Initiative: Historical Rocinha (Rocinha Histórica)
Contact: Facebook | Email
Year Founded: 2014
Community: Rocinha
Mission: Rocinha Histórica is a cultural/historical tour that offers the opportunity to positively experience the daily life of the Rocinha favela, with more than 100,000 residents, by taking walks through Rocinha’s alleys and side streets.
Public Events: Rocinha Histórica publishes upcoming tour dates on its Facebook page; attendance can be scheduled via WhatsApp (+55 21 99099 7006) or Facebook. On May 19, Rocinha Histórica will celebrate National Museum Week with a Rocinha walking tour and roundtable discussion on “Memory, Community-Based Tours, and Violations of Rights.”

“Rocinha is enormous. And her history is even bigger.” So goes Fernando Ermiro’s introduction to Rocinha, the largest and one of the best-known of Rio’s favelas, in the city’s South Zone.

If anyone can speak to the community’s history, he’s the one. Born and raised in Rocinha—he calls himself “indigenous” to the community—Ermiro graduated with a degree in History from the Pontifical Catholic University in Rio de Janeiro (PUC). Despite attending a selective, private university, Ermiro found his history courses lacking. “Within the history curriculum, what interested me? The history of Brazil, the history of the Americas—nothing made sense. I didn’t identify at all; I shared no identity with that history. The history of Brazil does not have anything to do with the Brazilian people.” From this critique of mainstream history studies came Ermiro’s desire to focus on the stories of his own community, its social history.

Ermiro coordinates two interlinked projects that promote this mission. The older of the two, the Sankofa Museum, was built over a decade by Rocinha residents to create a “collective memory,” preserving “the people, the stories, how they lived, why they came [to Rocinha], the way they made a living, how their lives were before. All of this.” The Sankofa Museum grew from a series of meetings to a published book, a website, and partnerships with organizations ranging from national, such as the Brazilian Institute of Museums, to local, such as the Maré Museum and the Favela Museum. From this experience with community museums came the idea of developing a “walking museum.” Four years ago, Ermiro and his Sankofa Museum partner, Antônio Carlos Firmino, created Rocinha Histórica. However people typically conceive of history, Ermiro says, “virtually, or in writing, or academically… we do walking.” 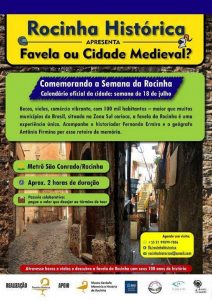 Community-led favela tours such as Rocinha Histórica are working to replace what Ermiro and many critics of jeep tours run by non-locals call “safari tourism.” Ermiro says he created Rocinha Histórica, in part, to “escape this predatory model” that had taken root since foreigners began visiting Rocinha in 1992. It made him uncomfortable, “as if we were a jungle” that tourists could watch and take photographs of from a jeep or van. “So we proposed creating an experience. Live my life. Don’t judge me. You can judge me afterwards,” he laughs. But first, “at least know how it is here.” Repeating the Portuguese version of the popular saying, Ermiro says that before you judge another person, you need to walk a mile in their shoes.

To achieve this, Ermiro meets tour groups at the São Conrado metro station. From there he tells the general story of Rocinha and helps the group visualize, geographically, the route they will take through the community. During the approximately two and a half hour tour, Ermiro’s hope is for groups to feel the “sensation” of what it is like to be in Rocinha, first through the impact of the size and geography of the space and “then, upon entering the community, of the people, noise, motorcycles, cars… The dynamics of the place.”

After a hiatus earlier this year, due in part to insecurity and police operations in Rocinha, the team restarted tours this month. Ermiro takes groups to the top of Rocinha, then walks them through the alleys, which he calls the true “experience of Rocinha… Your first entrance is one experience, but 90% of Rocinha’s streets are alleys.” Ermiro wants visitors to experience this “immersion,” to enter Rocinha’s “social history,” and to understand the questions about Rocinha’s history that he and his neighbors have been answering though their process of articulating collective memory. This means starting at the very beginning with the Tupis, the indigenous people who first occupied this territory, and working all the way to Rocinha’s current residents. “This more recent history is also part of the history of Rocinha… And as we say, memory is today. Memory is not just looking behind. So, what is happening today is already memory that will enter our tour route… Employment, work, access, education—all of this is recent memory. We have to talk about this.”

To this end, he reasons, “the question of the museum is not just memory. It is looking ahead, to social questions… How can I transform this? So, first, capture this memory. Then make use of it.” Throughout history, old and recent, Ermiro emphasizes that “the favela is the city… They are extremely connected… And they always were.”

In comparing the Sankofa Museum and Rocinha Histórica, Ermiro makes a distinction. “The museum has always been well-received,” while Rocinha Histórica “was born with the idea, precisely, of basically confronting carioca society.” As he describes it, Cariocas—natives of Rio—”are very prejudiced in their relationship to favelas. Cariocas do not want to come to favelas… People come from São Paulo, from Minas [Gerais], from the United States, from France, but Cariocas do not want to.” As a response, Ermiro says, “we opened this alternative path: come get to know the favelas. And come see what life is like on the other side… We teach that the best way of getting to know the other side is to cross the bridge. So come see how it is here.” To overcome all of Rio residents’ preconceptions about favelas, Ermiro believes, “we have to have conversations… to open this dialogue.” Ermiro admits that this is not easy. Cariocas, he says, “resist.” “The world comes [to the favela],” he says with a laugh, “but Rio de Janeiro maintains this distance.”

That’s not to say that the prejudices against favelas are insurmountable: Ermiro says he has witnessed an increase in younger people, largely middle-class college students, visiting. “So then in five, ten, fifteen years, it will change… There is confrontation now, but later there will be an opening.”

Rocinha Histórica’s focus on social history does not only serve visitors to Rocinha. Ermiro has been able to answer “questions from [his] childhood,” learning about everything from how the streets in his community got their names to why his own house was built the way it was. Ermiro says he always used to ask his mother, who built their home, why she didn’t build it more quickly. It was through Rocinha Histórica that he came to understand that for “a minimum-wage domestic worker, illiterate with seven children,” it was impossible to build the whole house at once. Not only were construction materials expensive, but residents also had to (and still have to) pay to have those materials moved up the hill to their building sites. “Now,” he says, only half-jokingly, “I know everything about construction, by talking with people.” Just through conversations, through living, “you end up becoming an expert.”

Ermiro sees his work with Museu Sankofa and Rocinha Histórica as inherently political. By making Rocinha’s social history available—by “capturing and distributing these memories” across various media—he can work to legitimize Rocinha’s past, present, and future. In Ermiro’s words, “Rocinha has been huge, and very influential, for a long time. It’s just that without knowledge of our own story, we end up not seeing the value of our own strength.” He believes that a reclamation of history is a way for Rocinha’s residents to recognize that they are “on the top of a diamond in the South Zone.” And, he says, “If you know your story, you are going to recognize your value. If you recognize your value, you are going to want to stay.”

See a slideshow of photos by Antoine Horenbeek from a Rocinha Histórica tour on May 17, 2018 [also on Flickr]:

*Rocinha Histórica is one of over 100 community projects mapped by Catalytic Communities(CatComm), the organization that publishes RioOnWatch, as part of our parallel ‘Sustainable Favela Network‘ program launched in 2017 to recognize, support, strengthen, and expand on the sustainable qualities and community movements inherent to Rio de Janeiro’s favela communities.