This is the final article in a five-part series on community museums and resistance in Rio’s favelas in honor of Brazil’s 16th Annual Museum Week (May 16-20, 2018).

The Museu das Remoções (Evictions Museum) in Vila Autódromo was founded on May 19, 2016, making it the city’s newest community museum. Vila Autódromo is a community in the West Zone of the city, located on the edge of the wealthy Barra da Tijuca neighborhood. Originally established in 1967 as a fishing community, the favela has faced eviction threats since the early 1990s. The community’s fight for land rights earned it a 99-year lease on the land in 1994, and in this same year the community was also declared a Special Zone of Social Interest, meaning the community must be preserved for socially equitable purposes. In 2007, pressure from eviction threats mounted ahead of the nearby Pan-American Games. However, it was not until Rio’s winning Olympic bid in 2009 that the City successfully seized on a justification to remove the favela. The government, having cited environmental reasons during the first threats of eviction, pivoted to claim that, among other justifications, there needed to be a security perimeter around the Olympic Park—a perimeter that the community’s land would be violating. The ‘myths of marginality,’ which sustain perceptions of favelas as centers of crime and violence, fueled beliefs that the community posed an immediate threat and danger, despite the favela having a history of being “peaceful and orderly” with neither drug trafficking nor militia.

The evictions involved misinformation, intimidation, violence and force, resulting in occasional clashes between residents and police. In the worst case, on June 3, 2015, police used violence and pepper spray to break up a human chain that 50 to 60 residents had formed around a home whose owner had not yet received compensation. Images from residents’ Facebook pages showed injuries sustained from batons, rubber bullets, and percussion grenades. Demolitions continued into 2016, as the government increased its removal efforts and shock troops frequently entered the community in force.

One slogan for the resistance movement, “Urbaniza já!” (Urbanize now!), highlighted the community’s demand for upgrades and investment in the neighborhood, rather than removal. Responding to a provocation to do so by the Mayor, community members with support from researchers from the Federal University of Rio de Janeiro (UFRJ) and the Fluminense Federal University (UFF) collaboratively created their own upgrading plan, the Popular Plan, which was presented to—but largely ignored by—the government. 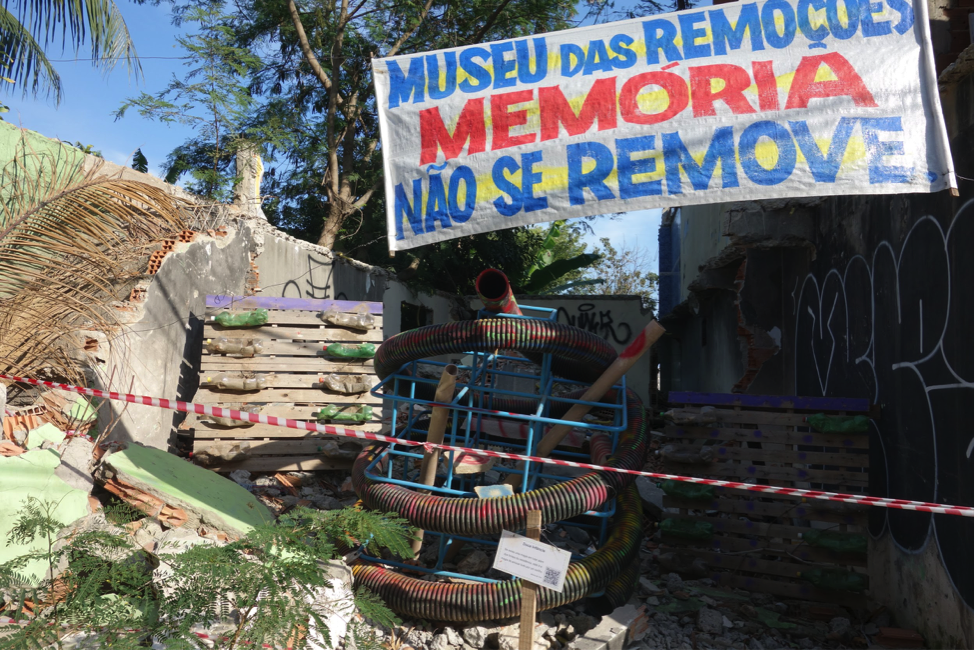 The resistance struggle received an unprecedented amount of media attention which helped pressure the municipal government into allowing the final remaining 20 families to stay in the community, albeit in a new row of uniform small houses. As a result, Vila Autódromo has become a symbol of resistance to eviction in Rio de Janeiro and even globally.

The Evictions Museum was conceived both to remember the processes of eviction and resistance of Vila Autódromo, and to stand as a symbol of hope for other communities threatened with eviction. One of the museum’s founders, architect Diana Bogado, explained:

“The point of the museum is to remember what Vila Autódromo was like before it was removed, and the violent process of removal. There is a real danger that the hegemonic narrative will be that residents wanted upgrades, and Mayor Eduardo Paes upgraded the houses of whoever wanted to stay. The story is nothing like that. Vila Autódromo was evicted. 3% have refused to move to wherever [the government] wanted them to go and they managed to stay to keep Vila Autódromo alive. We are fighting for our version of the story to be remembered. In Vila Autódromo, memory can’t be removed.”

One of the main differences between official and local narratives about this process relates to residents’ agency during the evictions. According to Rio’s mayor at the time, Eduardo Paes, “549 families didn’t need to leave. But seeing the change in lifestyle experienced by the residents that had already moved to Parque Carioca [public housing], and in order to make the most of the open negotiation opportunity, 531 asked the city government for relocation or compensation for moving.” An apartment in the Parque Carioca complex was the main housing option offered by the government in exchange for leaving Vila Autódromo, which was framed positively as an “opportunity.” Paes maintained that most of the residents wanted to leave Vila Autódromo to live in the “super-beautiful” Parque Carioca complex.

The claims made by Paes directly contradict reports by residents describing the use of force, fear, and intimidation to drive families out of the community. Residents said they were told by municipal workers they would have no option but to leave and would ultimately be forced out, so they opted for an early move to Parque Carioca to reduce the risk of further trouble. Divide-and-conquer strategies created divisions within the community and pushed some residents to leave. Dust and debris from early demolitions caused concerns about the value of properties and potential health risks. Though some residents were seduced by the government’s rhetoric and did choose to move to Parque Carioca, and others with larger houses accepted the significant compensation for their consent, they were in the minority. The circumstances under which the majority of residents moved were tense and high-pressure conditions. Furthermore, the reality of living in Parque Carioca was vastly different to the images the city government used to entice people to move there. New residents complained that the newly built apartments were “uninhabitable,” with plaster falling from the ceiling, and with leaks and blocked drains. Ultimately, many of those who left have sued the government.

This narrative, as experienced by the residents, is rigorously documented in the museum archive through photos, videos, newspaper articles, and oral histories. The archive will exist online in the near future and be available to browse on a website similar to that of the Horto Museum. Some archival material is currently available on the Evictions Museum Facebook page.

The museum has both an online and physical presence. Like many of the other community museums, the Evictions Museum is an open-air ecomuseum. It does, however, have a temporary indoor space in which the community has displayed photos exhibiting the process of eviction, as well as information about other human rights violations in the city during the preparations for the Olympic Games. This space also provides a place for former residents to come back to, share memories, and spend time with their former community. As with the Horto Museum, community members are present to take visitors around the space, show them the photos, and talk about the process of eviction.

The museum tagline “memory cannot be removed” is reinforced through installations constructed out of the debris left behind after the demolitions, representing seven different sites of memory. Each installation symbolically represents what used to exist in that space and the meaning it held for the community. One of these sites was the house of Candomblé practitioner Heloisa Helena whose house was also a religious center. Not only was she a central figure in the community but many traveled from across the city to visit her center. The demolition of her house stood out as particularly significant as it took the tone of religious intolerance against Afro-Brazilian religions. The corresponding museum installation is a circle, a recurrent image in Candomblé, separated in half by a wall made of broken bricks. One half has blue stones representing the community and the other half features a golden stone on top of a red brick representing how what was won by State power was won with the people’s blood. The circle suggests inevitability yet the stones point to the resilience of the community and nod to the museum’s tagline. 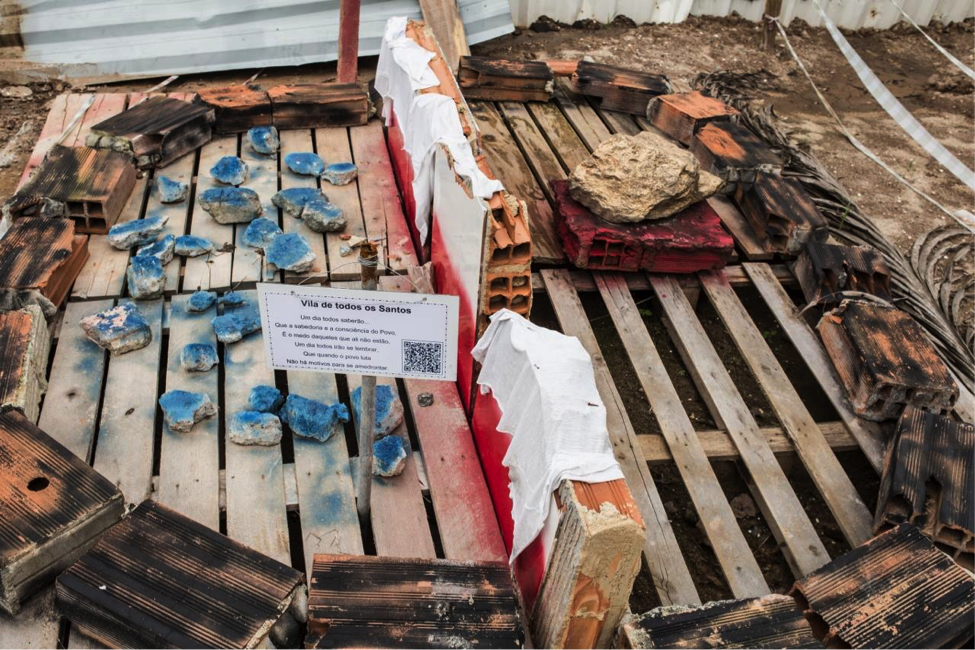 The poem on the installation reads:

The community museums in the favelas of Rio de Janeiro are primarily tools of resistance. This resistance manifests itself in a variety of ways, but arguably the most important is the explicit challenge to dominant representations. Given the typical legacy of a museum as a tool of ideological repression, it is also an appropriate and effective site for resistance against dominant ideology, and demonstrates how favela communities are not passive objects of power. The ecomuseum is a manifestation of how a museum can perform a revolutionary function. The museum provides a space for contestation and the renegotiation of power through representing alternative narratives, reinterpreting spaces, inverting hierarchies of knowledge, and actively addressing silences in the production of history.

The presence of museums in favelas has had an undeniable effect on the relationship between the favela and the city. Today four of the community museums have been officially recognized by the Brazilian Institute of Museums (IBRAM) and appear on the Ministry of Culture’s website.

The museums also represent a two-sided change: for outsiders, the presence of a traditionally elite institution in a deprived area sparks surprise and intrigue in a place they may have previously had no interest in visiting. For favela residents such as Anastasia, a teenager from Maré, the presence of a museum in her community has done much to challenge her previous conceptions of museums and has demonstrated how the museum is in fact an institution that can represent her community. “It’s our culture, it’s our history, that’s what a museum is.”

This is the final article in a five-part series on community museums and resistance in Rio’s favelas in honor of Brazil’s 16th Annual Museum Week (May 16-20, 2018).

Gitanjali Patel is a researcher and translator. She has an MA in Social Anthropology from SOAS, University of London. Her research looks at memory and the production of history in Rio’s favela communities.