On the night of May 19, Vila Autódromo‘s Catholic Church—a small, quaint, canary yellow building—opened its doors to celebrate the Evictions Museum’s second anniversary. Despite the heavy rain that preceded the event, over 35 people from various favela communities and civil society organizations were in attendance to celebrate Vila Autódromo’s fight against evictions in the lead-up to and following the 2016 Olympic Games.

Upon entering the church, attendees were greeted by a series of photos carefully strung up on two large metal structures. The photo exhibition, entitled “Images of Memory and Struggle,” depicted the community’s difficult yet victorious mobilization against mega-event-related urban developments in the last decade. 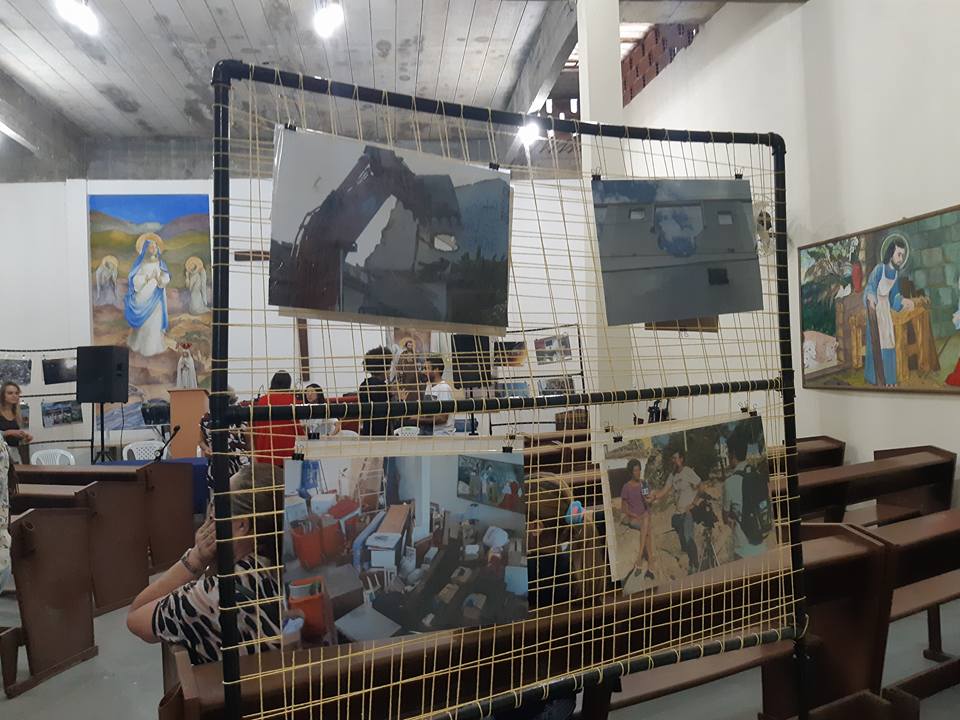 The night opened with the presentation and launch of the Evictions Museum’s official website. On the website, visitors can find a collection of photos, stories, documents, strategic plans, and online news articles related to Vila Autódromo’s history of resistance. Capturing the spirit of the Evictions Museum, the website constitutes one important space through which resistance can be remembered and, importantly, replicated by similar communities in Rio and around the world.

Following the launch, the night transitioned into its key event, a roundtable entitled “Hyperconnecting Publics—The Universality of Discourse Against Eviction.” Three representatives from different communities across the city, two public defenders, and one representative of Catalytic Communities* (CatComm) were invited to speak about their past experiences and what it means to take up the fight against eviction.

The first speaker, Maraci Soares from the community of Quilombo Camorim in Rio’s West Zone, opened the roundtable by describing how rising real estate speculation and the sustained threat of eviction throughout the entire Jacarepaguá region has been a source of constant stress for her community for years. Added to the long history of State oppression and neglect of quilombos, eviction threats are just one element in the drawn-out struggles that many communities like Camorim face.

Community leader Jaqueline Andrade Costa spoke to the ongoing struggle against eviction in Barrinha as condominiums and other private developments continue to rise in the surrounding neighborhood. She noted that while the experience has been difficult and traumatizing, the struggle has been made more palatable because many who have been evicted or have faced past threats in Rio are continuing to support those currently facing threats. She stated: “People are not leaving the fight. Why? Because we don’t know what will happen tomorrow. We need to always stay together in this fight because life is difficult. This is our movement, a movement of support. We have become companions in the struggle.” She continued on to say that solidarity is the key to ensuring the right to remain. “It is difficult to survive, but it is possible. This is why we need to help each other, to be here [at the roundtable], to come together and be in the fight. We all need to.”

Representing the communities of Rádio Sonda and Maracajás, Di Cunha explained how she learned about and became involved in the fight against eviction. Rumors of eviction are not new for either community, both of which sit upon federal land under the control of the airforce on Ilha do Governador. But in 2017, when the communities received yet another eviction notice, Cunha drew inspiration from Vila Autódromo’s strategies against eviction and reached out to other communities to learn more about how her community could resist. She reflected: “Vila Autódromo inspires me. We’ve learned a lot from Vila Autódromo. We learned how to fight and, as a result, we fight every day.”

Maria Lucia de Pontes and Adriana Bevilaqua, two public defenders, also contributed their perspectives. Pontes criticized the systemic factors that continue to perpetuate neglect of favelas across Rio de Janeiro. She argued that resistance against eviction is much bigger than just a fight to remain, as “it is a fight for another society, for another city.” Bevilaqua’s words were both encouraging and critical. While she commended the community’s resilience, she also acknowledged internal disputes within the Public Defender’s Office that have occasionally affected communities’ legal representation in their fights to remain.

Lastly, Catalytic Communities’ Roseli Franco presented a book chapter on Vila Autódromo’s evictions struggle written by CatComm’s Executive Director Theresa Williamson for Rio 2016: Olympic Myths, Hard Realities and highlighted the seven keys to successful resistance outlined in the chapter: “unity… access to information, legal defense, diverse and resolute leadership, broad networks of support… creative responses… and early and ongoing documentation and visibility.” Franco also shared some of the findings from the organization’s Sustainable Favela Network map and report, emphasizing that favelas have always been and continue to be important sources of environmental and social sustainability in an increasingly unequal city. Just as networks of resistance have emerged in a collective effort against evictions, Franco suggests that favelas can also strengthen local sustainability initiatives through networked forms of learning and exchange. 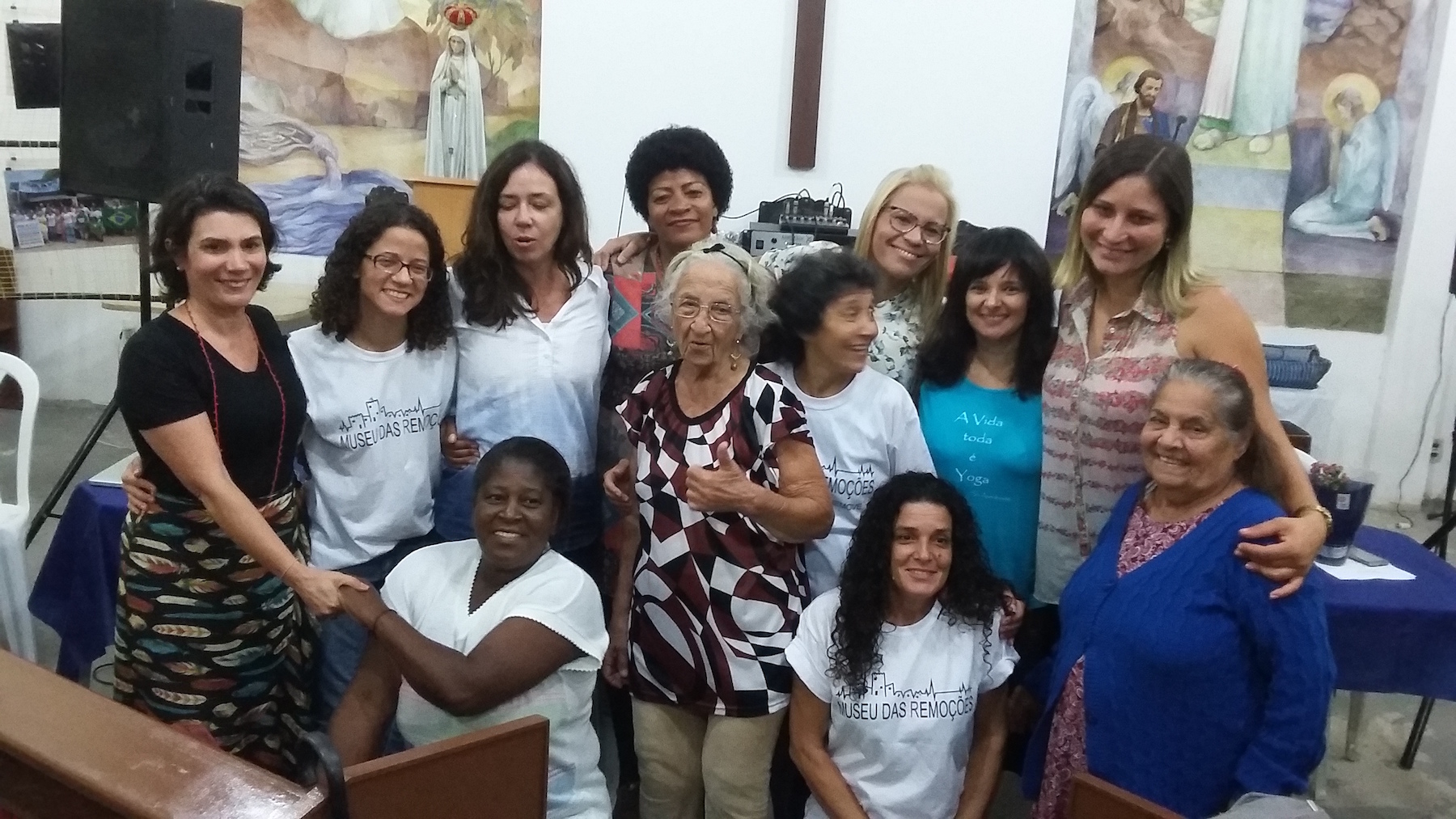 At the end of the roundtable, Vila Autódromo resident Natalia Macena wrapped up the evening by thanking the panelists reaffirming and responding to each of their words. Macena acknowledged the harsh realities of favela activism, but emphasized that favelas are stronger together. She noted: “Resistance cannot be done by ourselves, it has to be collective. If I am in this fight alone, I cannot achieve anything. But, if we fight this together, we will succeed. The change may be small, but we will succeed.”

More than a commemoration of the past, the second anniversary of the Evictions Museum celebrated and inspired emerging trends of activism among favela communities. As the threats of real estate speculation and gentrification continue to loom large in post-Olympic Rio, Vila Autódromo’s fight and legacy of resistance function as support, example, and encouragement to ongoing efforts of resistance.