In October 2017, three small houses under construction were marked and subsequently demolished in the small favela of Araçatiba, Barra de Guaratiba, Rio de Janeiro, destroying families’ physical and monetary investment and leaving several individuals with nowhere to live. Less than a year later, residents are again in panic after receiving news that the federal government is initiating a process to destroy three more houses in the community, potentially paving the way to put a total of 60 houses at risk. The story of Araçatiba is a long and complex one with control of the land passing between various government branches over several decades. However residents—many of whom have lived in the area for over 40 years—believe that a 2017 law allowing the regularization of lots on federal land will aid them in their struggle to stay.

Araçatiba is located in a lush green area in Guaratiba, in the far West Zone of Rio de Janeiro on the edge of the State Biological Reserve of Guaratiba which is now administered by the State Environment Institute (INEA). To arrive at the community, many residents of Rio would need to take a combination of buses or metro and bus, but the area is probably more familiar than they would expect. In 1977, media conglomerate Globo began using the area to film its famous soap operas, and the locale is featured in Kubanacan, Rei do Gado, and America, among others. This continued until 1986, and much of the infrastructure from those days was simply left in the region. The area, controlled by the Army at the time, was settled over the years with some new residents relocated there by the Army itself.

In 2006, the land was transferred from the Army to federal government control and later placed under the administration of the newly formed INEA. Araçatiba was left outside of the Reserve’s official limits. Residents fought to gain title of their lots and in 2012 the federal government began registering homes, the initial step in the titling process. However, while most of the houses were registered, some were left out and houses constructed afterwards were not registered at all. In 2014, the federal government initiated a process to evict several residents of the area, but the process was halted after three months and not revisited. And while the City told residents to halt all new construction, then-mayor Eduardo Paes promised that no evictions would take place in the community. Residents were stuck in limbo; they believed they had the legal grounding to be there, but they were afraid to develop and improve their community in case it was all for nothing. 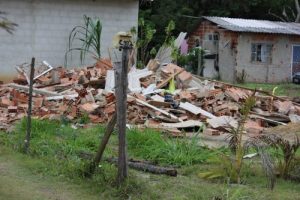 With a new mayor elected in 2016, the nightmare of eviction became a reality on October 3, 2017 when three houses were demolished. The demolition crew even made a mistake, destroying one house that wasn’t intended to be destroyed. Ever since then, the community has been actively fighting against the threat of eviction, but the horrors of that day are branded in their collective memory. “The federal government never came to talk with the Residents’ Commission,” remembered Ana Frimerman, a member of the new Residents’ Commission of Araçatiba. She explained that the federal government notified only one man claiming to be the Residents’ Association president at the time, who failed to relay the information. As of April 18, 2018, the federal government has once again entered into a process to evict residents. For now, three houses are facing demolition, with the federal government citing risk to the local ecosystem as the reason for removal.

“It would be necessary to remove the entire neighborhood of Guaratiba, not just one part. It doesn’t make any sense. It’s not just Araçatiba that doesn’t have plumbing or a sewage system. Almost none of Guaratiba has this,” claims Frimerman.

Residents say the federal government is seeking to pressure the electric utility Light to stop providing electricity, which they see as an attempt to push them out. “This is a way to take away their option to continue living in the area. Taking away electricity will make them give up the fight. It is utter cowardice,” stated Marcello Cláudio Nunes Deodoro, a resident of Indiana and member of the Popular Council who represented Araçatiba at a public hearing in Brasília on May 24.

However, residents do have hope. A federal law passed on July 11, 2017 by president Michel Temer allows for the regularization of lots on federal land. Araçatiba residents and their representative from the Public Defender’s Office have been citing this law as a means for the residents to receive land titles. Sadly, the attorney in charge of bringing the case on behalf of the federal government, Raphael Carneiro da Rocha Filho, shows no sign of being interested in exploring options to guarantee the community’s permanence. Instead, the federal government is attempting something rather absurd: according to documents from the Public Prosecutor’s Office given to Araçatiba community members, the federal government plans to use the land, which would be empty after the current residents’ eviction, to resettle 17 families currently living inside the boundaries of the State Biological Reserve of Guaratiba. The government cites environmental protection as the justification for why these 17 families must be removed from the Reserve.

The Federal Police is expected to arrive in the community sometime this week to deliver official notification of eviction, but residents are hopeful something will be done to stop the process. Frimerman concluded: “Not one public authority came to discuss, offer projects, bring improvements. People say that we are invaders but most of the people here saved all they had to buy the old lots. It isn’t just. It is not fair for the federal government to base their arguments in old laws, outdated laws. We want justice, real justice.”