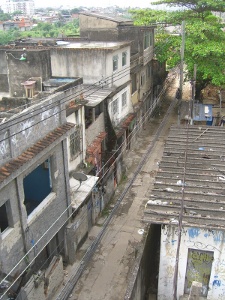 Vila das Torres (Towers Village) is a community of about a thousand homes and small businesses in Madureira, a neighborhood in Rio’s north zone. The community stretches down one street, Rua Dr. Cincinato Lopes (though this street name is no longer used), that runs just along the train tracks and connects the streets Rua Soares Caldeira and Rua Bernardino de Andrade. The single row of houses face the train tracks and thus create a sheltered, shaded area for the community. Large, lush, well-kept fields and gardens stretch behind Vila das Torres and separate the community from downtown Madureira.

The majority of the pioneers of Vila das Torres came from various Northeastern Brazilian states and from the state of Minas Gerais and began building their homes within this extra strip of land. Light paid some residents to build small ranches and gardens on the edge of its land to keep out potential squatters. Many of the older residents still work these fields and gardens as their main source of income. Today, however, few younger residents continued in their parents’ footsteps, so the community also has store managers, airport workers, computer technicians, and cashiers and stockers at the supermarket, among many others. 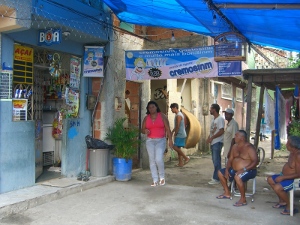 On December 10, 2009 Rio city government hosted an open air, outdoor show in Madureira and announced a joint plan with Light, to build Madureira Park, 113,000 m2, to become the third largest park in Rio. Initial promises that no one would have to leave Madureira in order to build the park were quickly retracted in less public settings, by holding meetings with residents of Vila das Torres. In the first meetings in December, residents were told that 540 apartment units were to be built and that the rest of the families would be fairly compensated.

After Carnival 2010, representatives from Rio’s housing ministry arrived to spray paint numbers on houses for removal. By May 2010, Rio city government claimed there wouldn’t be enough time to build the apartments, so all residents would either be moved to apartments in Campo Grande or Realengo (each at least an hour away from Madureira by public transportation) or compensated.

City government began calling families individually to negotiate prices for their houses, offering prices severely below housing values and in many occasions offering incoherent prices – higher prices for houses of lesser quality and lower prices for houses of greater quality. Through threats and coercion, city government was able to convince 317 families to accept unfair prices for their houses and to convince 264 others to relocate to the far away apartments. Many of those who received compensation are now watching their money run out as they pay rent because they can’t buy houses anywhere with the amount they received from city government. Of this vibrant community, only some 300 (including the upper segment which hasn’t yet been numbered for removal) families remain, fighting for fair prices for their houses, businesses, and land, so they can rebuild their lives elsewhere. A walk down Vila das Torres shows remnants of life and community alongside destruction and rubble.

I turned left in front of the train tracks and entered Vila das Torres with Eraldo de Oliveira, Neighborhood Association President, and Carlos de Souza, Eraldo’s right-hand man and unofficial Vice President, who asked me to call him “Carlinhos,” his affectionate nickname within the community. I was immediately met by two well-built but partially demolished houses. As I hurriedly searched for my camera, Eraldo said, “Don’t worry. There’s worse up ahead for you to take pictures of.” 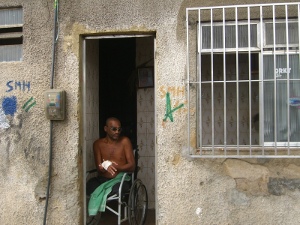 A few houses ahead, I met Artur, who sat in his wheelchair in the shaded entryway of his house with the front door wide open, listening to soft music on an old radio. Diabetes and other health problems have left him blind, unable to walk, and currently facing the possibility of losing an arm. Artur, 56, was born in Vila das Torres and is one of the residents still fighting for a fair price for his home in order to move. As I said goodbye and thanked Artur, Eraldo mentioned the community’s concern for sick and elderly residents, who haven’t received visits from Social Services about special accommodations for their relocation. Take Dona Eunice, for example. She’s 68 years old and takes care of her husband, Seu Germano, 80, whose illness and old age have left him bed ridden. Her son is mildly mentally handicapped and can’t always be counted on to take care of his father. To pay for her family’s medicine, she works three days a week cooking and cleaning in Rio’s sophisticated south zone and must live as close as possible to her work.

As we continued our walk, we were met by Ronaldo. Though walking towards town, he turned around and joined us, eager to share his story. Ronaldo, 37, was born and raised in Vila das Torres; he has a house and has owned a small business within the community for ten years. Because of the removal of the majority of residents, Ronaldo had no other choice but to close his store about two months ago. “I’m working in other things in the meanwhile until next year, to make ends meet. But there’s nothing certain. If the city government had offered me a fair price [for my house], I would have already moved to look for another job,” said Ronaldo. 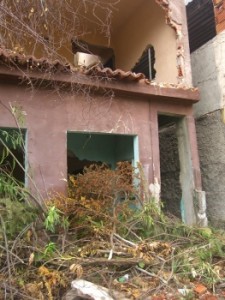 Ronaldo is one of many who have been told he won’t receive any compensation for his business, just compensation for his house. In addition to talking about his own family’s situation, Ronaldo also spoke about the loss of community life, “People would hang out and have fun outside until 1, 2, 3 o’clock in the morning. This doesn’t happen anymore because everything is so deserted. They took away our privacy. We used to be able to sit outside and play cards until whatever time we wanted, and there were never any problems.” Ronaldo alluded to the new lack of safety within the community, which we saw in the next few abandoned houses, facades shattered, full of plant debris. City government has left destruction sites open for months, and residents organized to fill the open structures with plant debris to keep out drug users and other trouble makers from outside the community. The residents came together to replace broken light bulbs in the abandoned houses so the street won’t be so dark at night. Despite the community’s efforts, insecurity in the community has increased extraordinarily. One lady in the community was robbed and assaulted on three different occasions in the same week on her way to work on their once safe community street. The community is also organizing around new public health issues, including rat, cockroach, and mosquito infestations brought about by the open debris and rubble.