On Thursday, June 7, the “Fala Vidigal” debate series resumed with the panel discussion, “DRUGS: A Lost War,” at Vidigal‘s Residents Association. The debate featured six speakers, and the main argument put forward over the course of the event was that the decriminalization of drugs would benefit citizens, especially those who live in favelas, because it would reduce the violence that results from drug trafficking. 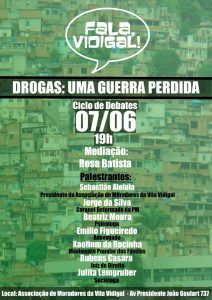 Panelist Jorge Silva, the retired Military Police colonel, told the audience that for many years he had believed drug users were worse than the traffickers. However, after reflecting on the type of society created from the prohibition of drugs, he realized that prohibition itself is the main issue, as it fuels the war on drugs which kills more people than drug use does. He believes that the population fears decriminalization because it fears any kind of change. He mentioned three types of damage caused by drug trafficking: that affecting individuals, families, and society.

According to Silva, the damage to individuals includes the consequences of using drugs, since it can turn a person into an unproductive member of society. Damage to families is closely linked to individual damage, and includes the consequences of an individual’s drug use for the family. Users often cause serious problems for their families whether via aggression, accruing expenses, or other impacts. The final type of damage, more perceptible to the lower-income classes, is constituted by the tragedies of the war on drugs. Continuing with his analysis, Silva reminded listeners that Brazil is the world champion of homicides, and a lot of this comes from the constant shootouts in favelas, where drug trafficking is networked. In Brazil, an individual has a higher chance of dying from a “lost” bullet than from an overdose.

The retired colonel also pointed out that, despite the aforementioned negative consequences, the capital generated by trafficking benefits a lot of industries, principally the arms trade. “When you go into a favela and spot a young kid with an AK47, you can be sure someone is profiting from all this,” he said. According to Silva, rich countries incentivize the war on drugs in peripheral countries, especially in Latin America, in order to sell arms to both sides, as much to the police as to the traffickers. He concluded that the violence generates great profit under the unregulated capitalist model in which our society currently functions. As a result, the groups that profit from drug trafficking have no interest in the decriminalization of drugs.

Felipe, of FAFERJ, was extremely critical of the war on drugs implanted in Rio and criticized Brazilian society, calling it hypocritical and moralistic. According to him, “the military intervention in Rio de Janeiro does not serve the favelas, it’s expensive and inefficient.” Often when someone argues against the military intervention, many people think they are defending drug traffickers, he said. For example, he explained, debates in the media and at universities have featured maliciously tinged questions such as: “If you don’t support the intervention, then what do you support?”

For Felipe it makes no sense to launch a military intervention aimed at repressing favelas in Rio de Janeiro while the country’s boarders remain so open. He pointed out that Brazilian drug traffickers do not plant drugs, but import them. Thus, Felipe reflected that it is illogical to try to combat drug trafficking inside the favelas before trying to prevent the entry of drugs into the country. To do so only makes it clear that politicians are more interested in creating a false image of responding effectively to the problem—showing heavily armed men in the city streets and repressing poor residents—instead of actually cutting off the base of the trafficking industry.

The speaker also pointed to the strong correlation between the drug trade and corruption. “Trafficking generates a lot of capital for a lot of people. Very large political capital that generates policies of fear.” He explained that many politicians base their political campaigns on exploiting the population’s fear of the violence caused by trafficking. For example, many candidates promise to step up repression against trafficking to win votes. In addition, this generalized fear can become a greater problem as it increases the stigmatization of favelas, creating an idea that the communities are only hotbeds of violence. This incites a discourse of hate towards poorer people, like the famous saying “the only good criminal is a dead criminal.” The fear of violence also means fewer people actively participate in political discussions, including in regards to the decriminalization of drugs. Felipe said FAFERJ often organizes events on the subject but many people do not attend because they are afraid they won’t be able to return home due to shootouts.

Another panelist, Heitor Silva, PhD in urban planning and member of MPF, believes that a serious problem for residents associations is the lack of much-needed unity in discussing community issues. In Complexo do Alemão alone there are 13 associations, which means any decision is decentralized.

Heitor Silva positioned himself in favor of decriminalizing all drugs, without distinguishing between heavier and lighter drugs. “This debate around soft drugs versus hard drugs, it’s just silly.” According to him, many cases of violence come from the use of soft drugs like alcohol (innumerable cases of violence against women or road traffic violence). As such, he concluded that decriminalization would reduce violence linked to trafficking in favelas. “We don’t want people involved with drugs. But what people really don’t want is this violence. The problem with drugs is there’s one view of it for the middle class and another for the lower class.”

Beatriz Moura, a social psychologist, brought yet another view to the topic, showing the usefulness of social psychology in dealing with young people vulnerable to the dangers of the drug trade. She commented that during her time working in female prisons in São Paulo she noticed that many women were in prison for drug use and in many cases for having done odd jobs to help out a trafficker boyfriend. However, while working in prisons she noted that the desire of many of these women was for their children not to make their same mistakes, so the best use of a psychologist would be in the communities themselves. She pointed out that today social psychologists try to go into communities and stimulate self-awareness as a form of preventing more young people from getting involved with trafficking. The psychologist affirmed that “people have to deconstruct the view that psychology achieves nothing and is only for people with money.” She argued psychology can help people to achieve self-awareness and create hope for potential improvements in life without young people needing to run towards trafficking.

As such, all the participating panelists spoke in favor of the decriminalization of drugs. There was a consensus that, currently, politicians and society in general are mistaken in seeing drug use as a question of public security rather than a health issue. This view leads to wars on drugs, creating extreme violence. This war kills more people than the actual use of drugs does. Therefore, the organization of more events like this and the population’s active participation in the debate are of extreme importance going forward.

Watch some videos of the discussion (in Portuguese):