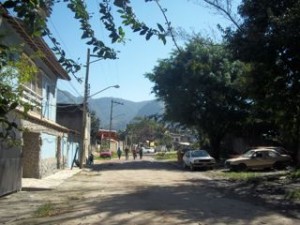 While the community of Vila Autódromo continues to resist eviction, most recently creating an upgrading plan to present as a viable, cost-effective alternative to removal, the city authorities maintain that the community needs to be removed for Olympic developments. The expropriation of land for the resettlement of the community is in the final stages of the judicial process. However, according to the city authorities’ own geological studies, the plot is in an area categorised as medium-high risk, while the community’s current location is identified as low risk.

After the heavy rainfalls in 2010 that caused tragic landslides across Rio, the authorities commissioned a study to identify risk areas. The resulting map by Geo-Rio, identifies the plot intended for the resettlement of Vila Autódromo’s 4,000 residents containing areas of 70% medium risk and 10% high risk. The identification of risk areas in this geological study has been used by the authorities as an argument to remove communities, yet in this case the authorities would be removing a community in a low risk area and resettling them in an area of risk.

Further environmental concerns that surround the land, situated four kilometers from Vila Autódromo on Estrada de Bandeirantes, Jacarepaguá, stem from its previous use. Until at least October 2007, the site was mined for gravel and sand. In such instances where polluting activities take place, a technical study into the potential impact for future residents should take place before the land is approved for housing, yet no study has taken place.

The authorities’ procurement of the land ran into controversy last year, as the City planned to make a direct purchase from the owner, Tibouchina company, for the inflated sum of R$19.9, a price 178% greater than the authorities’ Special Commission of Evaluation’s valuation of R$7.7. The purchase was halted in October of last year when the newspaper Estado de São Paulo revealed that the land’s owners had donated R$245,000 to mayor Eduardo Paes’ 2008 election campaign, and further donations to other municipal secretaries, including R$30,000 to Housing Secretary Jorge Bittar, in 2010. The city authorities immediately filed the case for expropriation.

Despite objections filed by city councilmen Paulo Pinheiro and Eliomar Coelho, and Vila Autódromo’s continuing organized resistance to eviction, the expropriation is likely to be approved in the next week or so.

However for the community of Vila Autódromo, who have been resisting eviction threats for twenty years, the fight to remain in their low risk, easily upgradable community continues.