The demonstration began with a mass in memory of the eight victims of the Candelária Massacre. Hundreds of people walked down one of the city’s most important avenues, Avenida Rio Branco. Children, residents of favelas and urban peripheries, and mothers who have lost their children to state violence—which disproportionately affects black youth—demanded an end to the federal military intervention and to the structurally racist model of public security in the state of Rio de Janeiro. Demonstrators chanted: “We don’t want tanks! We want funding for health care and education!”

At dawn on July 23, 1993, more than fifty people were sleeping in front of Rio de Janeiro’s most impressive and grandiose church, Candelária. Off-duty police officers targeted and shot individuals who possessed nothing but blankets; six of the eight victims were under the age of 18. Sleeping on the streets, these homeless youth reflect the failure to protect children and adolescents in the state of Rio de Janeiro.

To commemorate the massacre, the ground was painted with blood red outlines of children, resembling outstretched bodies. The majestic and historic church will always be associated with one of the cruelest crimes perpetrated in Brazilian history. Those found guilty of the massacre were sentenced to more than 200 years in prison, but thanks to judicial pardons, they were released before serving twenty year terms. One of the culprits is still considered a fugitive. 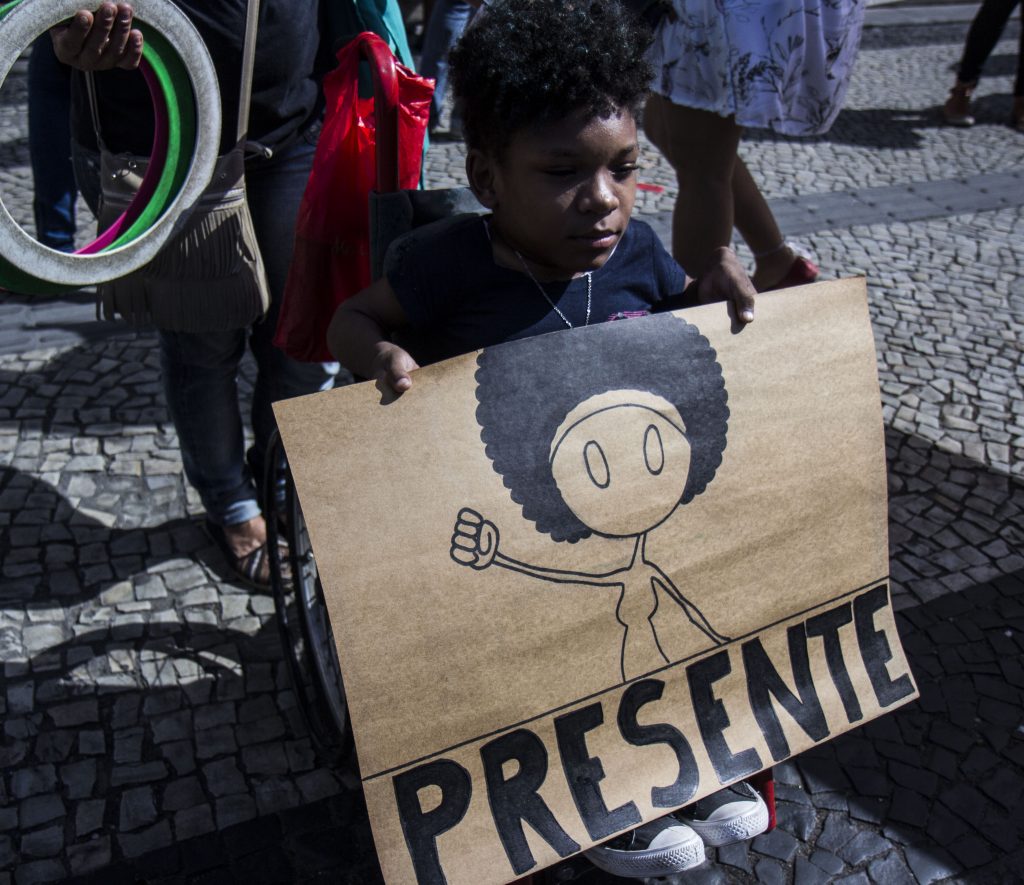 “The importance of being here is to remember [the tragedy] and never forget it. Additionally, there has been an increase in slaughters related to the federal military intervention. Now there are even helicopters attacking homes in favelas. There have been attacks in Maré, Rocinha, and many other places. It’s complicated to be here—it’s moving, it’s emotional—but it’s important to know that we cannot forget. Everything for the black population has always been a struggle, and today is one more day of that struggle,” said Patrícia Oliveira, one of the event organizers and a participant in the Network of Communities and Movements Against Violence and Candelária Never Again. Patrícia is the sister of Wagner, one of the survivors of the Candelária Massacre, who currently lives outside Brazil. 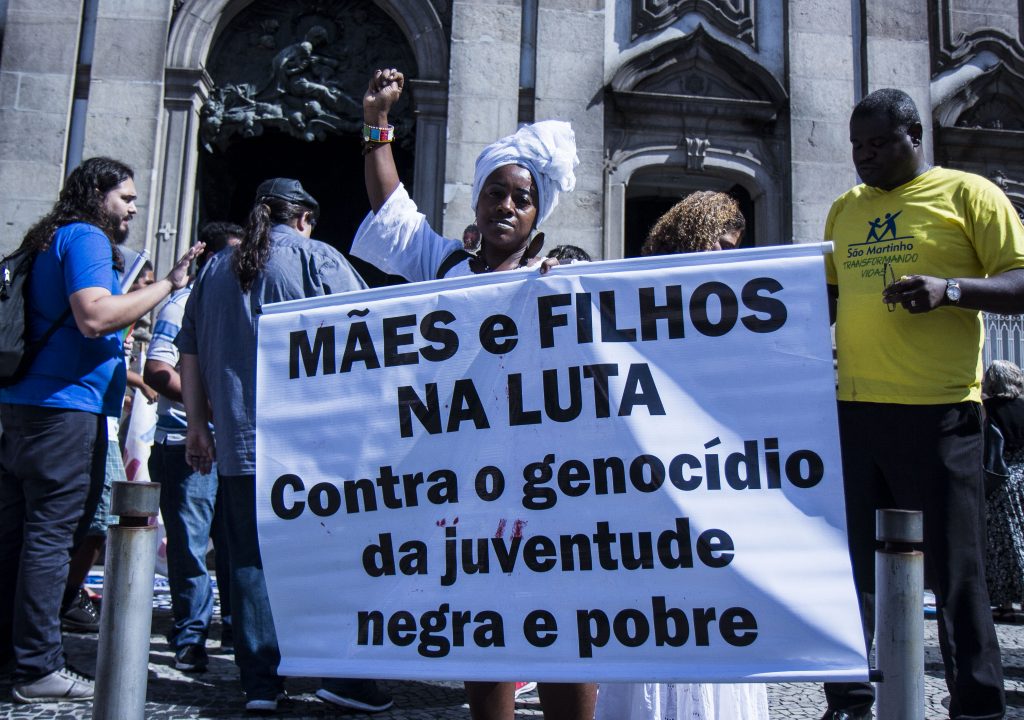 Rio de Janeiro’s lethality rate was extremely high in the early 1990s. According to data from the Institute of Public Security (ISP), between 1991 and 1995, homicide rates ranged from 60 to 64 murders per 100,000 inhabitants. While the homicide rate decreased in the following years, the numbers are still high and concerning. In 2017, the homicide rate was 40 murders per 100,000 inhabitants. This statistic fails to account for various other forms of lethal violence that are not registered as violent deaths—whether in hospital waiting rooms or in traffic accidents.

Repudiation of the federal military intervention was also heard in the chants of demonstrators marching from Avenida Rio Branco towards Cinelândia. Five months into the intervention, nothing has changed. For many, the project that was supposed to end violence in Rio has, in reality, only exacerbated the barbarism. In terms of chacinas (“massacres” or “slaughters”)—defined as the death of three or more people in the same event—the latest report issued by the Intervention Observatory indicated that between February and July 2018, such massacres increased by 80% compared to the prior five months. This means there have been 119 deaths resulting from 28 massacres—such as the cases in Caxias in April, Maré and Chapéu Mangueira in June, and Mangaratiba and Queimados in July.

Furthermore, other statistics about the inefficiency of the federal intervention are alarming: shootouts have increased by 37%, while the seizure of rifles and machine guns has decreased by 39%. The result? Widespread fear of stray bullets. It doesn’t matter where you are going. It doesn’t matter how the target is dressed. The case of 14-year-old Marcos Vinícius, murdered in Maré while wearing his school uniform, exemplifies this situation. 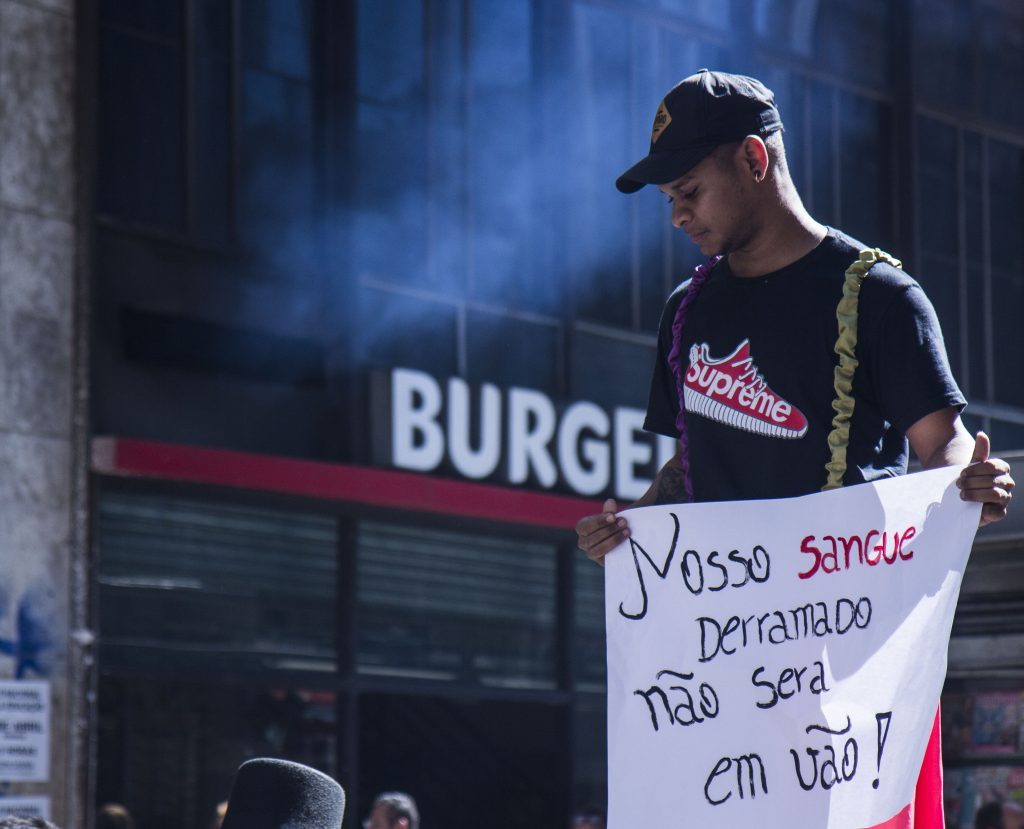 The Candelária Massacre is a reminder that twenty-five years later, two serious problems in the state of Rio de Janeiro have not been resolved (or subdued, for that matter)—homelessness and the situation of children killed by gunfire. Each night, homeless people continue to sleep in the streets near Candelária, lacking dignity and a roof over their heads. In 2016, according to data gathered by the City, there were 14,000 people living in the streets of Rio de Janeiro. The number may actually be greater. It appears that the situation has continued to deteriorate given widespread unemployment. Stray bullets continue to destroy childhoods in this state. The NGO Rio de Paz reports that 50 children have been killed by stray bullets since 2007; 28 were killed in the last two years.

Monday’s demonstration was part of Julho Negro (“Black July”), an event started in 2016 by human rights movements. Many members are mothers whose children were victims of state violence. This year’s event seeks to internationalize the resistance, featuring activists from Palestine, Chile, Colombia, South Africa, Argentina, and other countries. Between Monday, July 23 and Saturday, July 28, events are taking place throughout the city, with debates on religion, human rights, occupations, and the militarization of everyday life, in an outcry for the lives that have been violated, militarized, and discarded. See the schedule here.

Rithyele Dantas is a journalism student from Morro da Cruz in Andaraí. Dantas is a photojournalist and has worked as a community educator and parliamentary assistant in Rio. She is also the founder of the blog Jornalistas Pretas, a project that she believes to be important in guaranteeing human rights.