Bordering the Pedra Branca State Park, one of the largest urban forests in the world and an important biodiversity conservation site, lies Quilombo do Camorim—a community of twenty families who self-define as descendants of runaway African slaves. For community members, connections to their ancestors provide strength and inspiration. “What brings me happiness is reviving the history of our ancestors, my history, and the history of the generations to come,” says Adilson Almeida, founder and president of the Quilombo do Camorim Cultural Association (ACUQCA). Founded in 2003, ACUQCA seeks to protect the historical, cultural, and environmental heritage of Quilombo do Camorim through art, culture, gastronomy, and ecotourism.

Camorim’s history dates back to the indigenous Tupi-Guarani who inhabited the area before Portuguese colonization. The name Camorim comes from the Tupi word for a type of fish caught by local inhabitants. In the late 16th century, colonial governor Salvador Correia de Sá claimed the area for his plantation and sugarcane mill and divided the territory between his two sons. In 1622, his son Gonçalo de Sá constructed the mill and kept the indigenous name, calling it “Engenho do Camorim.”

Almeida has documents showing that his own ancestors arrived enslaved from Angola hundreds of years ago. One document, from 1712, documents the sale of one of his ancestors to a farm in the state of Minas Gerais, from which he fled and returned. “They would not adapt to slave work. So they fled into the forest, where they created this quilombo,” Almeida explains. Now part of the state park, there are trails that retrace the steps of those who resisted slavery. There are also small caves, used by fugitive slaves as hideouts, located throughout the forest on the way to Pedra do Quilombo—a peak that served as an important lookout for inhabitants of the quilombo.

Recently, the National Institute of Historic and Artistic Heritage (IPHAN) certified the Engenho do Camorim Archeological Site as a place of cultural and historical significance. Since 2016, doctoral student Sílvia Peixoto has helped find thousands of fragments of ceramic vessels used for sugar production, as well as dishes, tools, and pipes used by slaves and indigenous ceramics.

Almeida, 49, started practicing capoeira at age 12 and has continued ever since. Capoeira was originally practiced by enslaved Africans in Brazil as a form of protection against the violence and repression of Brazilian masters. While they were forbidden from engaging in any kind of struggle, they disguised the martial art as a dance, using traditional rhythm and movements. Almeida’s interest in capoeira and his experiences with his grandmother, the daughter of slaves, sparked him to learn more about the quilombo‘s history and culture.

Driven to do something for his community, in 1998, Almeida asked himself: “Where do I come from, who am I, and where do I want to go?” To answer these questions, Almeida began to seek out knowledge and share the history of his community with others.

As explained by Almeida, Quilombo do Camorim seeks to connect the past to the future in order to break down stereotypes and initiate conversation. Despite continued marginalization and discrimination, Almeida remains proud of being a quilombola: “It’s here where [my ancestors] arrived, suffered, and died.”

ACUQCA has an actively engaged 10-member Board of Directors and dozens of volunteers and collaborators, who together host a variety of events and workshops that share the quilombo’s cultural traditions as well as strengthening black and quilombo identities. Events such as the annual feijoada in honor of Afro-Brazilian resistance leaders Dandara and Zumbi dos Palmares help deconstruct negative images of quilombos and the racism and prejudice that result from these stigmatized perceptions. They also host events and workshops for capoeira and African dances like jongo, a communal dance brought by enslaved Bantu. 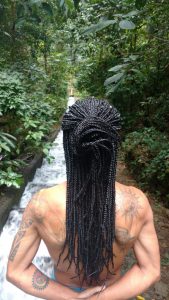 Part of Quilombo do Camorim’s strength stems from the community’s strong connection to nature. The community has planted thousands of trees over the years, including indigenous trees such as the guapuruvu (Brazilian fern), historically used by indigenous peoples to make canoes. He is inspired by indigenous peoples’ connection to the land and environmental preservation practices. “The best temple that I have is fresh air,” Almeida says. “Today I say that my religion is God and nature.”

Among many projects, the initiative trains youth in the quilombo to be tour guides, leading hikes that incorporate significant historical sites and natural landmarks along the route. Visitors leave the tour with knowledge of an often-untold part of Brazil’s history. Currently, they have trained approximately 60 youth in eco-tourism.

As stewards of their ancestral lands, ACUQCA also regularly hosts reforestation and park clean-up events. “When you start caring, you are also cared for. Those who love, care, and those who care, are loved,” Almeida affirms. ACUQCA is also working on an organic vegetable garden to provide the community with fresh produce and to rescue old ways that their ancestors connected with the land, planting fresh food while respecting nature and the environment.

In recent times, Quilombo do Camorim has faced difficulties including opposition to their recognition as a quilombo and construction on land claimed by the quilombo—including on the site of an ancestral burial ground—to make way for an Olympic media village for international journalists (now a private condominium complex). The condominium’s construction led to the deforestation of hundreds of trees and caused a diversion in the flow of the Camorim River, impacting residents’ water supply.

Almeida says he lacks the words to fully express how it felt to see the destruction of his ancestors’ lands: “To be honest, I just cried—on the street, I cried. To see those trees [being destroyed], it was like a part of me was being destroyed. It was a really bad feeling to lose a part of myself, a part of my history, a part of my ancestors who were there.”

Nonetheless, Almeida welcomes residents of the condominium complex to attend events at the quilombo and encourages them to learn about the history of the place where they live.

With support from friends and allies, Quilombo do Camorim remains resilient—despite continuous challenges to keep its traditions and culture alive. ACUQCA manages community improvements with little outside financial support, including the achievement of the official recognition necessary for the community’s preservation.

Despite the constitutional guarantee of quilombolas’ right to land and cultural preservation—complemented by a 2003 presidential decree that establishes procedures for identifying, demarcating, and titling these territories—few have actually received titles (less than 7% of recognized territories across Brazil). In 2014, the Palmares Cultural Foundation (FCP) certified Quilombo do Camorim, recognizing the community’s self-identification as a quilombo. However, FCP certification is only the first step toward gaining collective land titles. The second step of the process involves the National Institute of Colonization and Agrarian Reform (INCRA). While community members first initiated the process with INCRA in 2004, Quilombo do Camorim has not yet been titled.

Using the Past to Look Toward the Future

Almeida has a tattoo of the symbol of Quilombo do Camorim, a sankofa—an adinkra symbol of a bird looking backward while securing an egg that symbolizes life. “Always looking backward, he’s never going to forget his origins. It’s about returning to the past—looking at your origins to learn good things to bring to the present and build a better world,” Almeida said.

Almeida sees his role as leaving a legacy of Afro-Brazilian historical and cultural resistance for youth in Quilombo do Camorim and in Brazil: “From the moment children develop their own identity, knowing who they are—having a past, present, and future—they can be whoever they want to be.”

One of Almeida’s ongoing dreams for the future is creating a cultural center, which would help preserve Quilombo do Camorim’s historical, cultural, and environmental traditions and memories. “It’s not just the quilombo’s history,” Almeida said. “It’s a history of this country.”

*The Quilombo do Camorim Cultural Association is one of over 100 community projects mapped by Catalytic Communities (CatComm), the organization that publishes RioOnWatch, as part of our parallel ‘Sustainable Favela Network‘ program launched in 2017 to recognize, support, strengthen, and expand on the sustainable qualities and community movements inherent to Rio de Janeiro’s favela communities. Check out all the profiles of mapped projects here.