For original article in Portuguese in published in G1 click here.

One protester said “there are a series of human rights abuses.” Asked by G1, the City’s press office has yet to respond. 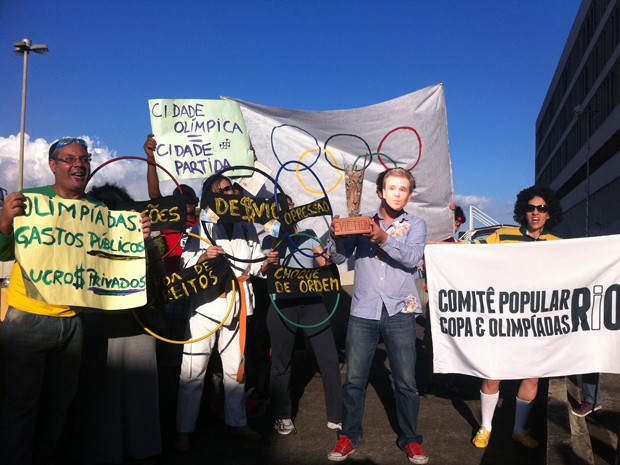 Activists from the People’s Committee of the World Cup and Olympics protested on Monday afternoon (August 13) against the eviction of families by the City government for infrastructure and transport works, many in preparation for the 2014 World Cup and the 2016 Olympics.

The protesters, near the Infraero administrative building at Tom Jobim International Airport on the Ilha do Governador, awaited the arrival of Mayor Eduardo Paes and Governor Sérgio Cabral, who were returning from London with the Olympic flag.

The People’s Committee is comprised of representatives of various civil society movements and organizations, as well as community leaders. According to Clara Silveira, a lawyer, the Committee questions the impacts and legacy of the World Cup and the Olympics. “The City is committing a series of human rights violations, such as the evictions of families from poor communities, the persecution of informal labor by the authorities, and the forced moving of the homeless,” she said.

At a news conference, mayor Eduardo Paes countered the critics: “The only resettlement process relating to the Olympics is happening in Vila Autódromo, where the Olympic Park will be. No other (community) is involved.” Paes also said that all the families from Vila Autódromo will be relocated somewhere close to the favela. He emphasized that “nobody will be thrown out without being given alternatives. People will only leave after a lot of debate and conversation. There is no example of people having their rights infringed upon.”

He also stated that the protest is of a political nature: “In Rio de Janeiro there are always troublemakers, people who go against things, and for that reason the city was stagnant for years. Later, these on-call activists will disappear, as always.”

Protesters want to give ‘Eviction Trophy’ to the mayor

The protesters are promising to give the mayor an “Eviction Trophy:” a brick in a metal case and cement stones. Clara Silveira explains that the “Eviction Trophy symbolizes the changes that the Mayor has made in our city in recent years using the World Cup and the Olympics as an excuse. Thousands of families are being thrown out of their homes in an aggressive manner by the council and they are being moved very far away from where they lived to areas with little or no infrastructure, and many will barely be compensated.”

According to members of the committee, the communities Vila Recreio II, Restinga, and Vila Harmonia were removed to make way for the BRT Transoeste bus line, and Campinho and Domingo Lopes likewise for the BRT Transcarioca. “We believe that were it not for the Olympics the BRT lines could have taken a different route that would not have destroyed these communities,” the lawyer observes.

Renato Cosentino, a journalist, says that 30,000 people will be evicted from their homes in Rio. “Five communities have already been fully removed, and 24 are threatened with eviction.” According to Cosentino, Vila Autódromo will be removed to make way for the Olympic Park.

Cosentino also says that AECOM, the British firm who won the bid to build the park, maintained the community in place in its proposal. “So the City found another argument, stating that a curve of the BRT Transcarioca should pass right over part of Vila Autódromo. However, an official video shows that this curve is not necessary and that it quickly returns to the original straight line of the BRT,” the journalist concluded.