Saturday, February 9 was a day of celebration and struggle for Vila Autódromo, the community that vehemently resisted pre-Olympic evictions next to the 2016 Olympic Park in Rio de Janeiro. The cultural occupation was organized with the aim of pressuring Mayor Marcelo Crivella to fulfill the City’s agreement to upgrade the community (signed in 2016) and demand that the name of the “Olympic Center” Bus Rapid Transit (BRT) station be changed to “Vila Autódromo” BRT.

March Through the BRT Station 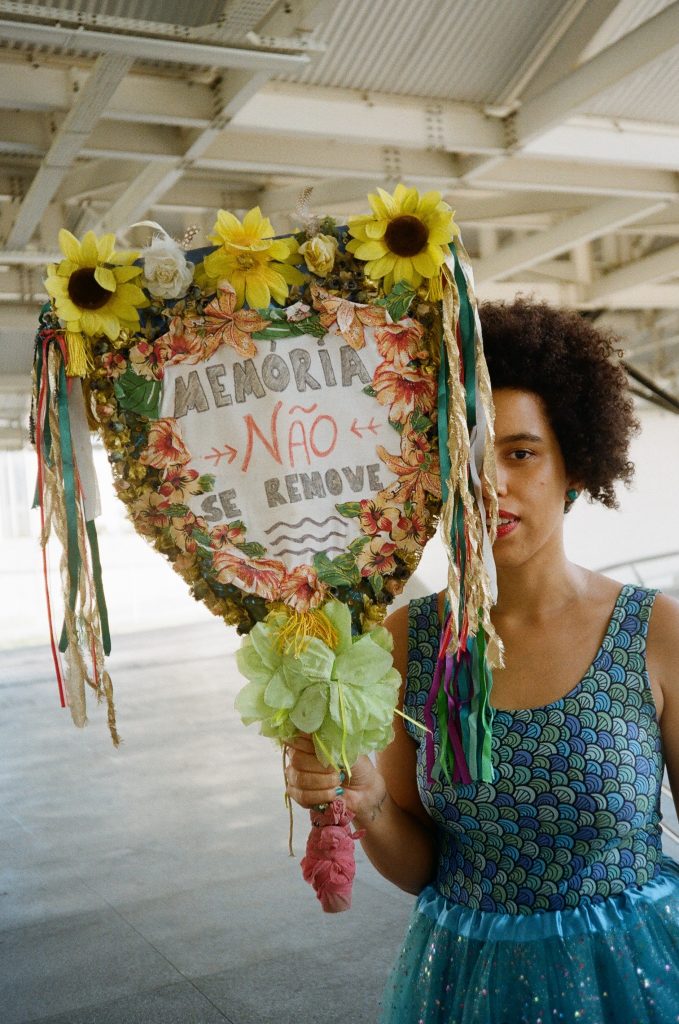 The community’s motto is “Vila Autódromo exists, resists, insists, and re-exists.” The community, which began to be constructed in the 1960s on the banks of the Jacarepaguá Lagoon in Rio’s West Zone, has suffered countless eviction attempts over the course of its history. The urgency of the community’s fight for permanence and for dignified housing in the city of Rio de Janeiro made Vila Autódromo an international symbol of the struggle for housing rights. Cultural events organized by residents of Vila Autódromo were a way that they found to “insist” and “resist” before authorities. 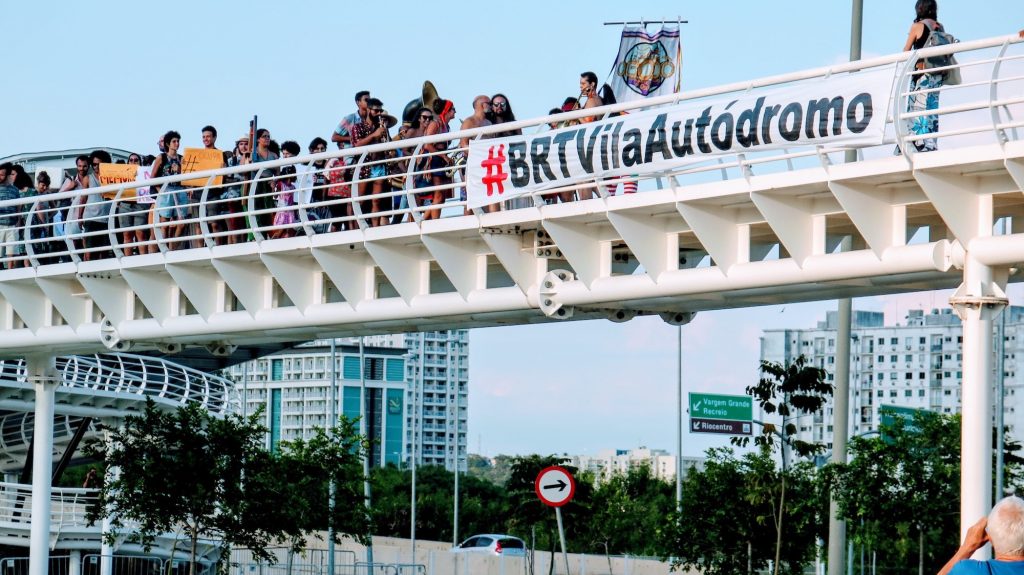 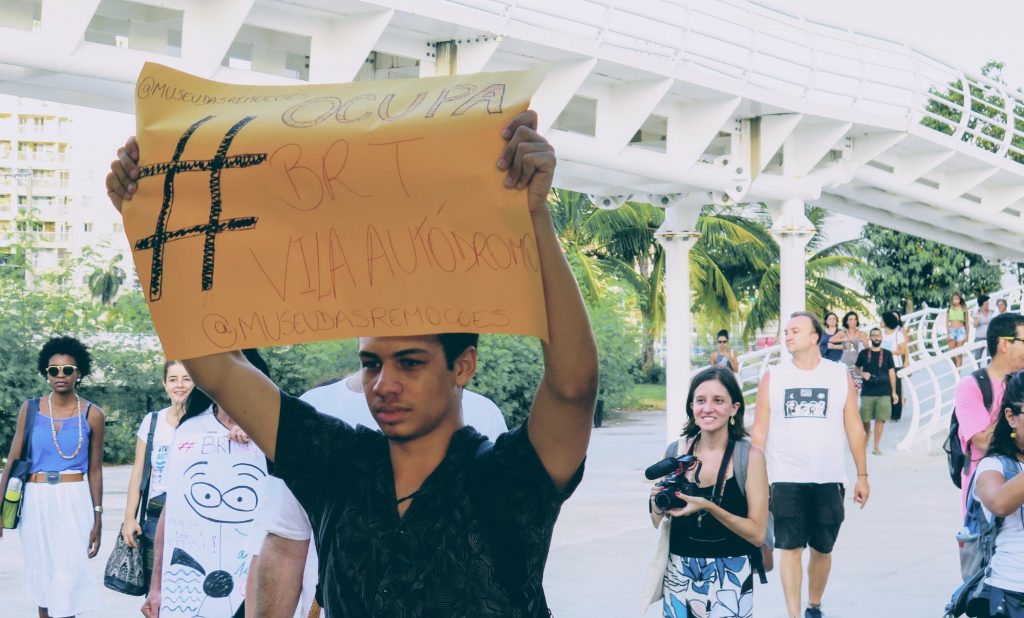 The first part of the event took place at the Olympic Center bus station due to the memories associated with this site. As stated by resident Sandra Maria de Souza: “People arrive here without knowing the history of the place, without understanding what happened here. This was the doing of [the architect] who designed this absurd thing. But I’m going to explain why they did this—why they created this structure: to justify the eviction of many people. This structure justified the eviction of an entire street full of homes, of people.” 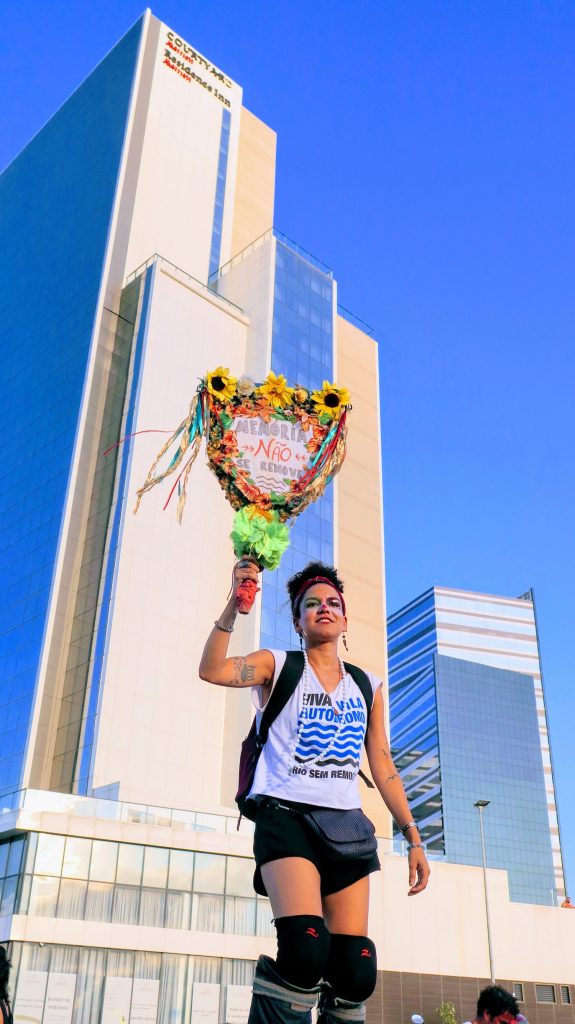 The occupation of the BRT station transformed into a beautiful procession in the direction of the community. To Carnival beats, the “Biquinis de Ogodô, featuring Sungas de Odara” marching band led participants across the overpass, eventually arriving in the community. 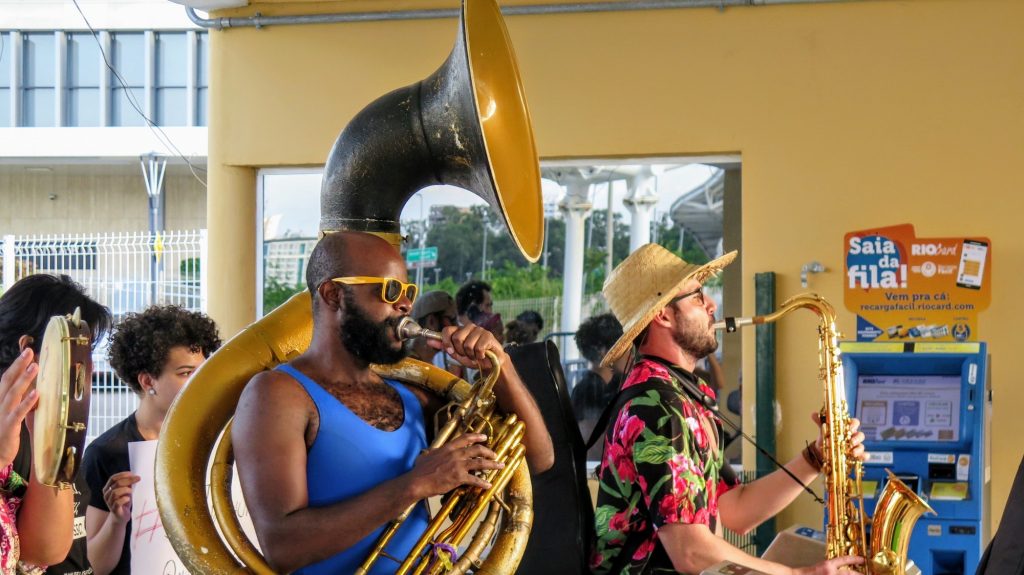 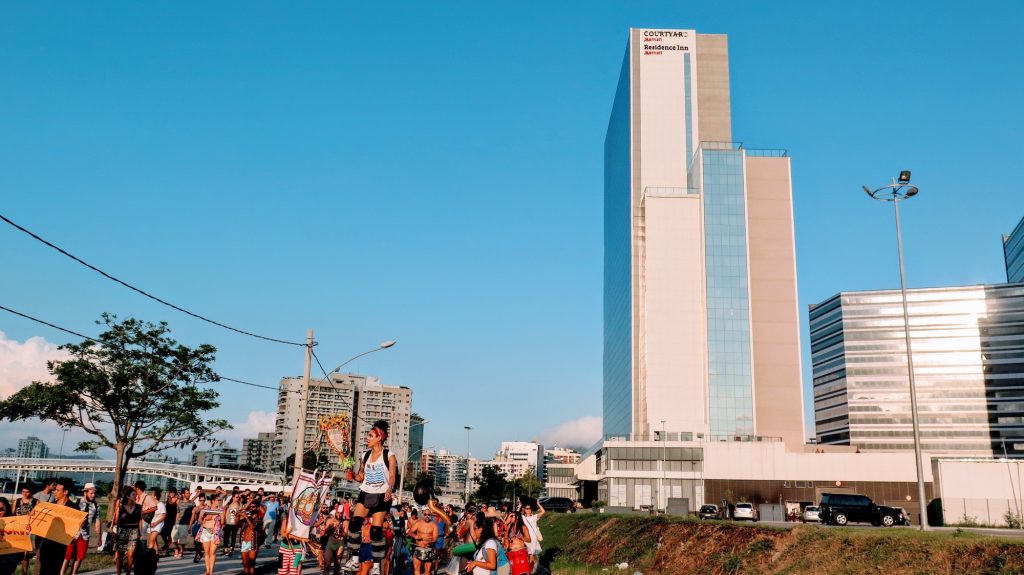 The Warrior Women of Vila Autódromo

Among those present were residents evicted from Vila Autódromo who came to speak about the struggle and take part in the continued resistance effort. Jane Nascimento and Jacília dos Santos were among the former residents in attendance.

Icons of the resistance movement Maria da Penha Macedo and Sandra Maria de Souza, both of whom managed to remain in the community, led several activities. Macedo showed her passionfruit garden to the visiting allies, while Souza coordinated the activities that followed alongside the church. 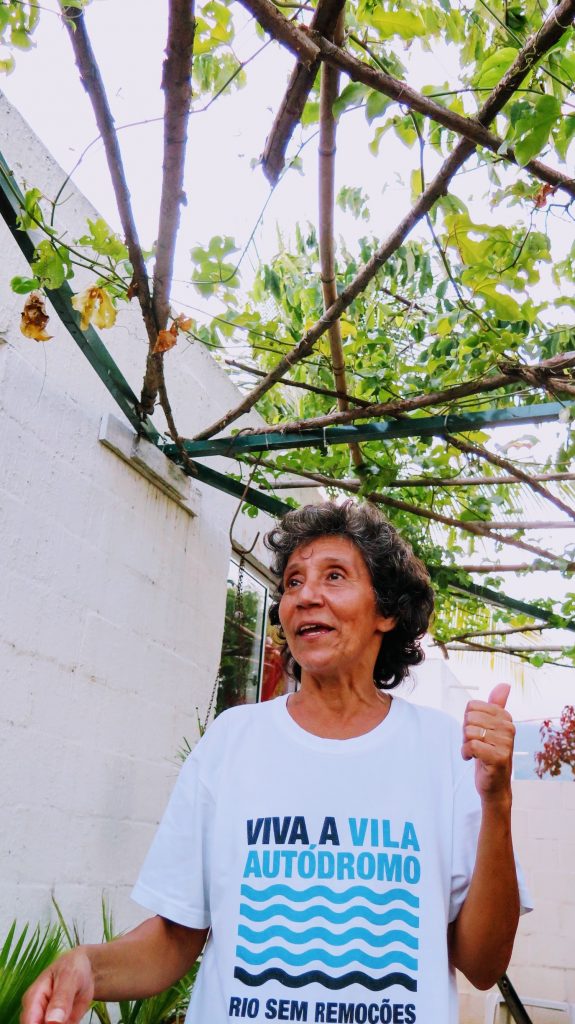 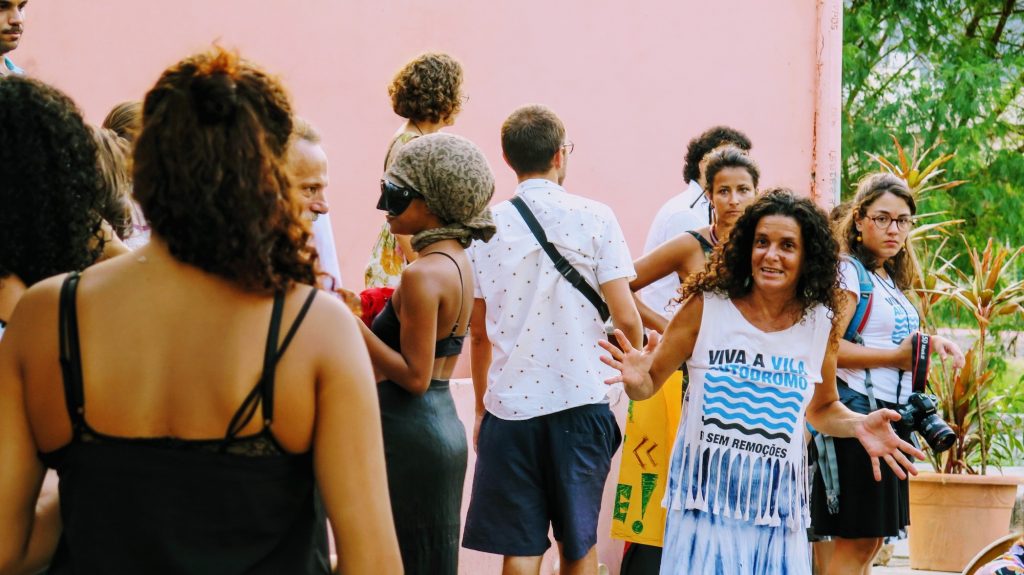 The event featured the participation of several volunteer groups of artists, including the performance of the piece “Amazona,” which recounts the story of the land’s revenge on the city. The performance concluded with each audience member receiving a handful of dirt and a seed. The idea was to re-plant life where the asphalt had taken over, searching for holes, interstices, and cracks capable of harboring nature’s regeneration. 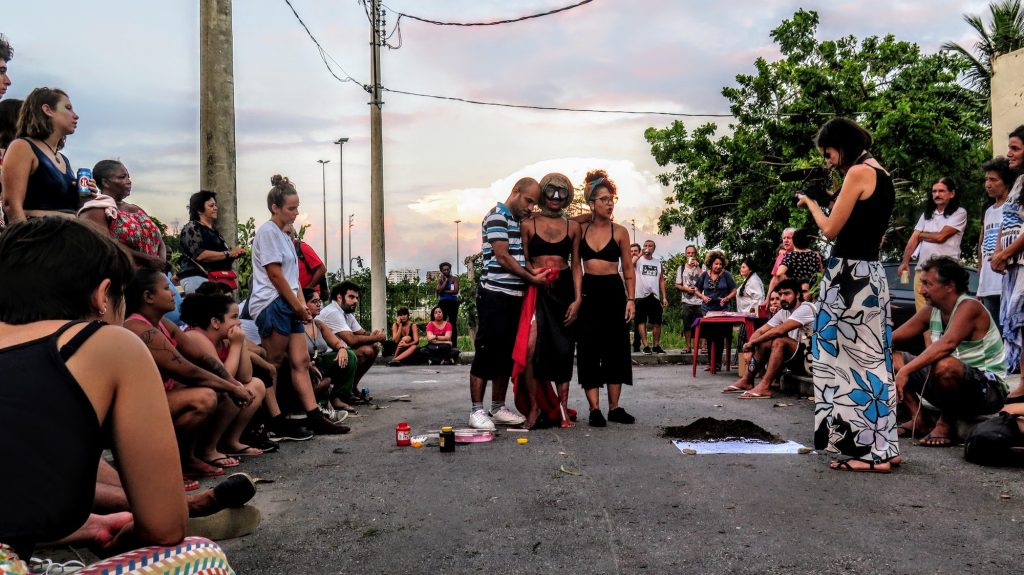 A Popular Plan That Resists

The day’s activities concluded with the launch of the book Viva Vila Autódromo: The Popular Plan and the Struggle Against Eviction, organized by the Laboratory on Labor, Territory, and Nature (ETTERN) of the Federal University of Rio de Janeiro (UFRJ). The final moments of the event featured speeches by professors and residents who were involved in the creation of the Popular Plan.

Inalva Mendes Brito, a former resident of Vila Autódromo and one of the organizers of the Popular Plan, emphasized that she had always advocated for issuing land titles in women’s names. “While men go away and travel, women remain in the struggle. This is how we demand our right to housing, to [our] homes.” 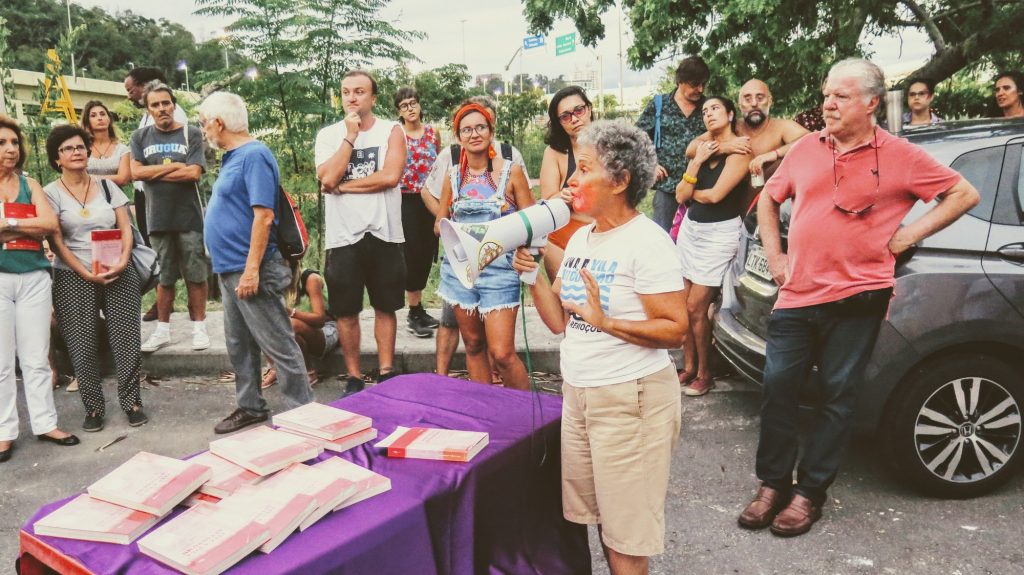 The day ended on an optimistic note. Vila Autódromo’s struggle remains alive, with residents committed to guaranteeing their rights.

See the photos from the occupation below (or click here):