Horror or revelry? There is a bit of both in the history of the emergence of carnival clowns known as bate-bolas (“ball-hitters”). At once scary and performative, historians date their origins to the start of the 20th century, when carnival in Rio de Janeiro did away with waltzes and opened the doors to samba. At that time—when Carnaval was still a party for the wealthy and, thus, the few—inspired by the clowns of the Revelry of the Kings and the magical masks of Venice, masked performers began to take to the streets, from the alleyways of favelas to the suburbs, countering the bourgeoise and the prevailing public order of the time. 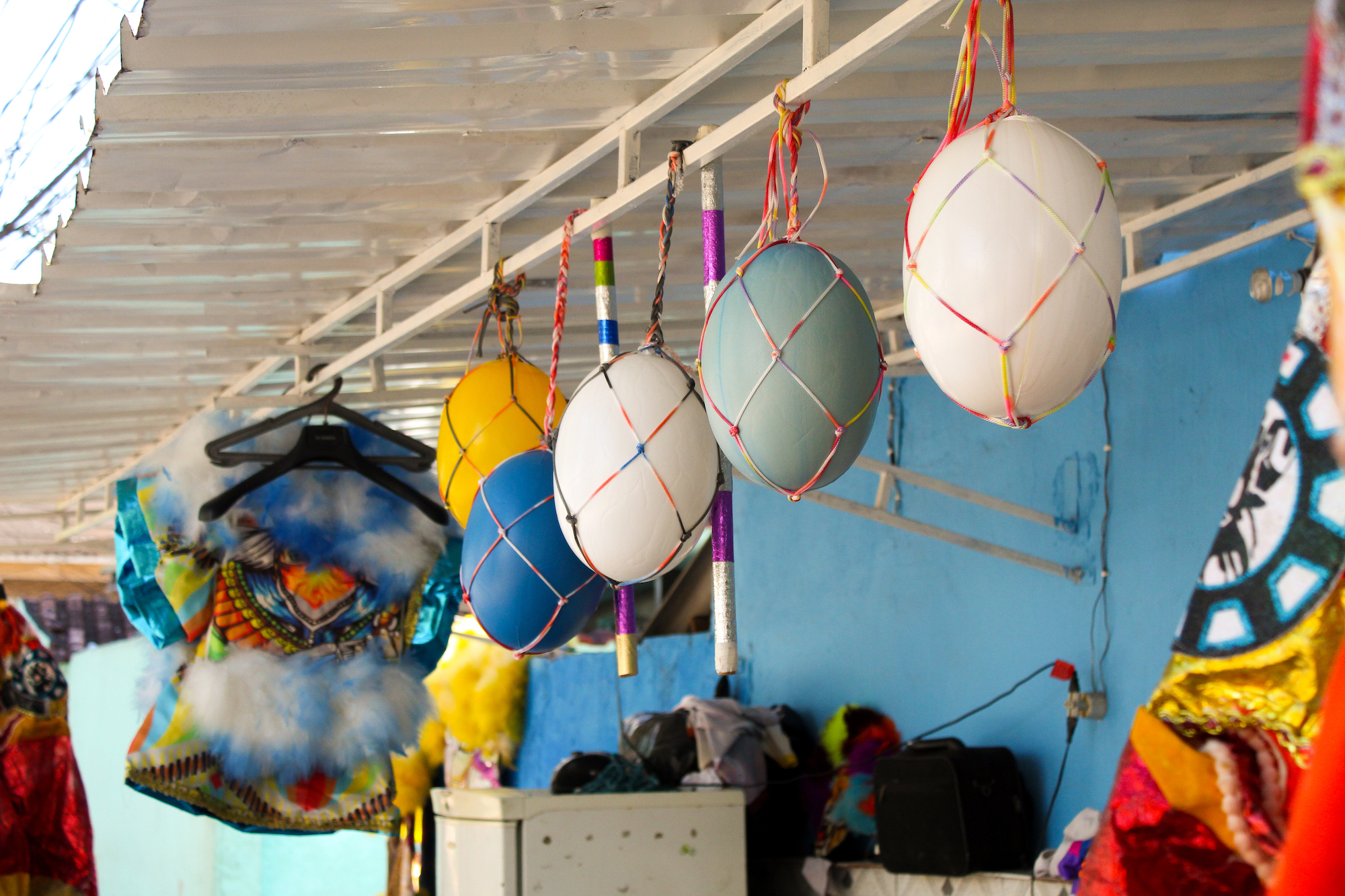 But I’ll leave it to historians to tell you the minute details and order of events that led to the emergence of this cultural expression. What I do know, with certainty, is that from those times to present day, there have been bate-bolas—groups formed of men, women, and children of diverse ages and backgrounds in the city—the real kings and queens of Rio’s street carnival responsible for democratizing the festivities and flooding the streets with people. 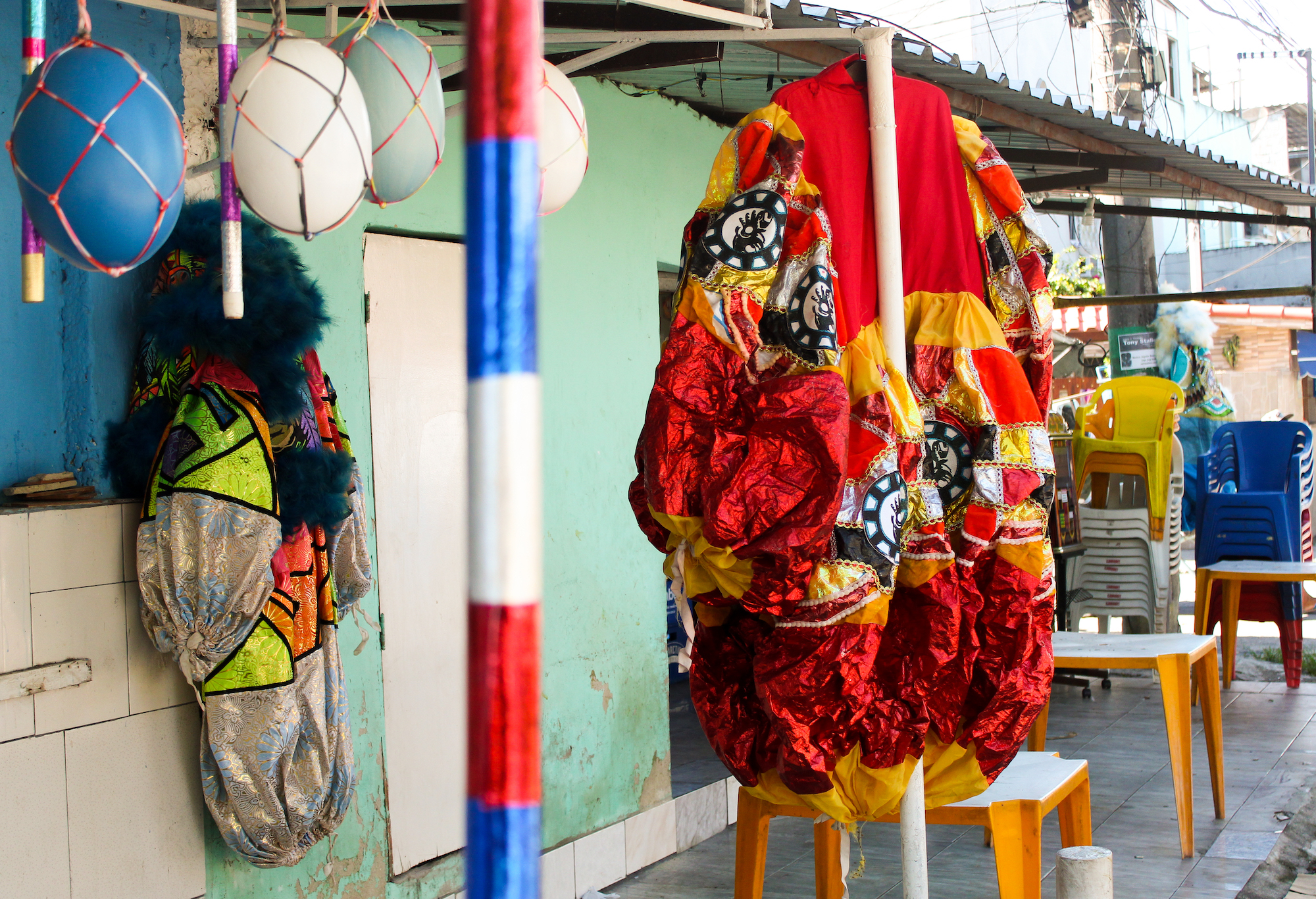 Recognized as an expression of Rio’s cultural heritage in 2012 by the City of Rio de Janeiro, bate-bola clowns “are typical characters in Rio’s carnival that reflect the happy and irreverent way in which the suburban population celebrates and their capacity for producing work that is both traditional and innovative at the same time.”

Against this backdrop, beginning in his childhood, Anderson Luiz—also known as “Playboy”—fell in love with the costumes and sound of balls hitting the ground. Different from his peers, who fled from the colorful “monsters” roaming the alleys of City of God, in Rio’s West Zone, he became enamored with bate-bola clowns and dreamed of forming his own group.

Now, at 40 years old—but still a boy who just wants to celebrate Carnaval—Anderson celebrates over twenty years of taking to the streets with the most complex designs, colors, and fabrics in recent memory after participating in historic bate-bola groups in the community. 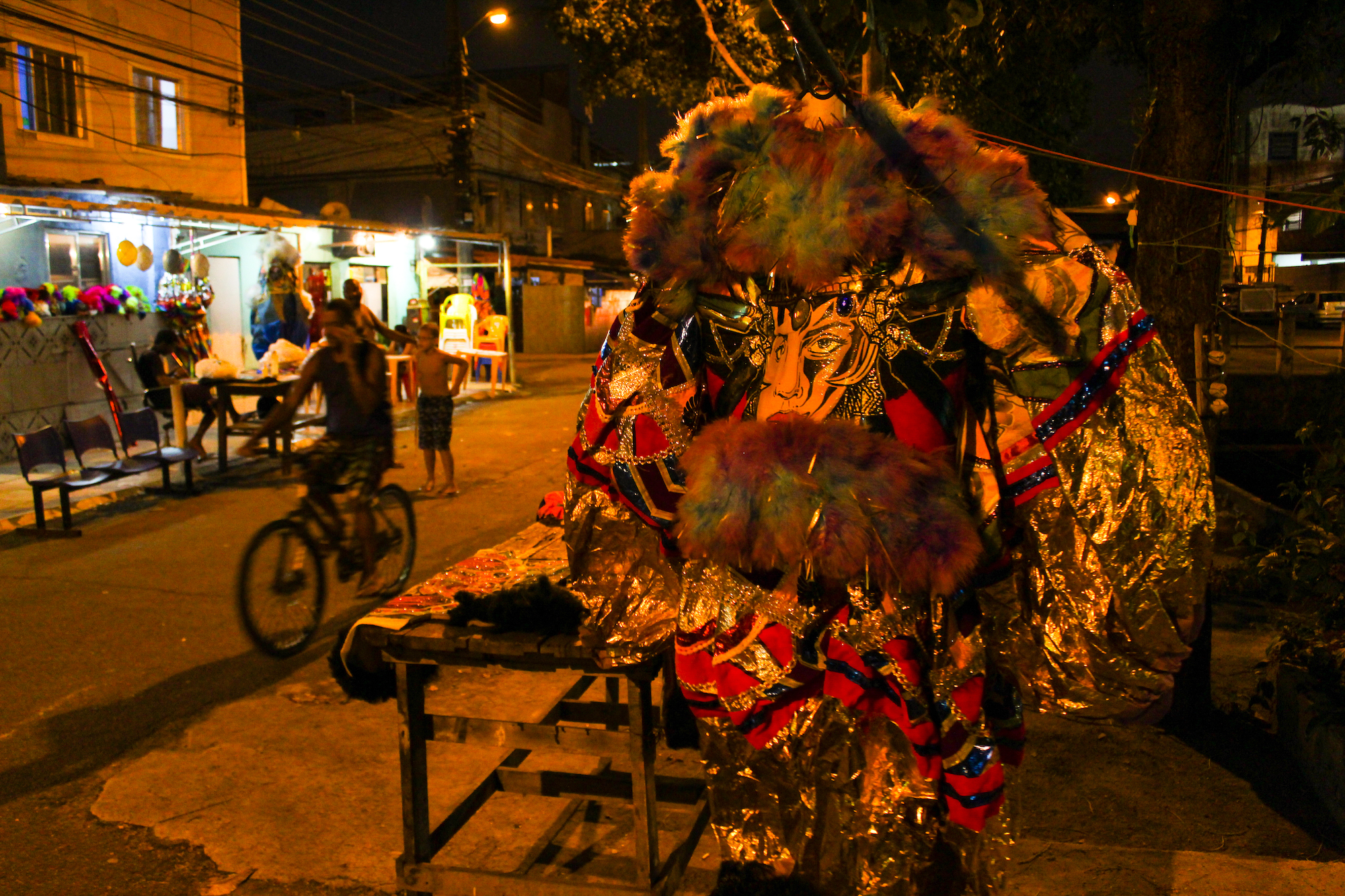 As he dreamed of long ago, he now proudly designs, cuts, glues, and sews each costume for the group “City of God Badalados and Badaladas,” of which he is also the founder and leader. This carnival, the group celebrates its three-year anniversary. 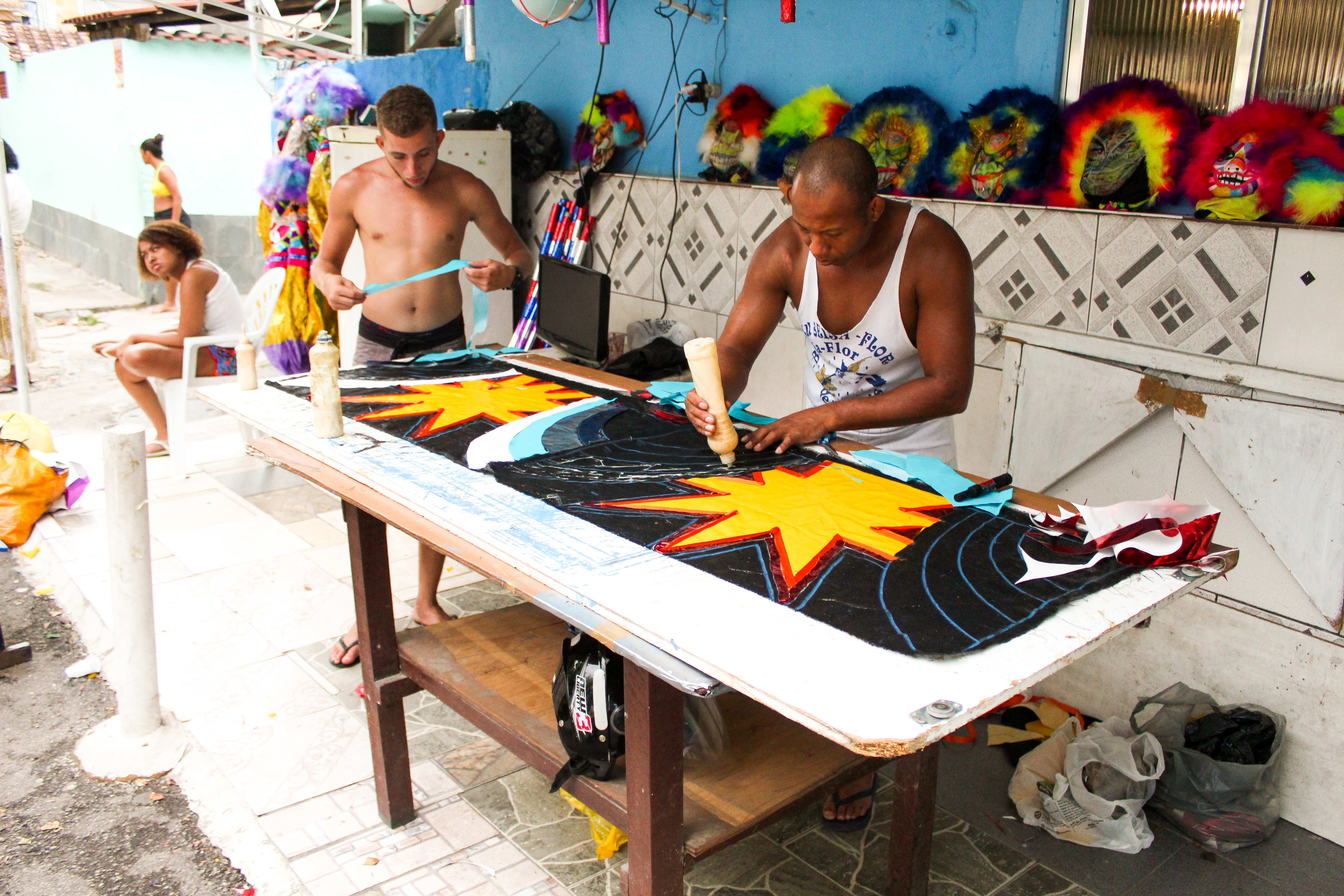 Still with very little infrastructure, working out of a kiosk, Playboy transforms the alley of Rua Monte Sião, located at the corner of Bar da Índia in an area known as AP2 in City of God. The work is done under the gaze of the curious and the young, who dream, as he did, of one day having their own group. On the street, he mounts the coats, sticks, balls, and props with a smile on his face, coordinating a crew composed of seventeen women, fifteen men, and five children—all of whom were born and raised in City of God.

However, don’t assume that the entire costume is assembled in public. After all, part of the excitement of the parade of bate-bola clowns—a day filled with fireworks, funk music, and a gathering of all group members—is the surprise! This is when the public discovers the materials, coat designs, and masks used each year. 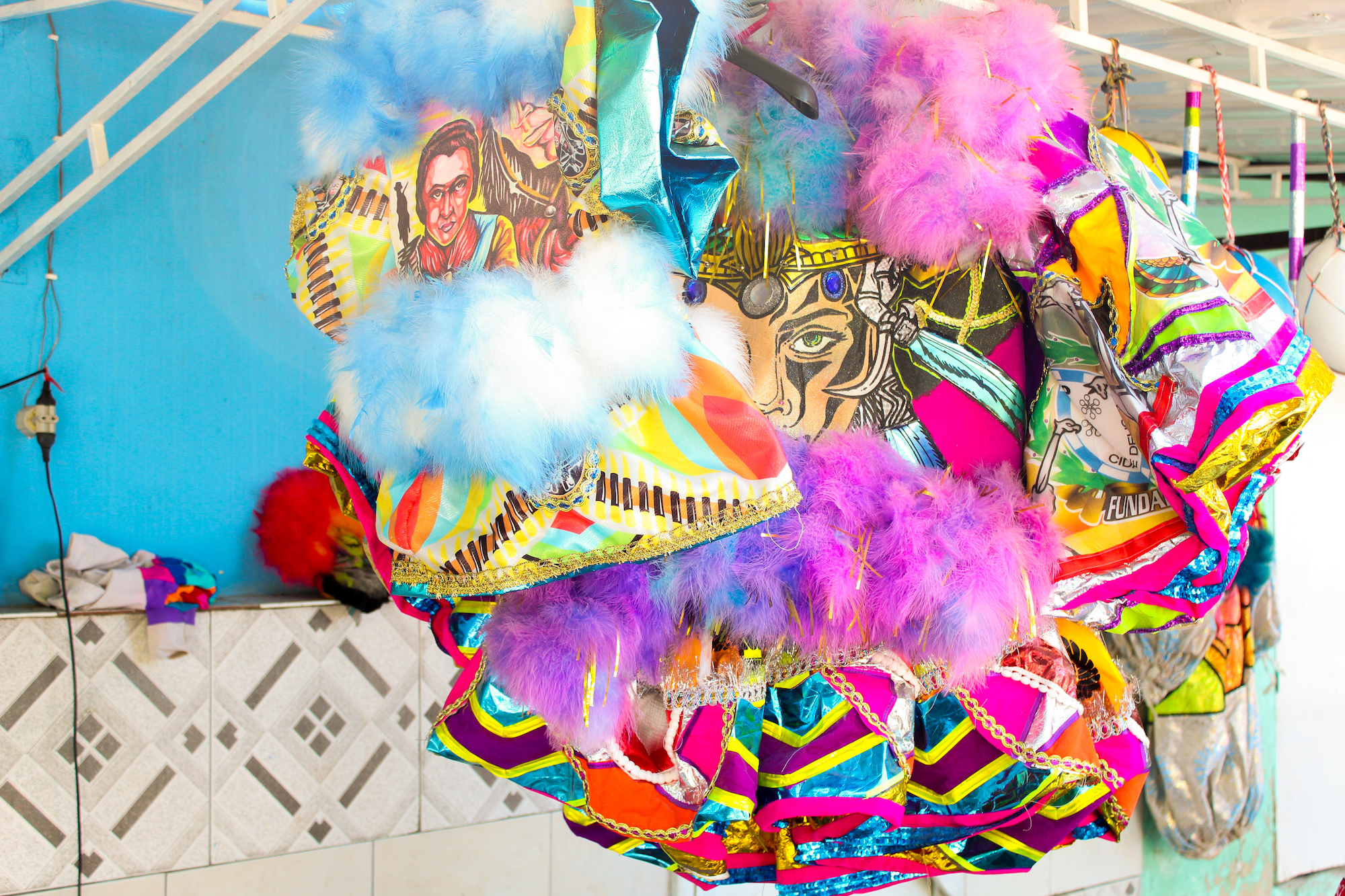 The props are considered fundamental—they are closely guarded secrets hidden in different places, prohibited from being photographed and shared, and are only seen by members of the team. “It’s like a birthday surprise. You ask for a video game as a gift. In the old days, that’s what the kids asked for, right? But your father doesn’t have the money and tells you that he cannot give you a video game. But he tries everything that he can up to your birthday. And when he is finally able, he leaves the gift by your bedside while you sleep. This is our gift to the audience that follows our work,” explains Playboy.

The preparation, which begins again at the end of each Carnaval, lasts the entire year—from the conception of the idea (the moment in which members are consulted about draft designs) to the search for materials and financial planning, to the creation of every last multicolored feather.

Their preparation and dedication are impressive. But time is short for people like Anderson who don’t make a living off of carnival alone. Therefore, also working as a jiu-jitsu instructor, personal trainer, security guard, and gas station attendant, the preparations almost always take place at night and in the early hours of the morning.

So that the plan does not go awry, the preparations are planned and carried out under the guidance of Hélio Alexandre, known as “Gym.” Also enamored by Carnaval, he is one of the biggest supporters of his nephew Playboy’s work. Raised in City of God, Gym, 45, celebrates approximately 25 years of his love for bate-bola. He shares: “Since I was a kid, I wanted to participate [in bate-bola] but I didn’t have the money. I kept searching. When I was finally able to invest in my costume, I worked hard for it and never stopped. Now, we ensure that children participate. And everyone else too. If you cannot pay, we will find a way to make it work.”

Sharing a craft and a dream, they work through the night without glancing at the clock, committed and devoted to what they believe in. They are ordinary, hardworking men who see in carnival and in fantasy (it’s nothing simple, purely art!) the potential to strengthen ties, and to fill the favela’s streets—if only for a few days—with happiness, imagination, and life rather than violence. 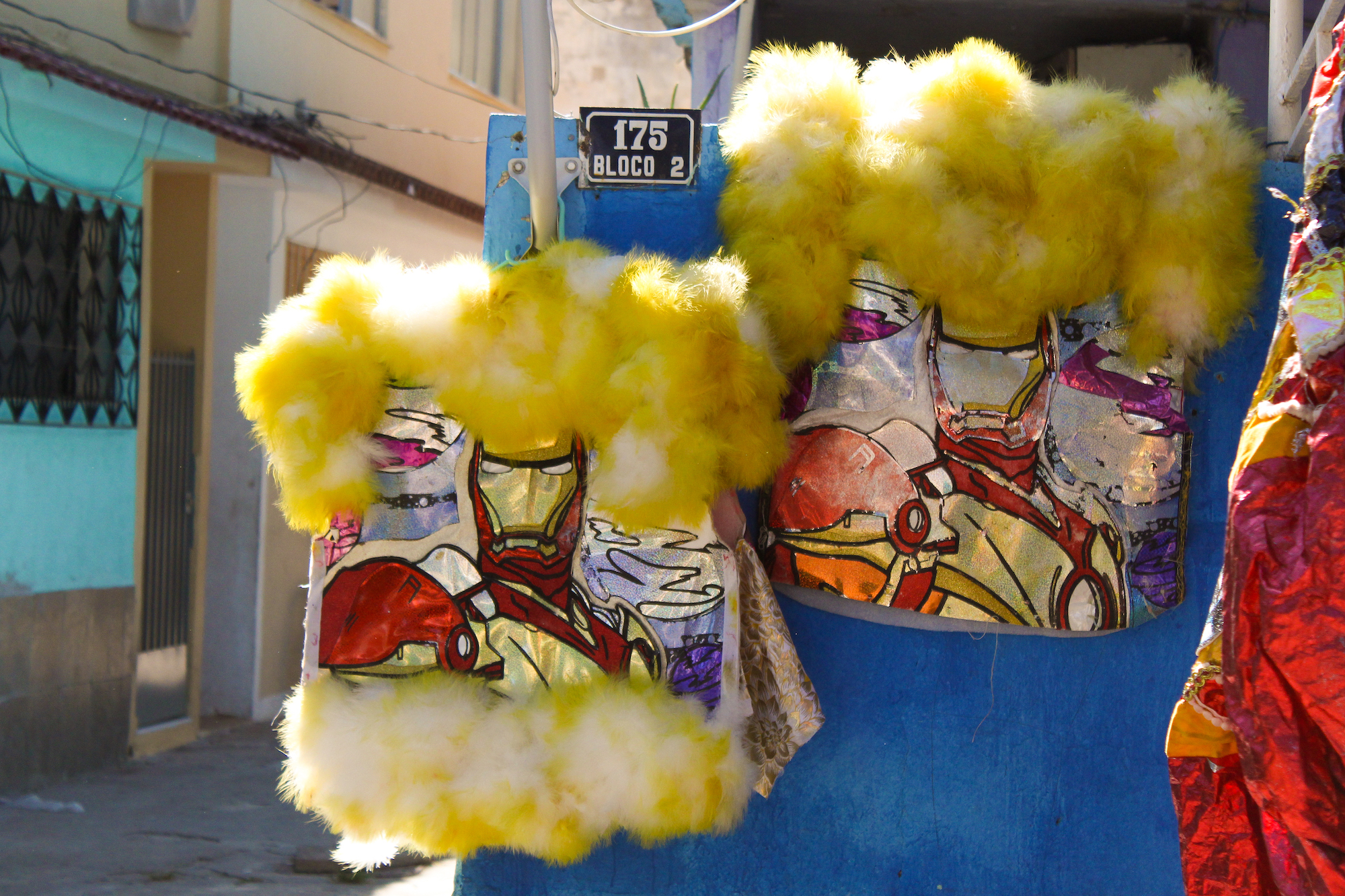