For the original article in Portuguese by Gizele Martins* published by Brasil de Fato click here.

Favelas and peripheries are authorities’ areas of choice for police to experiment with weapons and training methods.

The politics of criminalization and militarization in Brazil are increasing. In recent years, Rio de Janeiro became, without doubt, a large laboratory for policies of lethal force, control, and incarceration. We also know that favelas and peripheries are authorities’ areas of choice for police to experiment with their weapons, methods of control, censorship, and military devices such as drones, helicopters, and armored vehicles, etc.—all of which are deployed through racist policies. 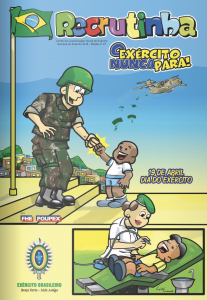 In the last ten years, nearly fifty favelas in Rio de Janeiro have suffered on a daily basis from Pacifying Police Units (UPPs), and some of them from the army as well. In 2014 and 2015—the period when Brazil hosted the World Cup—the favela where I was born and live today, Complexo da Maré (located in Rio’s North Zone), suffered from an army occupation. During this time, we had to live with tanks, with soldiers searching residents and children, invading homes, entering schools and sometimes even replacing the presence of teachers in the classroom—not to mention the distribution of the magazine O Recrutinha (produced by the Brazilian Armed Forces) with designs of tanks for children to draw and build, something that should not have been allowed in a country that calls itself a democracy.

No wonder we have defined Rio de Janeiro as a big laboratory for politics of lethal force and control. Last year it was not only Maré that once again suffered from police operations ordered by the police together with the army, but the entire city of Rio suffered from the federal military intervention. In other words, the “experiments” by authorities, police, and soldiers in Maré (in 2014-2015) were put into practice across the entire city of Rio in the years that followed.

However, we know that the daily lives and mental health of residents of the “asphalt” (the formal city) from the city’s wealthy neighborhoods have not felt the impact of seeing and having to live with tanks, helicopters, armored vehicles, drones, shootings, and terror; residents of favelas and peripheries suffer from all of this. We could even say that on the asphalt, the policies in effect are based on human rights—a public security model that guarantees life—whereas favelas and peripheries are subject to policies of militarization as a form of exerting control over impoverished bodies and communities.

Wilson Witzel, the current governor of Rio, stated in the early days of his administration that “police should shoot [criminals in favelas’] little heads,” making it clear that this form of control—through incarceration, militarization, and criminalization—is done in a deliberate way. It is a top-down approach—a policy that clearly distinguishes between blacks and whites, between favela and the asphalt, between the poor and the rich. It’s always the same bodies that are affected by these policies and subject to “experimentation.”

If we recall statements from previous officials, we will see similar discourse and policies. Sérgio Cabral, the former governor of Rio, declared that “women from favelas are factories for producing criminals.” They look at favelas and peripheries from the top-down and consequently, their governance practices follow the same rhythm—nothing changes.

In Rio’s Favelas, in Palestine, in Haiti

In December 2018, Witzel traveled to Israel in pursuit of drones to increase repression and to shoot at and kill in Rio’s favelas. Unfortunately, it is not surprising that the governor resorts to technologies in Israel, a state that has used the people of Palestine as a laboratory for repressive and murderous technologies and tactics for decades through a brutal and illegal regime of apartheid, colonization, and occupation. All of this is exported as part of a profitable industry. 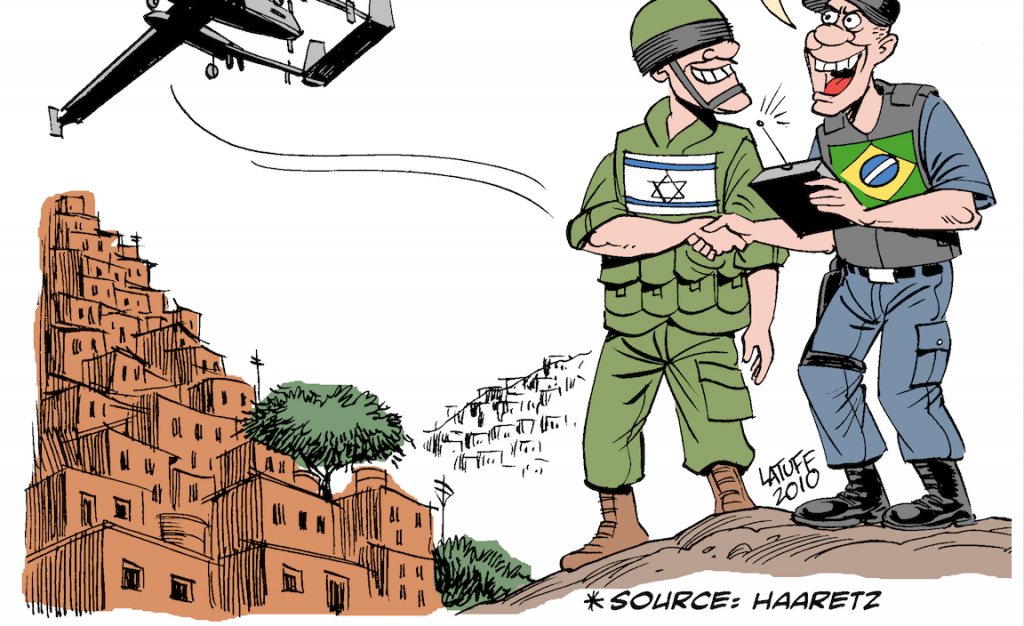 If Brazil is now Israel’s fifth largest buyer of weapons and the Special Police Operations Battalion of the Military Police (BOPE) has already conducted training with Israeli military companies, Brazilian president Jair Bolsonaro’s trip to Israel last month signals even deeper coordination between the two governments. And the international connections do not stop there: last year, for example, three armored vehicles used by the BOPE that were used in the Brazilian operation in Haiti were delivered by the Brazilian Army to Rio’s State Secretary of Security.

From the favelas of Rio de Janeiro to the occupied and besieged Gaza Strip, from Brazilian peripheries to Haiti—militarized by Brazil—the ties between governments and companies that challenge our lives, our dignity, and our rights are growing in an alarming way. We have no choice but to internationalize our resistance against globalized militarization and racism.

*Gizele Martins is a resident of Maré. She is a journalist (PUC–Rio), has a Master’s degree in Communications, Education, and Culture in Urban Peripheries (FEBF–UERJ), and is a member of the Favelas Movement of Rio de Janeiro.