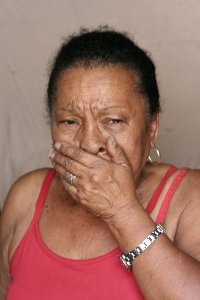 Maria Garcez looked on devastated as City workers demolished her home in Favela do Metrô on November 4th, 2010. Her image accompanied RioOnWatch’s first report on the brutal eviction of the community to reportedly build a parking lot for the World Cup 2014 at the nearby Maracanã stadium, though to this day no official project for the site has been released.

Two years later we met up with Dona Maria, 65, at the apartment she shares with her granddaughter in Minha Casa, Minha Vida replacement housing in the distant West Zone neighborhood of Cosmos. With expressive outbursts in her thick Northeast accent, Dona Maria, who has lived in Rio since February 1963 but was originally from São Luiz, Maranhão, talks about her experience.

Where did you live when you first came to Rio?

First I lived in Bonsucesso then I was relocated to Santa Cruz on Avenida Antarres, but I left because of the transport. I worked at the time. Now I don’t, now I’m retired. So I gave up my house there and went to live in a shack on the Pedreira hill in Acarí. Since there was a lot of violence and crime, I left and rented somewhere. From there I went to the piece of land on São Francisco Xavier [in Favela do Metrô] from which I was removed to come here. I built my shack there, with little strength and without help from anyone else.

By the time you were evicted what was your house like?

I lived thirty meters after the viaduct. It was a favela with rats, blocked drains, full of venomous centipedes, but I liked it there. I don’t know how to explain it. I liked being there, close to the center and resources. 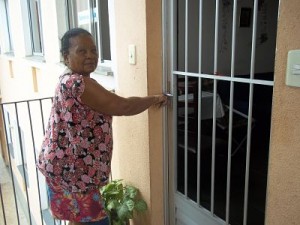 I felt violated. I was nervous and disoriented when they arrived. I dragged everything out before it was all buried. I had materials I had purchased to construct a lage [roof terrace], but I was unfortunate, it all became debris.

How was the move to Cosmos?

It was very bad and very difficult because I’d lived there [in Favela do Metrô] for 24, almost 25 years. It’s difficult even today because here we don’t have any support.

What are the difficulties in living here? 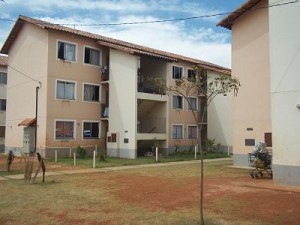 Here we only have the family clinic. It’s filled with people who have been relocated from there to here. There’s a boy who’s been trying to get an appointment for a month and still hasn’t managed. There’s the Rocha Faria [hospital in neighboring Campo Grande] that’s always busy. I’ve still not been. There’s the UPA [Emergency Care Unit] where some attend well, others no.

Things like a supermarket, market, grocery stores, we have but they’re a bit far away. Before we were relocated we had all this too, but it was all nearer.

Transport is terrible here. We don’t have a direct bus to the city. There’s just one air-conditioned bus for R$8. There’s the train that you ride like a sardine in a tin. It’s a disgrace, a public calamity, to get to the center of the city. This week I’m going to a hospital there and I’ll have to stay over at someone’s house in Tijuca to be able to leave at 4am and get a number [in the queue]. I’ll leave here Thursday, get a train to Central and then a bus to Tijuca and sleep there. Here we don’t have anything.

The problem is the transport and health services. The rest is ok. We have water and electricity and so on.

I like my house very much because really I lived in a shack and on the minimum salary pension I receive, I didn’t and don’t have the resources to get an apartment like this. I like my house here. But I don’t like the location. If I could, I’d have already sold this apartment and moved into a favela down there [in the city]. There we have Souza Aguiar, Salgado Filho, Andaraí, Barata Ribeiro [hospitals]. Transport is easier. There’s proximity to the center of the city.

There are people relocated from several different communities living in this condominium. How are relations?

I don’t have much contact. Just ‘good morning’ and ‘good afternoon’ with some people. There’s no communication or intimacy. I don’t complain because I stay inside my house. No one bothers me and I bother no one. For me it’s OK.

If you could go back to Favela do Metrô or housing in Mangueira would you?

[Thinks about it] No. Even though I don’t like it here, I wouldn’t go no. I’ve been here for two years now. I’m starting to adapt. I don’t die of love for the place. I like my house, as I explained, but it still isn’t mine because it isn’t written down. The mayor put us here so as long as they don’t remove me I can say it’s mine. I’m here now.