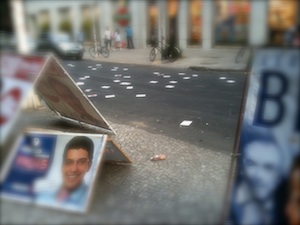 The ads for “vereadores” (city councilors) for Rio’s “Camâra” (City Council) litter the streets of Rio during the campaign season, with this year’s ballot boasting more candidates than even the most politically informed voter could possibly keep track of. There are 51 seats on City Council simultaneously up for election every four years. There are no term limits, so conceivably ‘councilor’ could constitute a life-long occupation. Common across Brazilian politics, a diverse range of parties are present in the City Council. There are 20 parties currently represented, with the plurality being held by the Brazilian Democratic Movement Part (PMDB), which holds 12 seats. This election has 1,741 candidates, and in this massive metropolis, there are no districts for city councilors. Each voter is to vote for only one candidate for City Council. With 1,741 candidates vying for all 51 seats, opportunities for corrupt clientelistic practices emerge from this somewhat “free-for-all” system.

Rio is home to over 6 million people and covers over 1200km2. Its City Council has a notorious history of corruption, some of whom are members of vigilante militias that hold control and terrorize certain communities throughout the city. These criminals are able to slip through the cracks and into City Council by zoning in on one, usually low-income, area using questionable campaign methods, like bribing and manipulation. “Electioneering,” private or public policy actions taken solely to sway the vote, are also widespread. Therefore, criminal interests are not only represented on the City Council, they may well be over-represented within the municipal government. 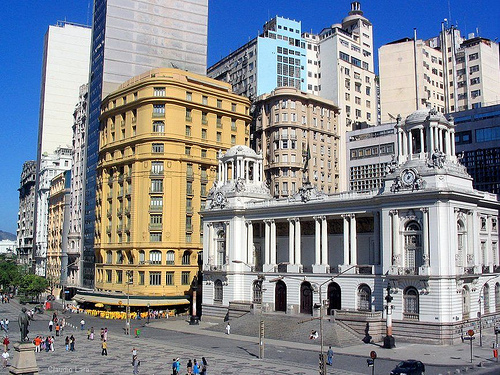 A complicator for understanding City Council is the use of a Proportional System to count votes and determine who wins Council seats. Rather than simply selecting the 51 candidates who received the most votes, the number of seats on City Council that will be held by one individual party is proportional to the number of votes that the party’s candidates on the whole received. Usually a party will have several candidates running for City Council. The number of votes for each candidate from the same party is added together and seats are allocated proportionally according to those numbers. Then, in order to determine which candidates will actually occupy the spot on City Council the highest vote getters from the party occupy those seats allocated to their party.

In order to better understand the inner workings of City Council–its strengths, weaknesses, powers and influence–we interviewed Jorge Borges, geographer and technical advisor to  city councilor Eliomar Coelho, of the Party of Liberty and Socialism (PSOL).

What are some of the most important duties of a city councilor?

What is the most important power a city councilor holds?

In our opinion, the most important power of a city councilor is the council’s checks on the executive power. Through our research and investigative actions, we have contributed decisively to the resistance against some current projects underway in the city.

What is the relationship / difference between a city councilor’s power and a Mayor’s power?

The mayor holds the Executive Power and holds the power to directly enforce public policy, define operational standards for services and works, and also be in charge of public spending and social programs for the people. The City Council should be a link between the mayor and the people, but in Rio, unfortunately the people who exercise these mandates have other interests. In our mandate, the priority is to fight social struggles plaguing the city, breaking past barriers such as a lack of transparency, qualified participation in the execution of public policy, in the accusation of irregularities and in the support of community organization.

What are ways that power is abused in City Council?

Most city councilors are not interested in the well-being of the general population and adopt a clientelistic and obscure attitude with regard to their political actions. This means that instead of working in the interest of municipal government taking essential services to low-income neighborhoods, they create their own social works (private spaces for social assistance, health care, and in some cases education). These social centers, though private, are actually maintained with municipal resources and professionals, but advertise the name of the city councilor who created and maintains it. This practice has created the infamous “corral of electorates” – territories dominated city councilors who achieve control of the electorate in a certain area, many times through violent acts or fear tactics (eg. If the councilor is not elected, the community will lose all its public services).

Obscurantism in the legislative process is revealed when bills are brought to a vote in the City Council and bills that are harmful to the population are approved by a large majority of city councilors, with little debate and a debate totally unrelated to social concerns. This happens particularly with urban planning-related policy, which is one of the principal constitutional duties of the municipalities. The projects of interest to real estate tycoons or transportation cartels go through quick and easy procedures, ignoring the opposition and strong position of the few seats that do not have ties with these interests. In all these cases, the connivance of the mayor is demonstrated clearly, for the executive power maintains social centers as a way to secure political support for their actions and also participates in the legislative process, sanctioning the laws approved by the City Council.

What are some negatives of the City Council system in Rio? How do you think these things could be improved?

Some may say that the City Council is a dispensable institution in Brazil. Besides consuming an enormous quantity of public resources, the legislative branch of the municipality sometimes seriously lacks political qualification and does not reflect the necessities of the population. Opportunities for public comment, for example, never really consolidated because public opinion does not find echo or support in the Council’s actions, debates or deliberations.

But since this debate about the evolution of representative and participatory democracy doesn’t advance, the principal task in regards to the City Council is the fight for more transparency, for more monitoring on the part of the population. To give you an idea, the simple advent of a TV channel exclusively transmitting City Council actions has significantly altered the relation between the government and the population. It’s important the scope of this TV channel is expanded so it can disseminate more of what is happening behind the closed doors of the City Council.

Despite all these issues, the City Council still is able to find some space for strengthening resistance against authoritarian projects and for the promotion of debate of views in the construction of a more democratic and just city. Our office has more than 20 years of experience in City Council and is always side-by-side with social movements and neighborhood associations when it comes to crucial issues in different neighborhoods and regions in the city. Furthermore, with the possibility of organizing debates and public audiences about key issues, it is possible to organize the population to face the principle challenges in terms of public policy.

How does it affect the city that there is no district representation? Is this good, bad? What should change?

In the elections for City Council, the territorial base of the election is the municipality as a whole. And according to Brazilian legislation, every municipality is a city. Formally elections for representatives of neighborhoods or internal regions of a city do not exist. But in practice the majority of candidates self-proclaim as representatives of specific neighborhoods, communities and regions where they have located their social centers and clientelistic headquarters. Very few city councilors present themselves as representatives of the population and act throughout the city.

At first glance, linking the actions of a city councilor with a given territory wouldn’t have been a bad thing. What is bad is that this alleged representation generally comes with the practices described here: clientelism and obscurantism in the legislative process. The debate about district voting in Brazil is generally defended by this segment of the political class, because for these parties and groups, that control the machine of government resources, it would be much easier to use clientelistic structures to dominate the districts further away and ever-enlarge their majorities. With all the problems and limitations, the Brazilian electoral legislation for the legislative power still follows the proportion between the different parties that permit the same small parties and resistance groups (that generally don’t get a lot of votes) to get seats in parliament. The district vote, in Brazil, with the current political structure that we have, would be the end of minorities in institutional politics.

Anything else you think someone trying to understand Rio’s City Council should know?

The principal debate about the legislative power today is its transparency. There is much talk about how the legislative houses cost taxpayers without providing information on how they are fulfilling their responsibilities. But still very few know or explore the responsibilities of city councilors. Recent initiatives we have seen, to try to evaluate councilors’ legislative initiatives through quantitative indicators or imputing them in qualitative analysis with questionable criteria has led to a depoliticization of the debate, and consequently, a reduction of criticism of City Councils.

If we can increase the transparency and the level of awareness of the population about the functions and responsibilities of city councilors and of the real capacity of the job, we will achieve an important step in the requalification of this sphere and strengthen participatory democracy in Brazil.