Rio de Janeiro housing rights activists have come together this February and March in a cycle of conferences to commemorate the 30th anniversary of the Land and Housing Nucleus (NUTH), of the State’s Public Defender’s Office. The conferences’ objectives are twofold: they present an opportunity to share experiences on the NUTH’s work, drawing lessons from the body’s history, while also providing an opportunity to collectively rethink the NUTH’s functioning and governance to better face contemporary challenges.

The lectures and discussion groups have brought together various actors: favela residents, community leaders and representatives of partner movements and organizations, academics, researchers, as well as NUTH defenders, servants, technical staff, and trainees. 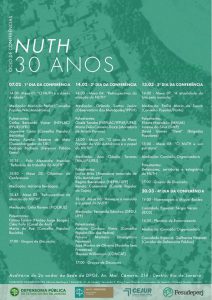 The constitutionally-mandated Brazilian Public Defender’s Office exists at federal and state levels and can be solicited by citizens directly, providing free legal aid to the less fortunate. It plays a proactive role in the promotion of human rights. In these ways it is the only body of its kind in the world. In fact, the Constitution guarantees its existence and autonomy as a fourth source of representative power in addition to the legislature, executive and judiciary branches, and in equal footing with the Public Prosecutor’s Office.

Rio de Janeiro’s NUTH is even more singular, as its work focuses specifically on defending the right to housing, a constitutional right in Brazil. According to Adriana Beviláqua, a NUTH public defender, defenders concentrate their efforts on defending housing rights in the context of urban land conflicts. They deal with, therefore, many cases threatening forced eviction by public authorities, of possession conflicts with private actors, as well as questions of land regularization, covering approximately 500 communities in the municipality of Rio de Janeiro. In recent years, NUTH has represented numerous cases where residents’ right to housing was not respected, as in the case of the City’s preparation for mega-events such as the World Cup and Olympic Games.

Rio de Janeiro was the first Brazilian State to establish a Public Defender’s Office, and it remains home to one of the most developed in the country, even if the promise of universal access to justice is not always fulfilled. Speaking at the conference’s first event on February 7, Luiz Severino of the Catholic Church’s Favelas Pastoral Committee and the Popular Council, a support and advocacy group of favela residents and supporters fighting eviction from across the city, called the NUTH essential “in a city of exclusion and struggle… a champion in [cases of] human rights violations.” Vila Autódromo resident and housing activist Maria da Penha Macena agreed with Severino on the group’s role in a threatening political context, saying that, at the moment, “it is difficult to have the right of the poor, the worker, the favela resident, the black, the indigenous, respected.” For Giselle Tanaka of the Urban and Regional Research and Planning Institute at the Federal University of Rio de Janeiro (IPPUR-UFRJ), the NUTH is an essential tool for resisting “attempts to deny the rights of residents, including illegal actions by criminal public authorities.”

The conference cycle has provided an opportunity to share experiences, leverage the takeaways of the previous years’ struggles, and reflect introspectively so as not to repeat the mistakes of the past. The conference opened with participants recognizing the body’s work: speaking on February 7, Macena lauded the NUTH’s support, saying: “It is meticulous work. It’s very hard, but we actually achieved some victories, partly thanks to NUTH’s help.” Orlando Santos Junior of the Metropolis Observatory and IPPUR-UFRJ called the NUTH “a great societal achievement,” and General Public Defender Rodrigo Pacheco emphasized the importance of building a line of action with cooperation and participation, as did former Public Defender Alexandre Mendes, who noted that “the NUTH was built openly with effective participation, not invented, and the quality of its action depends on this participation and autonomy.” Regina Bienenstein of the Center for Housing and Urban Studies and Projects of the Federal Fluminense University (NEPHU-UFF) insisted on this point, speaking February 14, saying: “the professional body of the NUTH defends the rights of the residents regardless of what orders the powers are sending from above.” 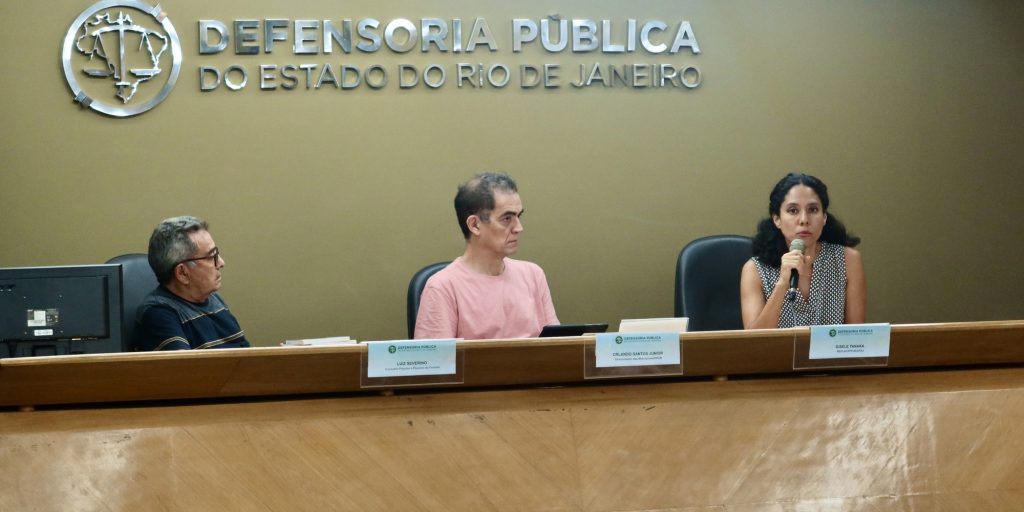 Strengthening the Relationship Between NUTH and Favelas

Favela residents, many of whom had gathered at the conferences from the mega-event threatened West Zone communities of Vila Autódromo, Canal do Anil, Rio das Pedras, Barrinha, and Arroio Pavuna, stressed the importance of forging and maintaining a solid relationship between NUTH and communities and the need to strengthen the local presence of defenders. “It is essential for defenders to have a dialogue with communities, because only then will they discover the needs of that place,” said Macena. “It makes a huge difference when a public defender is committed, present, and holds meetings to explain to us that we have a right to this land because we in the communities often don’t have time to get to know our rights.” Jacqueline Costa, a resident of the favela of Barrinha and a member of the Popular Council, added that, “before, the defenders did not come to the communities much, now they are much more present, they come to know better and to see with their own eyes the problems we face.”

Costa also noted, however, that the residents could help the NUTH even more by participating and helping to organize meetings. Indeed, for Tanaka, historically, the most successful resistance movements have been those initiated and led by community residents themselves, supported with tools from the NUTH. Maria Zélia Carneiro Dazzi from the resident’s association of Vila Arroio Pavuna stood as a testament to this, said Tanaka: “she is the one who went ahead, who settled the meetings with the different bodies and who sought the support of NUTH’s resources to show her right to stay.” To achieve victories, “the work must be integrated into everyday life, it must have a permanent dialogue,” said Bienenstein. Such was the case in Vila Autódromo, where the community was able to bring together several groups and build a strong network. Thus, the NUTH has to maintain the exchanges with the leaders of each community, and with organizations such as the Popular Council and Pastoral das Favelas. 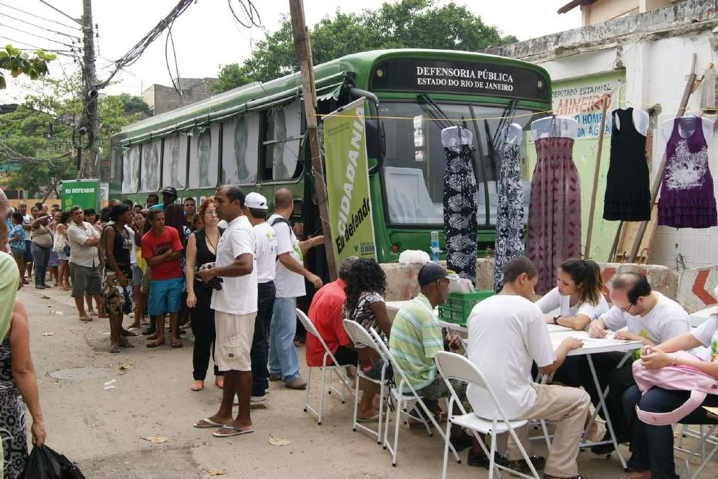 The Aggregating Role of the NUTH: Technical Support and an Open Door to the Political Sphere

According to Tanaka, the strength and power of NUTH comes from its aggregating role: it gives communities the opportunity to work with legal and technical allies (e.g. engineers, geographers, photographers) who are needed to create a solid and legitimate foundation to defend cases. The NUTH is also a key stakeholder in political advocacy: “it is necessary to know your rights to be able to fight, but it is not enough in front of a State that is acting illegally,” says Tanaka. “Sometimes a document or a title deed can be worth very little against politicians and administrators who, instead of guaranteeing public interest, are against the people and the recognition of their rights because of social prejudice and greater interests. So, it is important to have actions of opposition, of contestation. The NUTH manages to open channels of discussion and negotiation for communities with the public authorities, it allows them to enter the political sphere, and also helps to legitimize their voices.”

The conferences’ talks also provided space to discuss less flattering episodes in the NUTH’s history. It was an opportunity to recall mistakes made, including the negative effects of political influence. Several leaders evoked challenges that had arisen and been overcome with the NUTH, including Public Defenders “who were not in line,” according to Fátima Tardim, an architect and urban planning specialist. For Inalva Brito, a former resident of Vila Autódromo removed during the favela’s eviction process, “there was a defender who denied us entry to the Office… Many people in the community looked at the defenders as people they could not approach, because they dressed and spoke differently. This distance was very important for us. Now the defenders go to the communities and dialogue, they are like us.” Bienenstein also remarked that, at one point, “a few defenders were lobbying to convince residents to accept the city government‘s proposals: this should not be the role of NUTH!” Many of the discussion group debates focused on issues of governance within the independent public body and on the question of the nomination of defenders.

Other reflections focused on the internal limitations of the NUTH. Tanaka observed that “this place also ends up being a place of power. Most of the technical advisors are college graduates, mostly white, mostly middle class, if not upper class… But it is important to keep in mind the greater political struggle. A lawsuit alone will not change this unequal political scenario in terms of power.” Poliana Monteiro, author of research on the relationship between gender-based violence and forced evictions, raised the issue of gender representation, recalling that the right to the city remains unequal, and that the question of what it means to be a woman in the city should be taken into account in the organ’s decision-making.

Event participants also indicated that a lack of economic and human resources at the NUTH may be preventing the body from fulfilling its mission. Some favela residents noted that the NUTH is often overworked, while others called for the NUTH’s work to be extended to other municipalities in the state.

These and other issues are at the center of debates that took place at the end of each conference day, where all participants were invited to propose ideas to strengthen the NUTH in the fight for the right to housing. The conference’s final two events, postponed over Coronavirus concerns, will allow participants to deepen their ideas for improving the NUTH, culminating in group proposal presentations at the conference’s closing.