For the original article by Ciro Barros in Portuguese published in Pública click here. 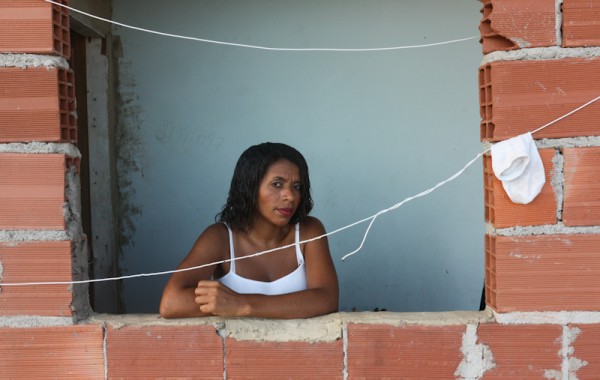 “They don’t destroy just the house. They destroy that person’s entire life, their plans, and projects,” states Elisângela Sena, 38, who has experienced the drama caused by Rio de Janeiro’s planning of future mega-events. Resident of Pavão-Pavãozinho, located in the South Zone between the wealthy neighborhoods of Copacabana and Ipanema, Elisângela witnessed her house literally fall to the ground in 2010. Two years later her story became a documentary, and she is still waiting for a new house, indemnities, follow-up from an aide of the Municipal Housing Secretary, and a phone call from her boyfriend who has not returned after he left the country to study law.

Here we publish an interview with Elisângela to understand what happened after her house was torn down [see original video documentary about her case below].

What happened in your life after the demolition of your house?

It was something that shook me. Firstly, we all lived together, my boyfriend, my daughter, and myself. We were going to get married but we had to cancel. He had to leave Rio to work elsewhere, so that he could earn more money, and then he left the country. My daughter went to live with my mother until we figured out another place to live. She missed six months of school because everything was a mess. She had to come from Méier to study close to the community, and as a result, she missed an entire semester. In addition to losing my job at this time, I also had to stop attending my university course on Tourism and Hotel Management. Right now, we are just trying to reorganize our lives. I was at least able to rent a new house. Unfortunately it is right next to the old house that was torn down, and my daughter is too traumatized to stay. It is horrible to see the ruins of your house all the time. To wake up in the morning and see the ruins laying there is not an easy thing. I don’t even like to stay there looking at it, so much so that I was able to get a job working in a hostel in the favela [of Pavão-Pavãozinho] where I am able to stay the night. For me, it is very disturbing to see the house still in ruins after two years. However, it did motivate me to volunteer to work with people from various communities like Pavão-Pavãozinho, Rocinha, Chapéu Mangueira and Ladeira dos Tabajaras, that are going through the same situation.

Let’s go through the different parts. How was it for you to delay your plans to marry?

To begin with, I just want to say that he (the boyfriend) helped me tremendously with the construction of the house that was later destroyed. When we first bought the house, it was made completely of wood. Afterwards, we changed the entire structure from wood to brick, and he was there working throughout the whole process. We completely invested ourselves and our time in the project. We paid to have the material sent up to the top of the favela, which is much more expensive. Finally, when everything was organized and we were settling in, changing jobs, starting university, getting ready to marry this whole disaster began.

We haven’t seen each other for a year and a half. He decided to study law, as a result of everything we went through, and was given a grant to study in Switzerland. I don’t even know if we are going to continue our relationship, it is very sad for me. Anyway, the Public Defender’s Office has registered me with City Hall to receive a new house that will belong to him as well. I am still waiting for the compensation for the old house.

Was your daughter able to finish school?

She is 18 years old, and in her second year of high school. She missed six months of school, which caused her to fall behind a year.  I would like her to get her GED in order to finish soon so she can begin culinary school. I have a lot of hope for her plans, and I will do my best to help her realize them.

Where does the court’s action stand after you filed with the Public Defender’s Office?

The last time I went to see the Public Defender, I was notified that the process had been at a standstill for the past five months. So I asked the Defender to request the liberation of the case, because the clause that must be judged refers to the compensation of moral and material damages. My personal belongings, which were left in the middle of the street, were stolen and we are still waiting for the compensation. The fact that our name has been included on the list of people who will be relocated within the community is a step forward. However, of the four buildings being built within the community, one of which is already finished, we still do not know which one we will be moving into.

I was able to speak with him, but his aide would never give me correct information. He would always say, “Come back next week,” “I will give you a phone call,” or “We are looking into it.” To this day, two years later, he has never called me. From there, I moved the case to the Public Defender’s Office and stopped going to City Hall. They were of no use.

You ran for councilwoman in this last election. Did the events surrounding the demolition of your house motivate you?

In the first two years, it did not motivate me at all. Firstly, because I was full of anger; I hated politics and was very revolted by it all. I became motivated only after I began to see how the politicians benefit from our hate. We don’t inform ourselves, nor do we demand anything from them. We also don’t learn about politics in our schools. So we live with this hate and refuse to enter that world, and as a result we can’t change the situations in our communities, neighborhoods, cities, or country.  It is a terrible thing, especially for the poorest of the poor. As I was already involved in this fight, I decided to try to enter public life and help other people.

Which party did you run for?

I ran from the PDT [Democratic Labor Party]. It’s a party that is not connected with any other party, but in these elections it gave its support to PMDB [Mayor Eduardo Paes’s party] in exchange for materials and advertising.

How did you feel being a candidate for a party that supported Eduardo Paes, who was mayor when your house was destroyed?

It was very difficult for me. I affiliated myself with the party because of Brizola. I did my research and saw that Brizola had done good things for the communities that are still in effect today. From the beginning they were not part of a coalition, nor had they given their support to anyone. I thought it was perfect, it was what I was interested in. I participated in just one party meeting to present my candidacy. Moreover, I was called to be a candidate one month before the elections, because the Ficha Limpa anti-corruption law had banned some of the other candidates from running. I don’t know about their controversies, who they were with, or what they do, and they don’t know me. I was campaigning in the communities when the people from the party called me to pose for pictures for the campaign. When I learned that I would have to pose for a picture with the mayor I almost died. I said, “I will not take a picture with this man. If you are going to take the picture, it will be of me strangling him. He destroyed my house.” They didn’t even know about my story. They became scared of me. They told me I would have to have some sort of propaganda with his face on it, or I would have to pay for all my own material. I decided to pay for all my own material. I was able to get 50,000 pamphlets and became an alternate.