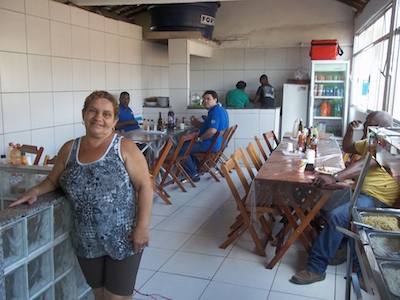 In the bright expansive upper level dining area of her Providência restaurant, Pensão Sabor de Ana, Ana Maria dos Santos, 50, explains the mixed fortunes of her business since the community, which celebrates 115 years this month, received the Pacifying Police Unit (UPP) and public-private works started in 2010.

Originally from the Northeastern state of Pernambuco, Ana Maria came to live with her mother in Providência, Rio de Janeiro aged 15. She describes how she had many different jobs including bank teller, maid and elderly care assistant but in middle age it became more difficult to find work so she started selling takeaway meals and sweets from her home. An active participant of community projects, Ana Maria did administration and entrepreneurship courses offered after pacification in April 2010 and took the steps to formalize her business. “Formalizing meant I had the vision that if I wanted to grow and have my own business,” she says, “I had to legalize and have documentation.”

Following pacification, public works started arriving in the community. Located in the heart of the city in Rio’s port region, Providência is undergoing major works as part of the public-private Olympic regeneration project Porto Maravilha. The works include a gondola with stops by the City of Samba carnival warehouses in Gamboa, the former square used for social and cultural events in Providência and major transport hub Central do Brasil.

Having legalised her business, Ana Maria secured a catering contract supplying up to 600 meals per day to Hécio Gomes Engenharia, the company contracted to carry out works in the community. At the request of the company, whose engineers and site managers wished to lunch at her establishment, Ana Maria borrowed R$60,000 to buy and renovate the upstairs space of her rented kitchen, transforming it into a dining area. However in July, halfway through the contact, the consortium organizing the works cancelled the contract with Hécio Gomes, assumed control of the works and brought in an outside catering company to supply meals. Given the debt incurred to expand her business to supply those working in her community, the sudden loss of business has been devastating for Ana Maria:

“It’s made my life very difficult financially… Everything I spent until July, I knew I’d have the return because we had the contact. But it’s the opposite, I’ve got R$60,000 of debt because of the consortium. If HG had continued, I’d have recovered the money already.” 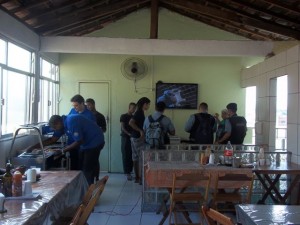 It’s a source of anger and disappointment that the consortium, overseen by municipal government organ CDURP, didn’t look to find a local supplier. Ana Maria says, “They removed the company and never looked to find out if there was anyone in the community qualified to meet their catering requirements. This hurt a lot of people, them not giving credibility to those in the community.”

While it is generally agreed that pacification and the subsequent entrance of institutions and works into the community are improvements on the violent rules of drug traffickers, there is growing concern that the development and works could threaten the survival of local small traders.

Jocelene Ignácio of the State Secretariat for Social Assistence and Human Rights works closely with the community as a mediator between the State, institutions and residents. She identifies formalizing and legalizing as significant challenges for small businesses in the community, as the cost of maintaining a formal business will cripple certain small traders. She also expresses concern that with the gondola and expected influx of tourists through the community, plus the fact that the majority of small businesses are marked for removal, will lead to large companies coming in and pushing out local traders.

“If a big franchise opens, it’s likely that the old senhor in the community will lose his business because he’s not modernized, doesn’t accept credit cards, and buys a small amount so has to sell more expensively,” says Jocelene. “If the public policy isn’t thought out strategically this small business-owner will be expelled.”

Ana Maria, who has ambitions of opening a snack stall by the gondola station, adamantly agrees: “I don’t want to be excluded. They have to give us visibility. It can’t be that a McDonald’s pops up.” 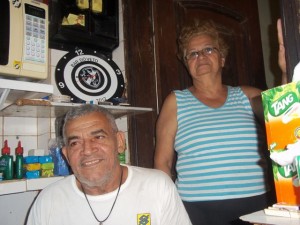 Despite the challenges, entrepreneurs in Providência are looking to the future and how they can benefit from the improvements coming to their community. Working with Jocelene’s team, they’ve set up a Commerce Work Group which meets weekly and represents the start of an interconnected network of Providência’s small businesses that strengthen each other through shared initiatives.

Their first event, supported by the State government and partner institutions, is the first Flavors of the Port Gastronomic and Culture Festival this Saturday November 24th and Sunday November 25th with nineteen bars and restaurants in Morro da Providência and Morro do Pinto offering a special festival dish to be judged at the Festival award ceremony on December 1st, and a further sixty artisan producers and food sellers participating in the festival weekend. Visitors can sample such delights as Ana Maria’s Brazilian fish stew, Rosane Ferreira of Morro do Pinto’s seafood yakissoba and Everton Azevedo Santana’s cod fishballs. Everton, or Seu Veto as he’s known, has had a small bar in Providência for twenty years and is currently in the process of formalizing his business. He hopes the festival brings people to get to know the community, its food and culture: “We’re expecting more people to come and visit. Now people can come and go.”

The Festival Gastronomia e Cultura Sabores do Porto will happen this Saturday 24th and Sunday 25th November, from midday to 9pm. There will be signage and maps of the participating establishments locations available.