For the original article in Portuguese on BBC News Brazil click here. This is our latest article on the new coronavirus as it impacts Rio de Janeiro’s favelas.

A harsh editorial published on Thursday, May 7, by one of the most important scientific journals in the world, The Lancet, highlights the gravity of the coronavirus pandemic in Brazil for its high transmission rate—but, next to the alarming numbers in the country, the text points out that “perhaps the biggest threat to Brazil’s Covid-19 response is its president, Jair Bolsonaro.”

Titled “COVID-19 in Brazil: ‘So what?’” referring to a recent speech by Bolsonaro on the worsening coronavirus situation in Brazil, the editorial states that the statements and attitudes of the Brazilian president and the political turmoil that led to the recent departure of two government ministers, Luiz Henrique Mandetta [Health] and Sergio Moro [Justice], are “a deadly distraction in the middle of a public health emergency.”

The editorial also highlights the vulnerability, especially for the 13 million people living in favelas, those who are unemployed, and the indigenous population of Brazil, to coronavirus. The publication first appeared in an online version, but the editorial is part of the weekly edition published on Saturday [May 9]. 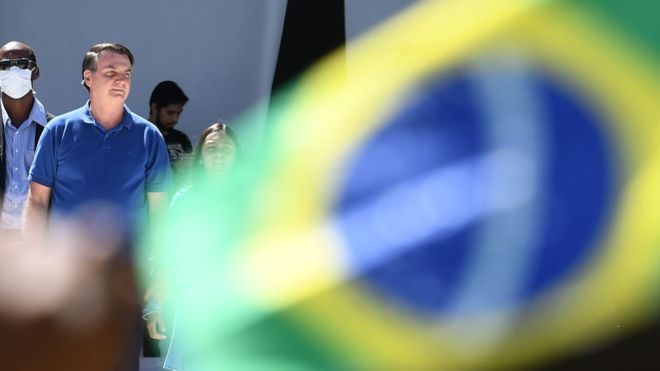 The text begins stating that coronavirus arrived later in Latin America, but that after its first case in February, Brazil came to have the highest number of occurrences and deaths from Covid-19 in the region.

The editorial highlights a worrying and possibly “substantial” underreporting of cases and the fact that Brazil has appeared as the country with the highest transmission rate (2.81) in a recent study from England’s Imperial College involving 48 countries.

“Yet, perhaps the biggest threat to Brazil’s Covid-19 response is its president, Jair Bolsonaro. When asked by journalists last week about the rapidly increasing numbers of Covid-19 cases, he responded: ‘So what? What do you want me to do?'” reads the editorial, recalling a comment by the president at the end of April.

“He [Bolsonaro] not only continues to sow confusion by openly flouting and discouraging the sensible measures of physical distancing and lockdown brought in by state governors and city mayors but has also lost two important and influential ministers in the past three weeks,” states the editorial, referring to the exit of the government’s Health and Justice ministers.

“Such disarray at the heart of the administration is a deadly distraction in the middle of a public health emergency and is also a stark sign that Brazil’s leadership has lost its moral compass, if it ever had one.”

But the editorial affirms that, even if, hypothetically, this “vacuum of political actions at the federal level” did not exist, the country would still have difficulties due to the social fragilities of its population—such as favela residents, with precarious access to water and very dense housing—though the editorial also highlights that “many favelas have organized themselves to implement measures as best as possible.”

“Brazil has a large informal employment sector with many sources of income no longer an option. The indigenous population has been under severe threat even before the Covid-19 outbreak because the government has been ignoring or even encouraging illegal mining and logging in the Amazon rainforest.”

“He needs to drastically change course”

The editorial points out that although the main focal points of the disease are the cities of São Paulo and Rio de Janeiro, “there are signs that infections are moving inland into smaller cities with inadequate provisions of intensive care beds and ventilators.”

On the other hand, The Lancet text exalts the mobilization of civil society representatives, with an open letter led by photographer Sebastião Salgado and published on May 3 calling for the protection of the indigenous; and the actions of the Brazilian Academy of Sciences and the Brazilian Association of Collective Health (ABRASCO) against cuts in funding for science and social assistance under the Bolsonaro government.

“These are hopeful actions. Yet, leadership at the highest level of government is crucial in quickly averting the worst outcome of this pandemic, as is evident from other countries,” closes the editorial.

“Brazil as a country must come together to give a clear answer to the ‘So what?’ by its president. He needs to drastically change course or must be the next to go.”

It is not the first time that The Lancet has published editorials about Brazil, nor about Bolsonaro.

The journal, founded in England in 1823, published a piece in August 2019 entitled “Bolsonaro threatens survival of Brazil’s Indigenous population,” critiquing the threat to guarantees of land ownership to indigenous peoples and access to health.

During Brazil’s 2018 presidential election, an October Lancet editorial presented a brief write-up of health policy proposals from then-candidates Jair Bolsonaro and Fernando Haddad, concluding that “Both candidates’ proposed health policies are based on ideological approaches with little clinical, public health, or evidence-informed input.”

In the 2018 edition of Journal Citation Reports, produced by Clarivate Analytics, The Lancet appeared as the second most impactful publication (per a metric composed of various influence indicators for scientific publications) among 160 journals evaluated in the category of medicine, losing out only to The New England Journal of Medicine.