“Marielle asked, and I ask too: how many more will have to die for this war to end?” This was the rhyme, in Portuguese, chanted by black, favela, and periphery residents marching through Rio de Janeiro on Sunday, June 7, in the second #VidasNegrasImportam (#BlackLivesMatter) protest against racism. The refrain refers to the final tweet of the late City Councillor Marielle Franco, murdered March 14, 2018. The day’s protest, organized by the Favelas na Luta Movement, included participation from periphery and black community collectives.

Under the banner of “Not from Gunshots, Not from Covid, Not from Hunger! Black People Want to Live!”, the demonstrators marched in opposition to the State’s policy of death, both in relation to intensified social vulnerability amid the country’s Covid-triggered economic and public health crisis as well as unceasing police violence in the favelas during the coronavirus pandemic.

Sunday afternoon, when the first demonstrators began gathering at the statue of Zumbi dos Palmares, the length of Presidente Vargas Avenue looked deserted. Almost. “There are more police here than protestors!” yelled one demonstrator, pointing to throngs of police encircling the group.

“The street has always been ours!” yelled Juliana Alves, an activist from Rio’s Popular Union for Socialism. “We are seeing this many police here because there are black people in the streets today. They don’t have the right to take our lives from us, to take our dreams from us, to take those we love from us.”

The ratio would soon invert. Hundreds of black, poor, favela, and periphery youth filled the downtown Centro area’s main avenue, marching despite news of police repression circulating on social media and criticism from dissonant voices questioning the merits of risking Covid-19 infection for an in-person protest in the streets, counter to the recommendations of the World Health Organization.

“I am here because black lives matter, and I am a black youth!” said 23-year-old Adriana Fernandes, a cultural producer and DJ from the South Zone favela of Santo Amaro. “I am part of the risk group, but if we aren’t in the streets, other people will be. Yes, I’m afraid of the pandemic, of getting infected, but we are here today in the streets to fight for our rights.”

They stationed A WAR TANK to protect the Duque de Caxias monument, a genocidal structure that now belongs to the military, but during the empire, repressed so many popular rebellions. Today, we live in a democratic republic. And I ask you: has anything changed for the people of this country?

The police frisked protestors on their way to the march. Rio’s Military Police even published a tweet telling people not to bring hand sanitizer in quantities larger than 50ml.

There exists no municipal or state-level decree restricting the quantity of hand sanitizer one can carry for personal use. Police forces, however, used this as justification to detain protesters on their way out of the protest at Zumbi dos Palmares Square.

Attention!! Do not bring liquid alcohol to protests. Only containers of hand sanitizer under 50 ml will be allowed.

ATTENTION! DO NOT BRING LIQUID ALCOHOL TO THE PROTEST. FOR SECURITY REASONS, ONLY CONTAINERS OF HAND SANITIZER UNDER 50 ML WILL BE ALLOWED.

If the police came ready for war, protestors came prepared to keep the peace. Organizers paced through the crowd, reminding marchers to keep two meters of distance between themselves. A team of black lawyers stood at the frontlines to quell violence and tension, mediating the organization’s relations with police. Throughout the march, organizers reminded the crowd to act as a collective: what affects one, affects all. A group of anti-racist white protesters was called to the front of the protest to form a barrier between demonstrators and the police.

The crowd marched to the Nossa Senhora de Candelária Church, chanting for their right to life and to their favelas even as police encircled the group, parading alongside. “I just want to be happy, to walk calmly through the favela where I was born,” sang demonstrators, citing the 1980s funk classic and favela anthem by Cidinho and Doca.

“We are risking our lives to say something that is minimal,” said Seimour Souza, legislative aid and coordinator at Rio de Janeiro’s Uneafro black youth group. “To have to say that our lives matter is really painful for us.” Souza lamented that police violence had forced community leaders like himself to pause their food parcel distributions in the favelas in order to take part in the protest. “Our cry is an urgent one. It is a cry of repudiation to the whole world, to say that black lives matter,” said Souza.

In front of the Candelária Church, demonstrators lay down and kept a minute of silence—interrupted only by the sound of helicopters whirring overhead—for the victims of Covid-19 and police violence. Calling the act to a close, organizers directed the crowd to disperse, to keep their distance and to avoid provocations.

A group of protestors retraced their steps along Presidente Vargas Avenue, passing tanks and horse-mounted police once more, returning to the march’s origin at the statue of Zumbi dos Palmares. In the shadow of the quilombo leader, they yelled: “Black lives matter!” 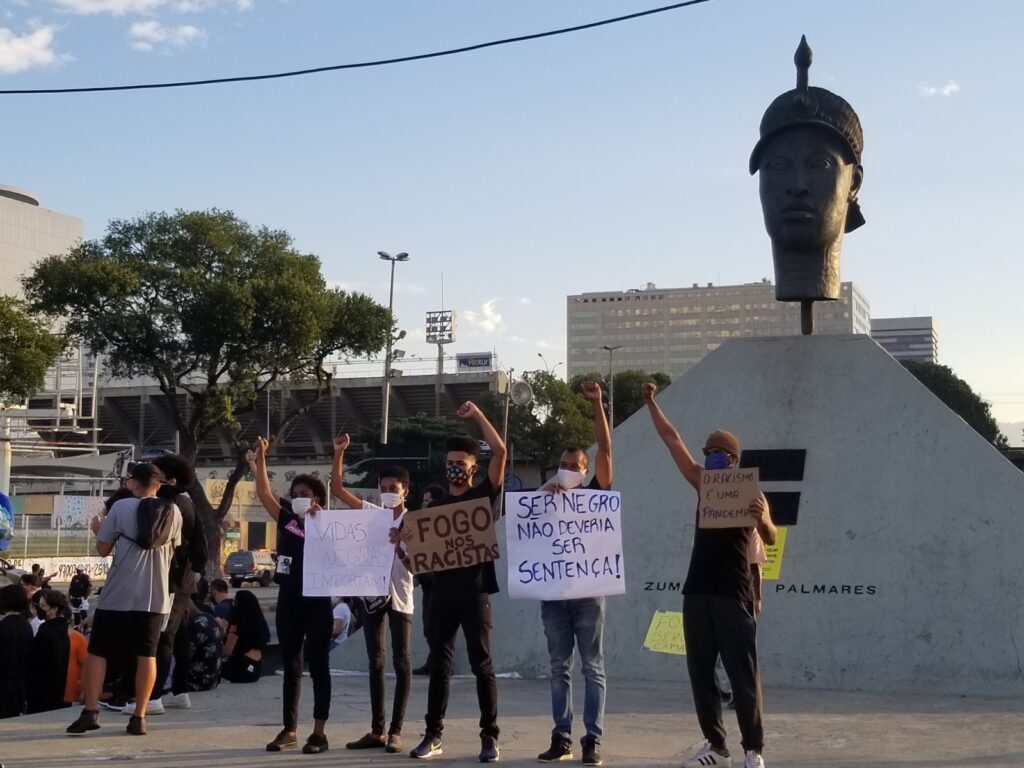