This is our most recent article on Covid-19 and its impacts on the favelas.

The virtual meeting began with Fernandes presenting the Health Connection project, which works to connect organizations, volunteers, institutions and local residents in their fight against the pandemic. According to the doctor, the project’s three objectives are: to broaden residents’ access to healthcare services; to develop an integrated model to fight Covid-19 that considers other aspects of daily life, such as social action, education, and health monitoring; and, finally, to provide a model that can be replicated in other locations. Health Connection consists of six phases through which residents or patients can move during treatment:

Much of the conversation was about the effectiveness of projects that connect institutions with local community leaders. Varella noted that, through the All for Health (Todos pela Saúde) program, he and a team of doctors financed various projects to assemble isolation beds for infected people in different Brazilian cities. But, according to him, the project failed precisely because there was no preliminary contact between the institutions and the populations, such as the relationship that Fiocruz maintains with Maré and Manguinhos, for example. Trindade Lima, of Fiocruz, explained that further actions of coordinated healthcare are occurring in ten other cities.

Dalcolmo, the pneumatology expert and researcher, raised the possibility of the post-pandemic sustainability of initiatives like Health Connection, which could act on the frontline in relation to other illnesses and comorbidities, like hypertension, obesity, and diabetes, to name a few. This would not only result in medical attention for those patients who need it, but also generate more information on favela residents. Pádua, from the Rio Unity Movement, stressed that it is possible to incorporate new elements to the project as it takes shape and demonstrates its success.

Community organizers noticed, right at the beginning of the Brazilian pandemic, that the Health Ministry’s protocols to contain Covid-19 would encounter challenges in the favelas. Thus, community leaders began to mobilize campaigns for food security, generating income for women, and health networks for residents, among others. Silva, director of Redes da Maré, highlighted the sheer number of residents within the favela complex—more than 140,000—which creates an even bigger challenge in attending to the population.

Evangelista, of the Manguinhos Community Council, listed other difficulties, such as water shortages and a lack of basic sanitation and adequate housing, which all increase risks for the population. Manguinhos residents even had to call on the Public Defender’s Office for water trucks and the removal of dead bodies from inside homes. On top of this, conditions that were already difficult worsened, seen in the increase in unemployment and the fragility of the SUS public health service. Evangelista reiterated what had previously been said regarding the integration between community leaders and institutions, stressing the importance of the Family Health Program’s work with Health Connection.

Telemedicine to Help Control the Pandemic

The concentration of professionals and services in large Brazilian cities is nothing new, and it poses particular challenges in the healthcare sector. Varella pointed out during the event that there are cities where there are no doctors and there never will be, because there is no urban infrastructure in place to attract such a professional. This is one reason why telemedicine, a remote tool for healthcare, is so important. Due to the pandemic, it has already been set up in many locations.

Mallet, founder of SAS, which has already provided over 9,000 consultations, says that in 95% of cases, patients’ problems can be solved without a visit to a healthcare facility—a place many people are currently avoiding because of the pandemic. The initiative values a treatment that is humanized and closely attuned to the needs of the population it serves, and does so with the help of community health workers. The project’s doctors and nurses also treat other illnesses and health problems, beyond Covid-19.

Every SAS consultation conducted through telemedicine is registered in partnership with the SUS [Brazilian public health system] Family Health Program, which makes the patient’s medical records available. Low-risk patients are seen by nurses, and those who are at high risk are seen by doctors. In addition, for Covid-19 patients who have a poor oxygen supply, with breathing difficulties, an oximeter may be provided for four or five days, to help either family members or the patient themself monitor their health and rapidly identify if hospitalization is needed.

The Good Data initiative, conceived by Bozza, combines technology with the aim of democratizing testing information, for patients as well as doctors and governments, and encourages efficiency in the SUS. The application can be downloaded on a mobile device, and once installed, users can fill out a form with their symptoms (or the symptoms of a friend, family member, etc.), which may lead to a referral for testing. Bozza stresses that not everyone will be tested due to the shortage of tests.

Telemedicine’s Difficulties and Ways to Overcome Them

The Internet is a great facilitator for many aspects of daily life, but not everyone has easy access, especially in some areas in favelas, according to Silva. On top of this, many residents own old devices which do not have the necessary technology to support more modern applications. One audience member asked a question about these challenges. 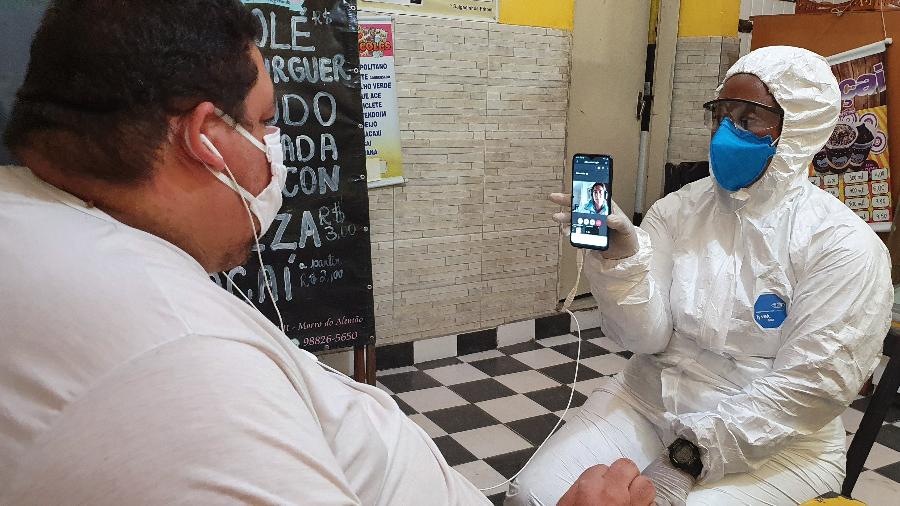 Mallet, of SAS, said that there are currently more than 300 volunteers working on the video test, explaining to patients how consultations take place. The patient is then offered more than 16 medical specialties. Bozza said that Good Data has formed partnerships with telephone operators so that the application does not use up data in people’s phone plans.

The speakers stressed the importance of partnerships with the private sector that aim to democratize access to health.

Telemedicine Coordinated with the SUS

Trindade Lima, from Fiocruz, explained that the project is a partnership between civil society, the private sector, and the SUS, and reiterated the necessity of active monitoring closely coordinated with local populations. She also pointed out that telemedicine is not an initiative that lies outside of the SUS, but rather that arises from it. Fernandes then stressed that the Family Clinics and Emergency Medical Centers (UPAs) are integrated into this process. Community health workers are the principal actors in the initiative, including through using their personal mobile phones to help communicate with residents about the tele-consultations.

The issue of reopening schools was discussed at the end of the event, and speakers stressed the importance of considering not only students, but also the professionals who work in schools. They emphasized that schools, daycares and other education centers play a crucial role in favelas.

Going forward, the project’s main priorities are maintaining the continuous flow of information and communication, principally with the population, insisting on protective measures such as face masks, cleaning, and social distancing, and pointing residents towards the different types of health services currently offered by the project, which can save lives.

Watch the launch of the Health Connection project here:

*The Health Connection is a partnership between Redes da Maré, the Manguinhos Community Council, Fiocruz, Good Data, SAS and the Rio Unity Movement, with support from the Red Cross, the Estáter Institute, the Rio de Janeiro city government, and All for Health (Todos pela Saúde).

Amanda Scofano has a master’s degree in Geography and is a doctoral candidate in the Post-Graduate Program in Geography and Environment at the Catholic University of Rio (PUC-Rio), where her research is focused on geo-processing and socio-environmental vulnerabilities.