The pile of furniture on the sidewalk started to form around 8:30am, when the Military Police arrived to carry out a repossession of a second floor space near Largo de São Francisco, in Rio de Janeiro’s downtown Centro. While families inside the building removed their belongings in cardboard boxes, their young children rode bicycles and played together inside a circle of police officers that had formed at the building’s entrance. The space, occupied in January, housed around 30 families, including 40 children. On Wednesday, September 9, the second floor that was full at dawn was empty by dusk.

When the occupation began, at the beginning of the year, few people lived there. However, after March, with the arrival of the pandemic and the need for adoption of physical distancing, many families lost their jobs. Without work, they were obligated to leave their homes, and took shelter in the occupation. In recent months, the group that lived in the second-story unit on Rua Ramalho Ortigão more than doubled. 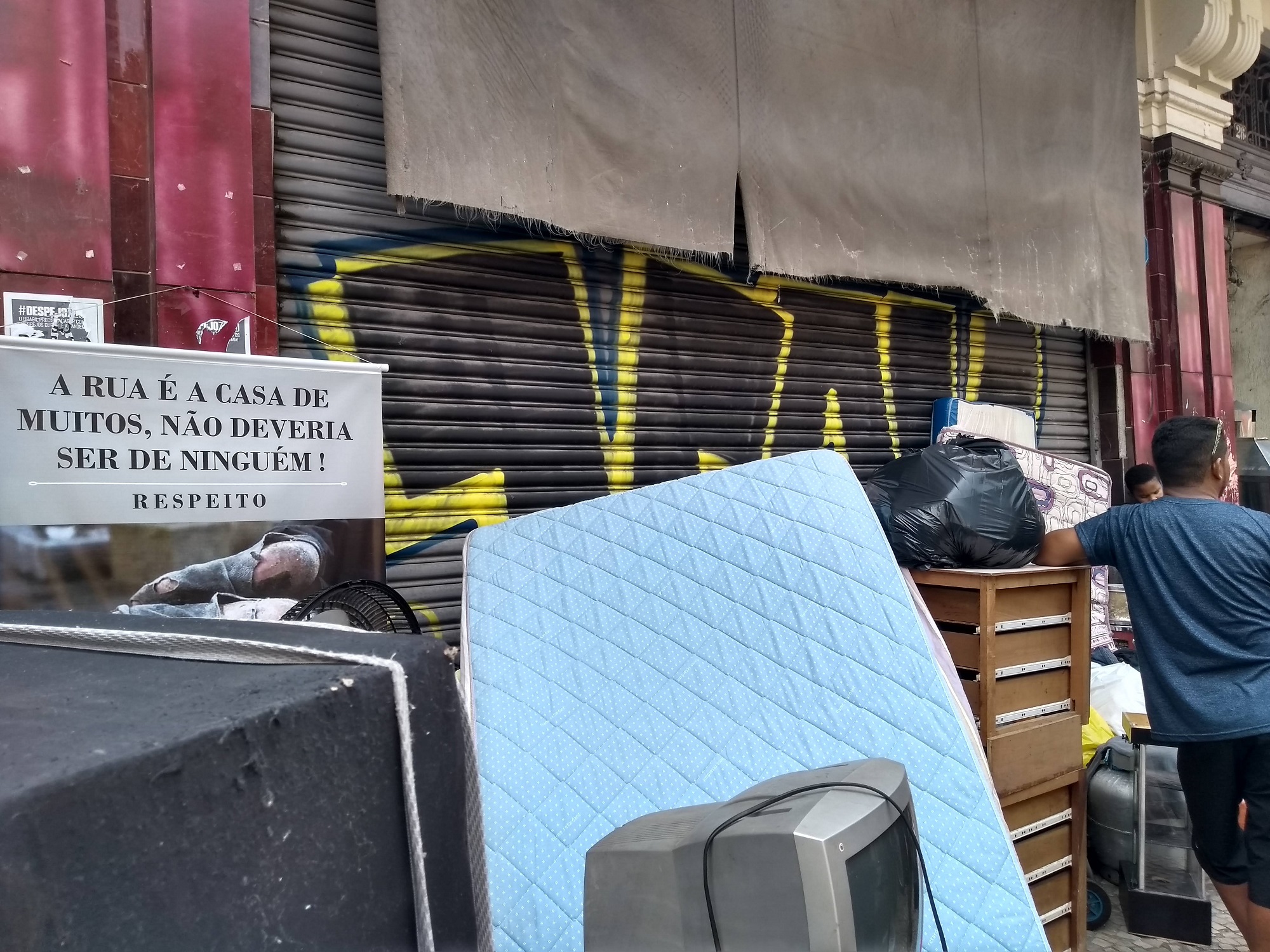 This is the story of Thais Nascimento, who went to live in the occupation with her seven children after losing her source of income. “I am a street vendor at entrances to events. I never lived in an occupation, ever. I paid my rent, I had a big house, and now I find myself like this. I have no way to work. There are no events anywhere,” she said. This is the family’s second eviction in 15 days. Before arriving at the downtown unit, she and her children were living in another occupation in Laranjeiras, in the South Zone, that was removed two weeks before.

This time, in addition to losing shelter, Nascimento is also seeing her children lose access to education, culture, and leisure, as those were offered at the occupation by volunteers. “They were not studying because of the pandemic, but here there is a literacy class, ballet, there is everything inside. The music teacher arrived to give a class, he’s there outside,” said Nascimento. With her youngest child on her lap, who turned two on September 9, she said that the oldest is 15. 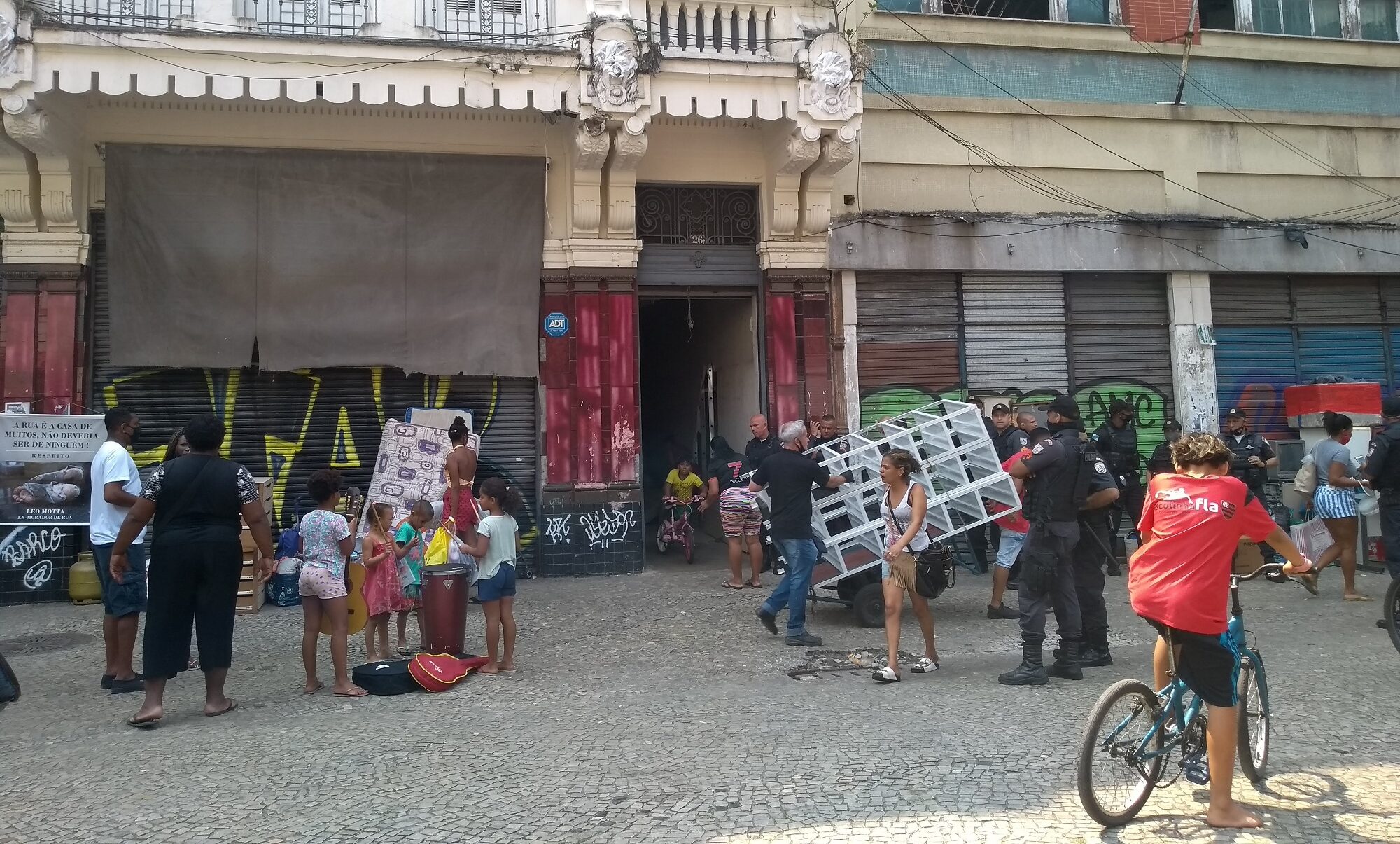 “I don’t know, it hasn’t even hit me yet. The police are here, they are wanting us to take our things, but mine are still up there. My children are very young. I don’t know what I will do.” With much fear of losing custody of her children, Nascimento prefers not to take the option of a public shelter. “The city government wants to offer shelter to us, a place where our children are cast aside and there isn’t even proper food to eat. I am not going.”

The lack of dignified treatment and basic conditions of food and housing in public shelters are reported by many families that live in the second floor occupation. Some were experiencing homelessness and went to shelters before they arrived at the occupation. People who know this reality up close prefer not to return. “Shelter? They didn’t even say anything about which shelter, they didn’t even say. Our intention is not to go to a shelter. I’ve already been through a shelter and I know what it is,” explained Queli Ambrósio, responsible for the occupation. 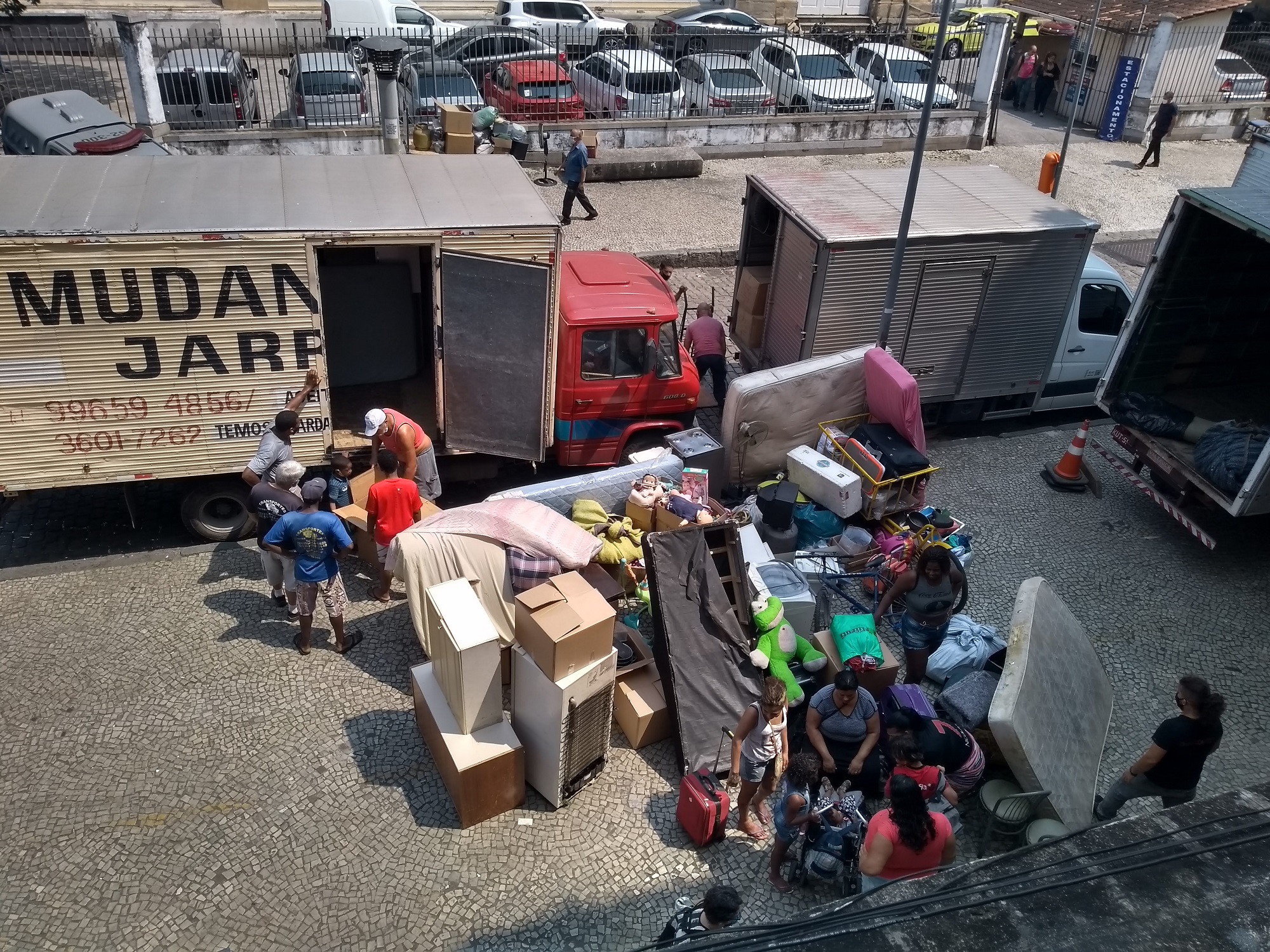 She told her story as she put things in boxes, still not knowing where to go. Before she arrived at the second-floor occupation, she lived with her five children in another occupation, also in the Centro. However, when part of the building began to collapse, she was afraid of staying with her children in the place. In 2017 she began, with a group of women, to work on cleaning the second-floor space. It took a little more than two years to transform the unsanitary space into an environment with minimum conditions for habitation.

In the building, the second floor was divided into three small areas, surrounded by barriers, cords, and wood. Each square represented the home of a family. On the first floor, where there is a large patio, many people used the space to store their work carts. It is also the space where the children’s school operated and where they played.

“Here, there is no one below the poverty line, all of them are below the extreme poverty line. They came to share a space with rats and cockroaches, without light and water,” said Léo Motta. He, who has already lived on the streets, today coordinates a project that attends to around 300 people experiencing homelessness. At the door of the occupation, blocked from entering by the police, he tried to get help on his cell phone. “Here no one needs a rifle, here we need assistance,” he emphasized, referring to the absence of public organs for social assistance and to the presence of high-caliber arms.

“The State only showed up when it was the police to throw us out, nothing more than this,” said Ambrósio, minutes before the city’s Nucleus of Social Assistance arrived. It was already almost 11:30am when the team arrived. In a written statement to RioOnWatch, the Municipal Secretary of Social Assistance and Human Rights (SMASDH) said that it was only informed about the repossession the day it occurred, because “it was not communicated [to them] by the organs responsible for the action.” It also said that the alternative proposed by the City, permission to stay in a city shelter, was not accepted by any of the 28 families that resided in the second floor space.

“We need public authorities to offer these families a place to live, not family shelters like Apoteose, which last week lost electricity and was in the dark,” said Motta. He said that even during the pandemic, evictions continue happening in Rio. In addition, as lots of families are losing their jobs and, consequently, their homes, because of the pandemic, the population living on the street has grown significantly, especially in Rio de Janeiro proper. A few meters away from the occupation, a long line crossed the Largo da Carioca square, waiting for donated meals. These people need a solution. “The people here need to be seen, they don’t need to be swept away,” Motta complained.

The families taken out of the second floor space were informed of the eviction on September 3, less than a week before the repossession. “They just issued the eviction order, said ‘take this paper, and you will be evicted,’” said Ambrósio. She said that the group obtained a security order in the justice system, which would need to be evaluated, to know if the eviction order would or would not really occur. The eviction order, however, was followed.

The residents who were not in the space when the eviction began had their furniture and belongings put into trucks and sent to public storage spaces. According to Ambrósio, they were not informed of the location where the items were being sent or how families could recuperate them. 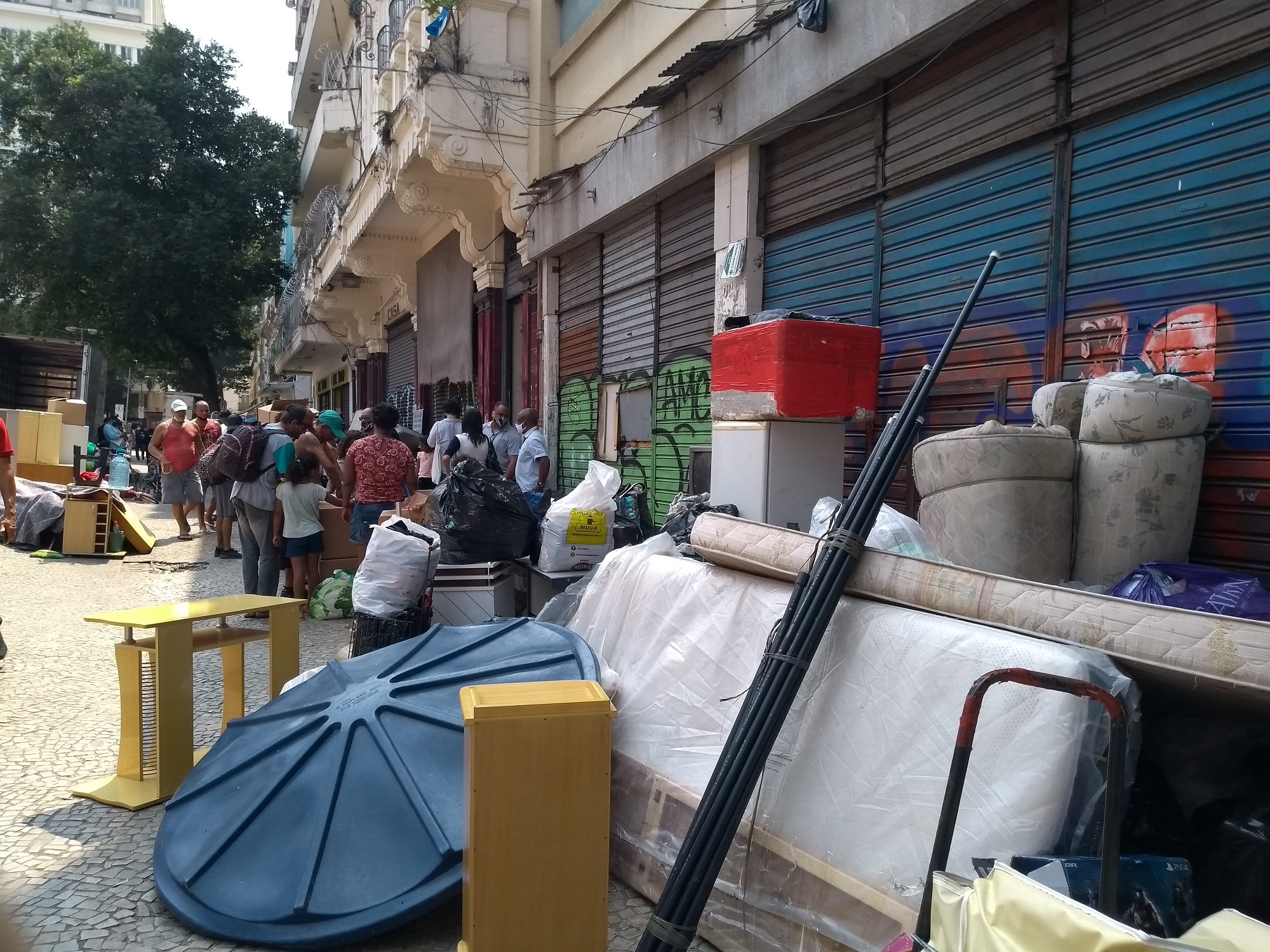 RioOnWatch asked the Rio de Janeiro Court of Justice to comment on the case, but they did not respond by the time of publication. The Military Police said, in a written statement, that “the arms utilized by the police are those called for by the current legislation.” The carrying of high-caliber weapons by the police “is part of the routine of the acting force of the Military Police, independent of occurrences.” It said there was no register of occurrences at the site.

Jaqueline Suarez is a journalist and Master’s student at Federal Fluminense University (UFF). She is also a popular communicator and independent video-documentarian. She lives in the community of Fallet, in Santa Teresa, in the Central Zone of Rio.