Since their beginnings, the popular history of Rio de Janeiro’s samba schools was built on the ritual of sociability of black people after abolition, mainly in favelas and carioca suburbs. The songs, the dancing, the storylines—this entire tradition—takes shape and is built as a championship in the first half of the 20th century, more specifically in 1932, hosted for the first time in Praça Onze, the cradle of the city’s Little Africa, with a competition between samba associations organized by the Mundo Esportivo newspaper.

Today the contest is divided into distinct regions of the city. The most famous one is held between the corners of the ‘balança mais não cai’ (‘sways but does not fall,’ a well-known structure erected in the mid 1940s as a housing project, and thus nicknamed due to a purported fault in the construction) and the Post Office headquarters, in the Central Zone of Rio, and the space that became known as the Marquês de Sapucaí Sambadrome, built in 1983 and opened the following year, in 1984.

Rio de Janeiro, the birthplace of samba, and also popularly known as the stage of the greatest show on Earth, has a popular saying: the year only begins after Ash Wednesday. The saying is based on the historical, symbolic and cultural relevance that is given to the holiday. In 2021, the days reserved for King Momo’s festivities felt different. This time, the spectacle built by samba schools did not have allegorical floats, samba dancers, the segments representing each samba school’s community, and the nostalgic old guard parading down the avenue.

By now, the schools would have completed their rites in the avenue “drunk on happiness,” to paraphrase União da Ilha’s 1989 samba. The Sambadrome is given great economic and media visibility every year. With most of the tickets being unaffordable for the city’s poorer population, the bleachers are mostly occupied by the wealthy. On the other hand, Rio’s suburbs never fail to put their show on the road. It is in the North Zone, where the neighborhood of Campinhos is located, that the samba schools of the Série Prata and Série Bronze access groups (silver and bronze series, respectively) parade. Even with less funding, the samba schools of Intendente Magalhães, in Campinhos, do not fail to show their beautiful parades and to embrace their people year after year. 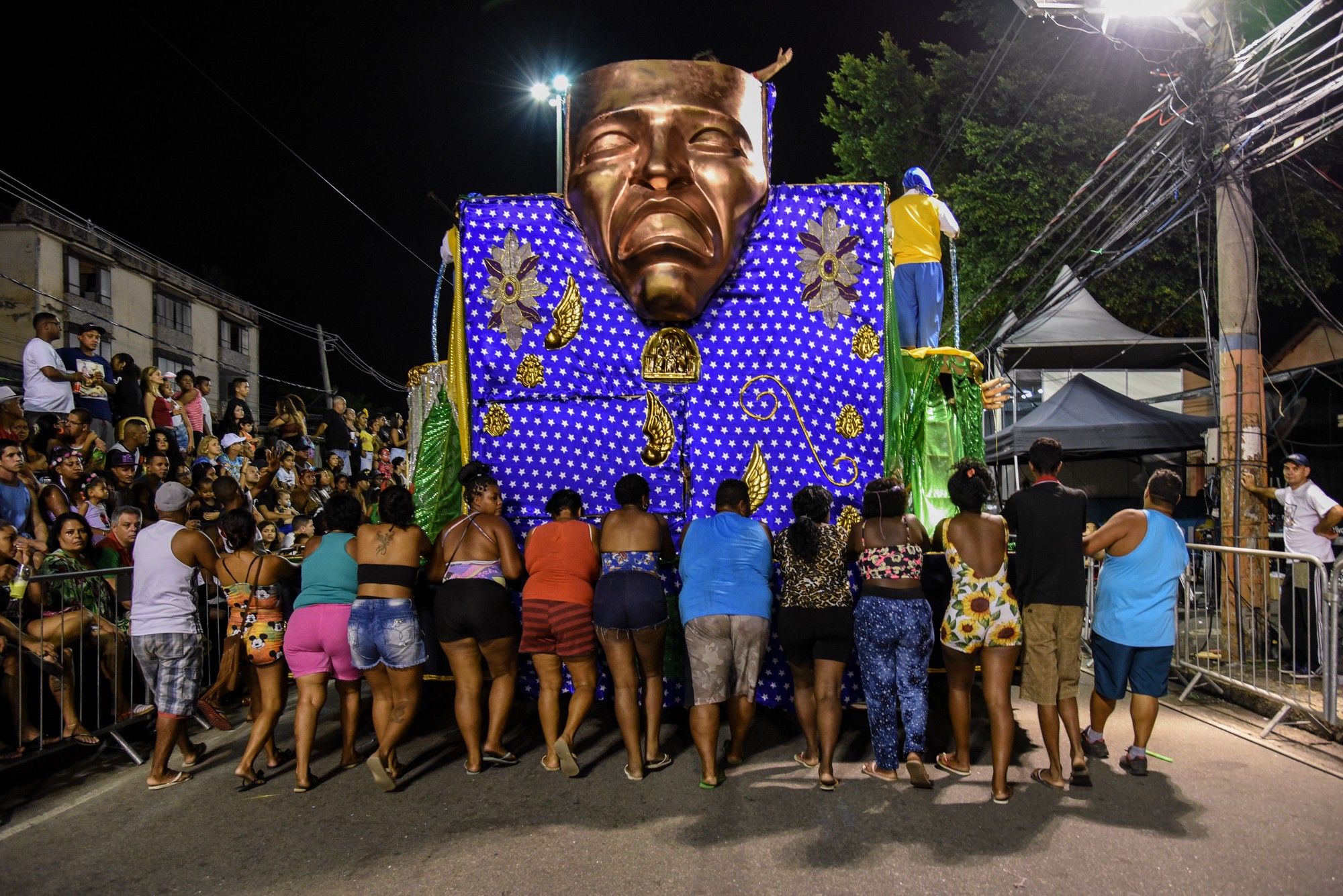 But this year, the heroes of the barracões (the samba school sheds where floats and costumes are made)—as Estação Primeira de Mangueira‘s samba A Bedtime Story for Grown-ups sang in 2019—will not be coming through. The sound, the dance, the colors, and the countless stories told throughout the nights of carnival, both in Intendente Magalhães and Sapucaí, give way to the dimming of lights and of sparkles, anxiously awaited by so many.

In an attempt to contain the bitterness of the biggest health crisis of the last century—which has already claimed 238,532 lives (as of February 14) in Brazil, including many samba school members—the city’s official carnival is not brightening Rio de Janeiro, popularly known as the capital of samba, for the first time since 1919. With no sound, no storylines, no abre alas, and no baianas—that is how Sapucaí and Intendente Magalhães are going to spend the carnival holiday.

The Interruption of the 2021 Carnival by the Novel Coronavirus

On March 11, 2020, right after the Rio samba school parade, the World Health Organization (WHO) declared that the world was living the new coronavirus pandemic. After this day, the lives of many were reshaped and lived new uncertainties in the face of a scenario that had to be redrafted day after day, including in the world of samba.

These uncertainties, and the worsening of the pandemic, led the parade, officially scheduled for February 2021, to be canceled and postponed to July by acting governor Cláudio Castro, though the mayor of Rio, Eduardo Paes, announced the cancellation of carnival in July as well. With all the unease that began to encircle society, countless craftspeople, seamstresses, ironworkers, carpenters, and professionals from various other segments of samba schools, were not paid their salaries and began to live on help, emergency aid, or attempted to reinvent themselves during 2020 to survive.

It was also in this context that countless members and workers of samba schools lost their lives to the virus. It is Brazil’s poorest that disproprtionately lose the unequal fight for survival across the nation. And it is from these faces that, most of the time, the various facets of samba associations are built.

‘I’m Saving Myself for When Carnival Comes’: União do Parque Acari

The prominence gained by the special group samba schools sometimes makes people forget about the access groups. One of the symbols of such local identity in Acari, in the North Zone, is the União do Parque Acari Samba School. The popular community group, still quite young in comparison to other carnival associations, carries all the expertise and experience of other bambas (masters).

The recreational organization emerged from the merger of sister and neighboring samba schools, Corações Unidos do Amarelinho and Favo de Acari. Both schools were born as street blocos, until they managed to get their papers in order and become affiliated with the samba school associations. With the union of these groups, União do Parque Acari was founded in 2018. Despite its young age, the school was a growing hit on Intendente Magalhães until its last parade, in 2020, with the theme, In the Beginning There was Creation, the Sky, the Earth and the Sea, With This the Union Each One Has Their Pair. Long Live Love! 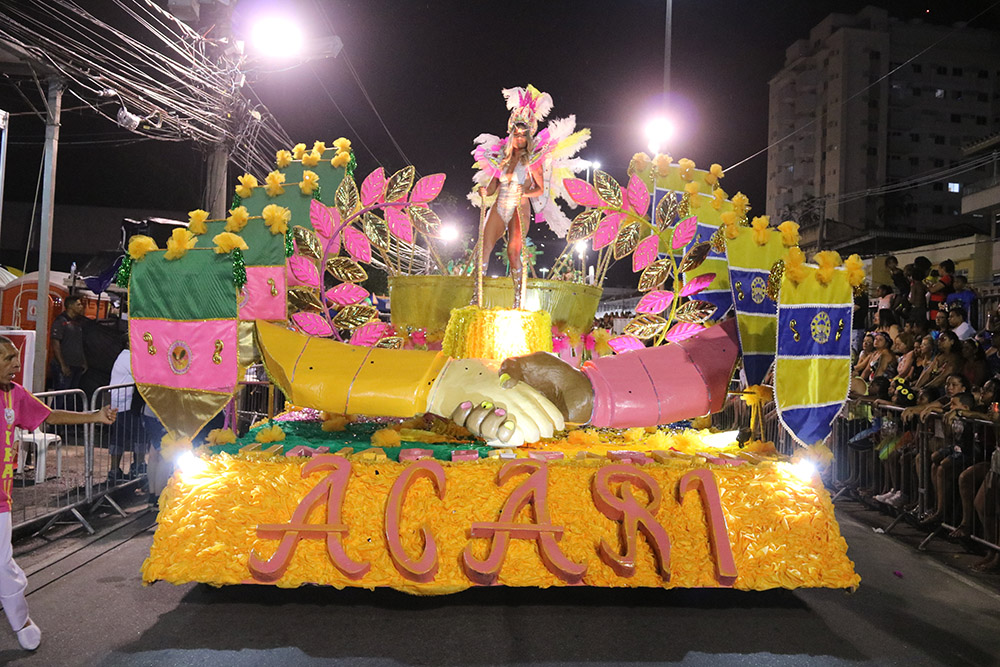 Its name is a tribute to the community of União do Parque Acari, which is nothing more than the union of the areas of Acari (favela) and Amarelinho (public housing).

In 2021, were it not for the pandemic, the school would have made its third appearance in the Série Prata, at Intendente Magalhães, with the theme: A Coroa Imperiana nos Braços do Acariense (The Imperial Crown in the Arms of the Acari Native), in honor of Madureira’s Império Serrano.

Índio, 22, a resident of Acari, is a member and worker of the União do Parque Acari who paraded under the Favo de Acari flag before the merger. Now with União do Parque Acari, he regrets not being able to parade in 2021, and recalls all the problems the coronavirus has brought the country and samba workers: “I see this year without parading as a very difficult year. It was a fatal blow for many in the samba world, for everyone in Brazil. This pandemic is destroying families, it’s destroying many jobs for people who need to work to survive, and it’s also affecting carnival workers.”

Índio is the school’s muse and has been parading in carnival for eight years, in addition to taking on other roles within the samba school. At União do Parque Acari he also works in the secretariat and makes costumes. Currently, after the 2021 carnival was canceled, he has been supporting himself with income from another job until official preparations for the 2022 carnival return. Carnival is everything to him.

“I have a prominent position. I am the muse, but I didn’t just dance samba. That was also my work. Thank God, I have my job today, but I used to live off that. And without carnival, I don’t live. I was born to dance the samba, I was born for the samba, I grew up in samba, and in samba I will die, for sure,” says Índio.

Despite his optimism regarding carnival, he points out that it is necessary to look at the festivity fearing that the spectacle might not even be held next year. “I hope that when it does come back, the income will be high because, wanting it or not, the schools will have to pay for it out of pocket, because of the losses and expenses they’ve had. And if they don’t want to pay the samba schools, there won’t be a parade next year again,” he concludes.

On the other hand, Paraíso do Tuiuti’s 1st porta-bandeira (woman who carries the samba school flag), Danielle Nascimento, talks about her work in 2020 helping members who underwent difficulties. Danielle, along with her partner, mestre-sala Marlon Flores, were invited by the mestre-sala Diogo de Jesus and porta-bandeira Ruth Alves to be a part of the Dance in Solidarity project along with eleven other couples of mestre-salas/porta-bandeiras of the special group in support of other members of the same segment who were going through financial difficulties.

In the project, Danielle helped raise funds through contributions and auctions to buy food baskets and make donations for those who were left without any income. The porta-bandeira, who has a rich history in the world of samba, has been parading in front of samba schools for 32 years and had never stayed a year off the greatest of samba stages. About not parading in 2021, Daniele says, “It’s right not to parade down the Sambadrome during a pandemic. It’s not just carnival that’s stopped, it’s the world, and it is for a greater cause, for a just cause. It’s alright, and yes the best decision is not to have parades.”

She also talks about the impact of the Dance in Solidarity project in a moment of helplessness in the lives of carnival workers, “Thank God we were able to help more than 200 families directly. We received very positive feedback from the families that, in addition to support given through food baskets at a delicate moment, received all of the group’s affection and attention. Everyone felt remembered, and valued.” But Danielle ponders: “That’s our job… what I regret is that most of us were left without help and support during this period. The world stopped, we don’t know when we will have carnival, but the bills still come in.”