With over 70 awareness-raising acts focused on the Covid-19 pandemic, on February 10, favelas and peripheries across the state of Rio de Janeiro once again took the lead in finding solutions and proposing policies for fighting the pandemic. The date—the Statewide Mobilization Day Against Covid-19 in Favelas—proposed and organized by the collectives and organizations  Rocinha Resists, City of God Front Against Covid-19, Grupo Eco, Roots in Movement Institute and Redes da Maré was approved by the Rio de Janeiro State Legislative Assembly (Alerj) and has therefore become part of the official state calendar.

Submitted on February 8 and approved in an Alerj plenary vote on the February 10, Law 9186/21, authored by state representative Mônica Francisco with the participation of favela civil society movements, requires authorities to reinforce permanent measures with impacted communities on various levels due to the effects of the pandemic, and to expand popular participation in health monitoring in favelas and peripheries. 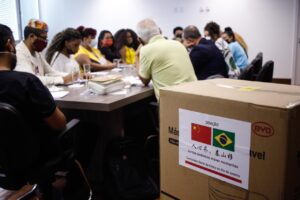 As part of the mobilization day, state representatives and community leaders discussed actions to combat Covid-19 and to promote social and economic welfare in the state’s favela and peripheric territories during a gathering at Alerj.

Alerj donated 60,000 masks to Rio’s civil society movements on the Statewide Mobilization Day Against Covid-19 in Favelas. The meeting was part of the mobilization to disseminate the Fiocruz tender for which the legislative destined R$20 million for actions related to fighting coronavirus in vulnerable areas.

Since the beginning of the Covid-19 pandemic, Rio’s favelas and peripheries have felt the hardest effects of the economic and sanitary crisis brought on by the coronavirus. However, almost one year after the crisis took hold, numerous of the state’s municipal governments, as well as the state government itself, failed to create actions and public policies aimed at caring for this population, with the exception of the City Administration of Niterói.

Favela and periphery activists, collectives, communicators and community leaders, along with civil society organizations, were the ones to create and produce solutions to meet the needs of a population abandoned to its fate in the midst of the world’s greatest sanitary crisis. 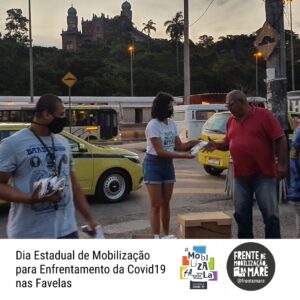 On the 10th, councillor Tainá de Paula organized an online roundtable about experiencing the favela in the context of the pandemic, with the participation of leaders from City of God, Providência, Santa Marta, Rocinha, the Federation of Rio de Janeiro’s Favelas (FAFERJ) and Fiocruz, among others.

During the event, at Morro da Providência, community leader Cosme Felippsen was interrupted to the sound of rifle shots reminiscent of a scene described in Cidinho and Doca’s “Eu Só Quero é Ser Feliz” funk tune.

Favela leader is interrupted to the sound of machine guns in the middle of a live on D-DAY AGAINST COVID IN FAVELAS in Rio de Janeiro.

Gunshots and people wounded were reported as a result of the police operation in Morro da Providência, in Rio’s Centro, besides the interruption of the Light Rail Transit (VLT) line.

Meanwhile, in the City of God, the “Rolezinho (Little Stroll) Around the City of God” was organized for the 10th to talk to residents about the challenges of fighting Covid-19 in favelas. Both there and in Jacarezinho, activists and residents had a hard time carrying out acts of community organization due to police operations.

The contrast between the attempt to exercise one’s rights as a citizen and the violence existing in favelas makes us recall that the challenges faced by thousands of favela residents go way beyond the pandemic and will persist after it.

The #VaccinesforFavelasNow Campaign is Launched 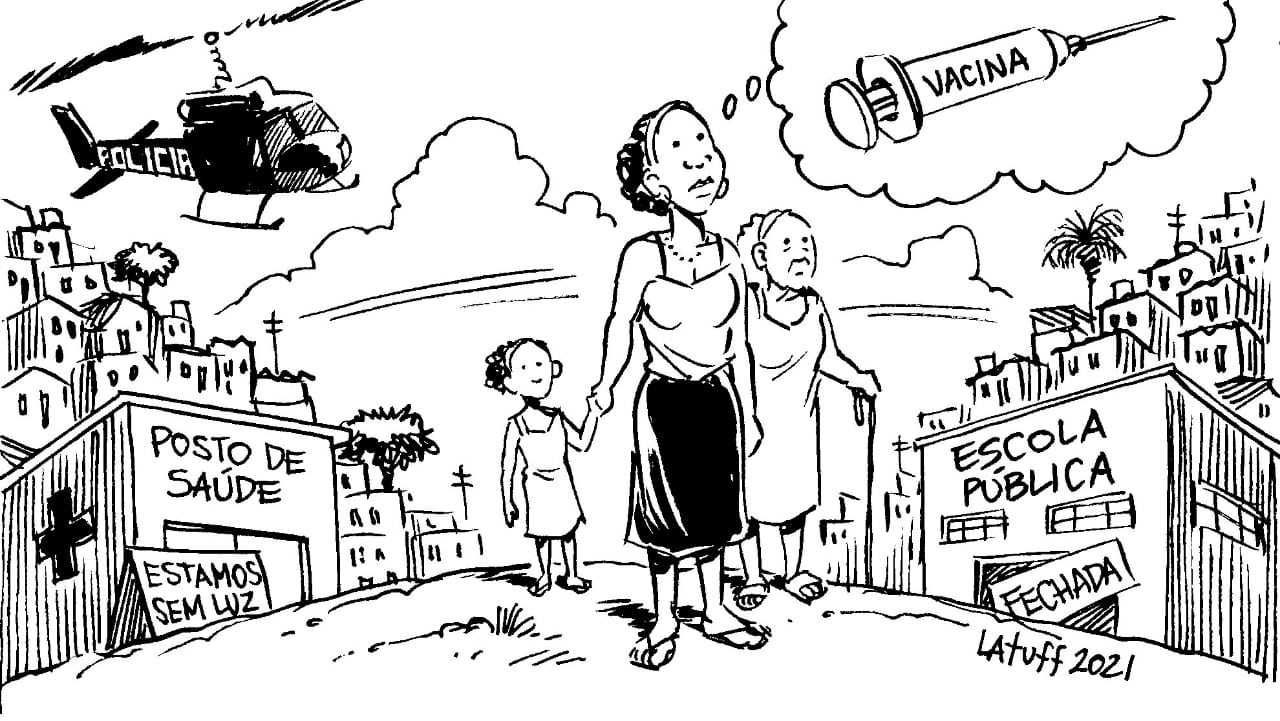 The Covid-19 in Favelas Unified Dashboard, that has been publishing data on the scope of Covid-19 in the favelas of Rio de Janeiro in the absence of data produced and published by city or state governments since July, participated in the acts by launching the “Vaccines for Favelas Now!” campaign as a means of pressuring public authorities to include favela residents in municipal, state and federal Vaccination Plans.

“Whether due to lack of water in homes, widespread access to health services; high rates of essential and informal workers for whom social isolation is infeasible; difficulty in isolating; high intergenerational density in homes; lack of adequate information; and countless other factors, these are the people who have the most difficulty following safety protocols, like spending on masks. It is indisputable that we must look for ways to prioritize the residents of these territories in the vaccination policy,” the campaign points out.

The Covid-19 in Favelas Unified Dashboard covers 227 favelas in Rio’s metropolitan region, with 221 of them being in the city of Rio and representing 65% of favela households, five favelas in Itaguaí, and one in Mesquita.

Favelas and Universities in the Fight Against Covid-19 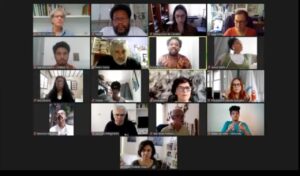 Another February 10 initiative was a roundtable of universities, research institutions and residents discussing “Favelas and Universities in the Fight against Covid.” The debate had the participation of Nísia Trindade, president of Fiocruz, and Denise Pires, chancellor of the Federal University of Rio de Janeiro (UFRJ). Trindade reiterated that the right to safety in a pandemic is as important as the right to the city or to health services, although “it is extremely difficult to give this agenda the adequate treatment.”

According to her, safety policies that do not take everyone’s right to the city into account, are not treating all as equal citizens. Trindade also remarked that acknowledging the role civil society leaders in the favelas is just as important as fighting Covid itself. Professor and doctor Denise Pires de Carvalho from UFRJ, on the other hand, remarked that “the vaccine Brazil needs the most today is against anti-science movements.”

Live Act: Struggle and Grief in the Pandemic 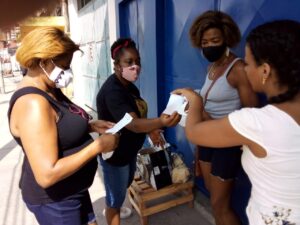 With leaders from the states of Amazonas and Rio de Janeiro, the live act held a debate to enable the acts of resistance that have been vital in saving lives in both states.

“There is no room for struggle if there is no room for grief, if no room has been made for grieving. We are asphyxiating, dying every day like fish out of the river. We are still dying! We have been dying for more than 15 days but they don’t show it on TV because it’s no longer newsworthy. People are choking to death and we don’t have a national crisis. But you want to know why? Because it’s happening in Amazonas. These deaths have color, class and gender,” protested Aline Ribeiro, from the Banzeiro Feminist Collective and the State Front for the Disencarceration of Amazonas.

Acting through the “Tune into Corona!” campaign, Fiocruz seized the opportunity supplied by the Mobilization Day to launch audios and radio soaps about the Covid-19 vaccination, besides new campaign materials that answer the population’s doubts about reactions to the vaccine; who needs to take it; advice to pregnant women, among other information.

The collective of Tijuca’s favelas, Occupy Tijuca and the Society and Culture Research Group, together with UFRJ’s Research Nucleus on Public Policies in Human Rights (NEPP-DH) delivered the panel “Tijuca’s favelas during the pandemic in 2020-Action, Perspectives, Identities and Social Movements.” The debate had the participation of sociocultural activists from the Salgueiro, Formiga, Borel and Indiana favelas. 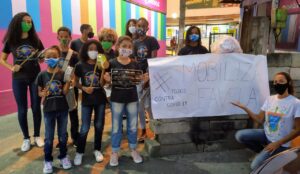 While all of this was happening, the most intense action was taking place locally. In Vila Cruzeiro, a percussion performance was held, and masks were handed out to the community’s residents. In Maré, various favela collectives, fronts and institutions carried out the Maré Mobilization Front and, along with Palafita 174 distributed masks and hand sanitizer at the entrance to Vila do João, one of Maré’s favelas. 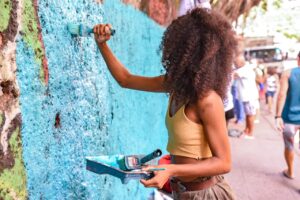