Have you heard of energy efficiency? This was one of the main questions asked to the residents of the favela of Conjunto Esperança, in the Maré favela complex, in Rio de Janeiro’s North Zone, during a survey conducted by me, Aline Marieta, an architect from the community. My intention was to understand how much people knew about energy efficiency, and to explain how to apply it in their daily lives.

Energy efficiency is nothing more than making rational use of energy. An energy-efficient product is one that performs its job while consuming the least possible amount of energy—such as today’s household appliances, which usually carry the Procel seal, indicating how energy-efficient the product is. It is very important to pay attention to this information because products that are outdated and do not have this seal should be removed both from stores and from the production lines of the companies responsible for them, and these companies should then rethink the model in question and redesign it more efficiently.

Another efficient use of energy are solar panels, which capture sunlight and generate energy—although they do not have very accessible prices, creating an impediment to their acquisition. In the long run, however, the use of these panels would bring a great reduction in electric bills, compensating the investment made. Furthermore, some banks are already offering solar panel loans. In other favelas in Rio de Janeiro, including Santa Marta, this has been done by the residents themselves.

The realization of energy efficiency is important both for the environment and for those who use electricity daily and are obliged to pay, though amounts and fees charged on electric bills are often abusive. Energy economy generates a chain reaction: less energy consumed at home generates less energy generated in power plants, which generates less damage to the environment and, consequently, fewer environmental disasters. Therefore, energy efficiency is of paramount importance for everyone: whether reflected in one’s individual energy bill or in ensuring a healthy environment.

In order to understand the perception of the residents of one of Complexo da Maré’s 16 favelas on this theme, a series of in-depth interviews was conducted between February 1 and 7, 2021 with 16 households—eight apartments and eight houses. Although energy efficiency is a very important issue, we realized through this survey that little (or nothing) is known about it, with information about energy efficiency reaching only the more privileged classes.

A Geofusion survey conducted in 2015 pointed out that the neighborhood of Maré is among the ten most populous in Brazil. It ranked sixth, with a total of 30,585 people per square kilometer. At that time, the total population was 132,977—though the neighborhood has now reached 140,000 inhabitants, according to the Redes da Maré census. It is precisely in spaces like this that the subject of “energy efficiency” should be widely disseminated, and where the information should arrive the most. But that is where it has the lowest reach.

The research took place in the favela of Conjunto Esperança, better known by residents as Palace, and made evident how much the subject is still unknown by the local population. The good news is that, although the subject is unknown, that does not mean residents are environmentally unaware or spend unnecessary amounts of energy. The switch from incandescent lightbulbs to fluorescent or LED bulbs, which are more energy efficient and last much longer, for example, is a common energy-efficient choice made by residents, even though there is a considerable difference in cost.

The apartments occupied by eight of the interviewees are part of a public housing project built in 1982, during Maré’s second growth phase, when public authorities intervened in the area with Project Rio. The goal was to resettle people who previously lived in Parque União’s stilt houses. The community first emerged with the construction of 35 buildings containing 40m² apartments. Each apartment had a basic floor plan of four rooms: a living room, a bedroom, a kitchen, and a bathroom.

Although much of the area was planned and built in accordance to a government project, this does not mean that the architecture of the buildings was thought out efficiently. When talking to the residents, we noticed the same complaints, whether in the government apartments or in the self-built favela houses, about too much sun hitting bedrooms and living rooms for most of the day, making it difficult to stay in these spaces without the use of fans. The good part, however, is being able to take advantage of the sunlight to save electricity. With enough light during most of the day, the use of artificial lighting is unnecessary. 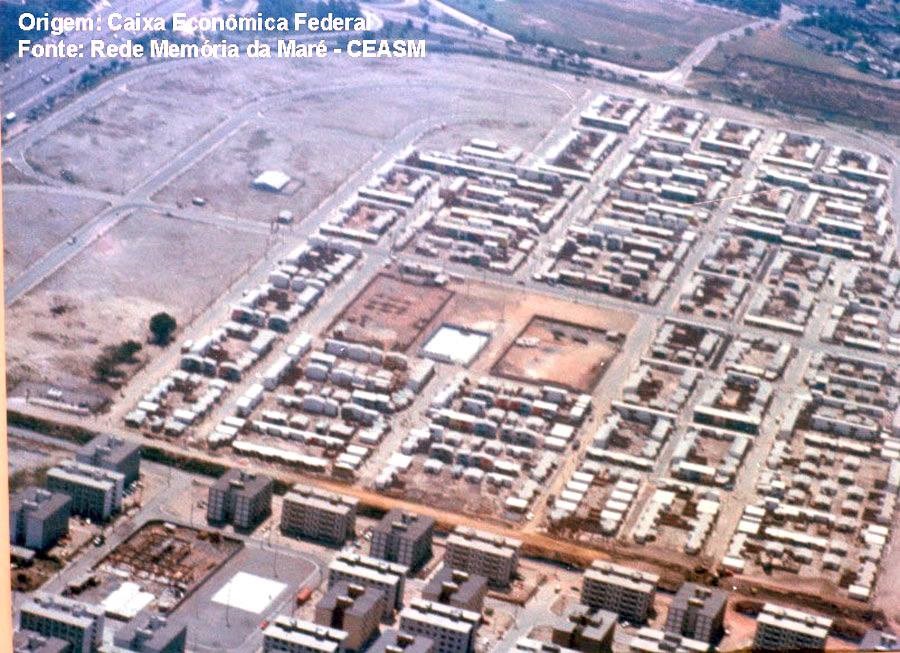 The apartments were also not planned to accommodate the growth of families and the possibility of having children or visitors. As the number of residents per apartment increased, it was necessary to divide living rooms in order to create one more bedroom. This made the natural cross ventilation of these spaces difficult, because the only existing window was in the living room, which ended up being part of the “new” bedroom.

Some of those living in these areas are former residents of the stilt houses who were given the property. Others went to live there on the recommendation of family and friends. The area is well-located and has easy access to other neighborhoods in Rio. The community has access to public transportation and businesses running 24×7. The community is one of the least populous in Maré, with fewer than 6,000 inhabitants.

One of the region’s characteristics was that, originally, it was only meant to accommodate a housing project with apartments and their respective garages, with no room for commerce. The solution found by the population for this planning mistake was to occupy the banks of the Cunha Canal. The “Vala Shopping” (the “ditch mall,” as it was known at the time) thus appeared, along with another part of the community, with self-built houses having stores on the ground floor and homes on the upper floor. Many of these occupants went to live in Conjunto Esperança due to the possibility of building their own houses and working there.

A common feature of the self-built structures is that they are divided into two types of housing: spacious and airy houses, particularly those located on the back of land plots; and studio apartments, with little space and almost no cross ventilation, in front.

The survey was carried out over ten days, with the residents of these two types of homes: eight self-built houses in the favela, and eight apartments in the original housing complex (which have since been modified by residents). We asked 26 questions, among them about energy efficiency and its uses.

Of the people interviewed, at least 31.3% pay some kind of energy fee. However, they report absurdly high costs in relation to their consumption and services provided. In addition, the voltage supplied by the electric utility is not enough to serve the entire population of Maré, resulting in several complaints about power failures and blackouts in the summer.

There is a Surge Protection Device (SPD) that can only be installed through grounding. It serves as protection against external atmospheric surges and electrical overloads, for example when there is a power outage. When the electricity comes back, the voltage is often higher than normal, which is sometimes enough to burn plugged in appliances. But as both types of homes in Maré were built without grounding, it is impossible to install SPDs. Between this and other problems found in the community’s power grid, there is also the absence of installations made in accordance with the safety standards of the Brazilian Association of Technical Standards (ABNT), both in the public housing apartments built by Project Rio and in the self-built homes.

During the research done for this article, there was a day of heavy rainfall in Rio that not only flooded several parts of Maré, but also resulted in enough rain to cause several power outages, leading to the loss of one of my appliances. Browsing social media, we find that this is unfortunately the reality of many people. With frequent power outages, electronic equipment or household appliances can suffer damages or total loss.

But what does this have to do with energy efficiency? Everything! If wiring was done according to electrical installation standards and had the SPDs recommended by such rules, the loss of products in this way would be rare.

Observing local urban planning, we can identify a few trees in the streets and the vast vegetation belonging to the extension of the Fiocruz campus at the entrance of Conjunto Esperança. However, they are not enough to cool the hottest days and nights, which cause 90% of interviewees to have air conditioners at home and use them throughout the night. 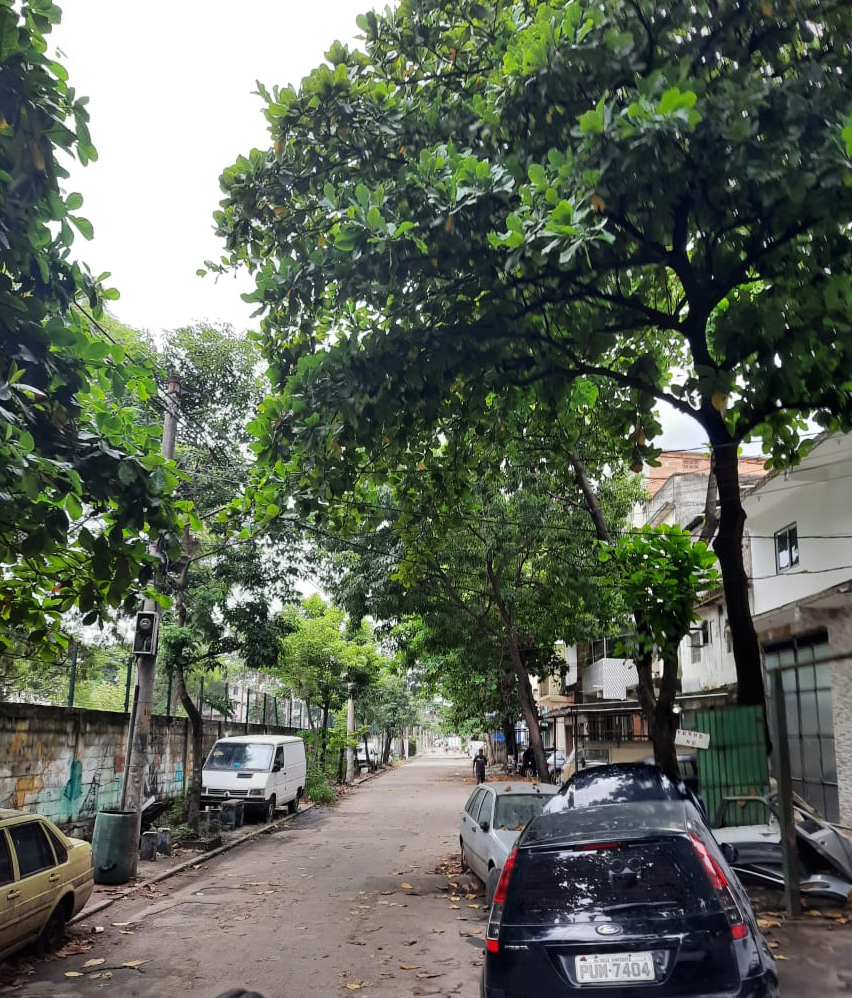 Apartments facing east, north, and west are hit hardest by daytime heat. They get sun exposure almost all day, especially those on the sides of buildings, which get the morning sun on one wall, and the afternoon sun on another. Houses facing the street have northwestern façades and also get more of the afternoon sun, which is the strongest.

When comparing the self-built houses with public housing apartments, we come across an important point of comparison: although they also get a lot of sunlight, houses generally have good cross ventilation and larger rooms than apartments, which allow for wind circulation. They, therefore, provide better thermal comfort, especially homes at ground level and on the back land plots.

A few things could be done to improve the thermal sensation, and consequently the quality of life of Maré’s self-built houses and Conjunto Esperança apartment residents. Planting trees around the buildings; using blinds or “curtains” made of plants on front windows; and even growing plants indoors would help. Another great solution, and one which has already been tested in the region, is the green roof. The use of vegetation on roofs would reduce thermal sensation, and also purify the air, besides considerably reducing energy consumption. The green roof would also allow for a peri-urban vegetable garden, which is when vegetables and seeds are planted in peripheral areas. Even in the middle of a favela, we would then have excellent spaces for interaction, with the possibility of harvesting and of enjoying nature.

About the author: Aline Marieta, 32, is an architect and urban planner. Born in São Paulo, she was raised in the favelas of Rio’s North Zone and now lives in Complexo da Maré. She is the creator of @edificandodecoracao and a member of the collective Eco Maré, which aims to take environmental themes to the favela and raise awareness of their importance among residents.

About the artist: Raquel Batista is a visual artist and works as a photographer and illustrator. A black woman, resident of Rio’s West Zone, she is an undergraduate at UFRJ’s School of Fine Arts.