This article is part of a series created in partnership with the Center for Critical Studies in Language, Education, and Society (NECLES), at the Fluminense Federal University (UFF), to produce articles to be used as teaching resources in public schools in the city of Niterói, Rio de Janeiro’s sister city across Guanabara Bay.

On November 4, 6 and 8, 2020, the First Favela Education Fair was held online by the Tela Preta Tech (Black Screen Tech) project, focusing on the specific context of education in favelas. The event brought together community educators and young residents with one of its goals being “to understand that we can and should use technology for development and socioeconomic growth in favelas.”

Organizer of the event, Tela Preta Tech is a four-woman team: Livia Almeida, a Civil Engineering undergraduate at the Federal University of Rio de Janeiro (UFRJ); Natacha Carvalho, a Literature undergraduate at UFRJ; Paloma Porfirio, a Social Sciences undergraduate at UFRJ; and Renata Siqueira, a social scientist and doctoral student in Production Engineering at COPPE/UFRJ. Tela Preta Tech emerged during 2020 in response to the need for a line of work that would bring together technology and education in peripheral areas, through digital inclusion and active empowerment, especially for black women. The Ubuntu_Labe program—“reducing racial inequality in Rio de Janeiro through open innovation in smart cities”—served as a meeting point for the founders.

Interviewed for this article, Siqueira said that “education is the engine for transformation. It develops critical awareness so that people understand themselves as individuals capable of changing their reality and the reality of others.” Porfirio says that, “the concept of favelas comes from a process of neglect. Education broadens our view and changes this negative perception created about our territory.” Carvalho—in response to the reality that access to education in the peripheries, already limited, was further compromised by the arrival of the pandemic, and the technological dependence that came with it—reflected that, “there are ongoing discussions about hybrid education and how education is migrating more and more to technology. But this doesn’t make any sense in favelas, there are no resources.”

On the first day of the event, the theme was “Favela-style Education,” featuring speakers such as grassroots educator and Unifavela coordinator, Laerte Breno, and Renata Siqueira from Tela Preta Tech.

“Who’s thinking about education?” asked Siqueira, opening the event. “Education is not for black, favela and peripheral students. And that’s a problem, when the majority of the population does not belong to the A and B (economic) classes.” Along these same lines, Breno highlighted the importance of providing education in a contextualized way in order to enhance his students’ abilities. “It’s not just about introducing content. In order to truly progress, you have to adapt your methodology to the territory since many teenagers have to combine work and studies.”

According to Breno, the lack of references prevents young people from feeling empowered to make their dreams come true. In this context, education needs to be thoughtfully stimulating in order for guidance to be effective. Choosing narratives from the students’ palpable world allows them to identify with their environment. Breno points out the importance of perceiving favelas as a power: “For me, the favela is music, light and ancestry.”

On the first day of the Fair, there was consensus among the educators present that public schools are focal points for neighborhoods in a way that goes far beyond education, as they also provide food for students and include them in cultural contexts. All agreed the pandemic interrupted this important local support. 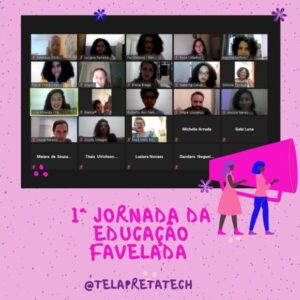 The theme on the second day was “Education and Technologies,” with speakers Christian Basílio, a student in Public Management at UFRJ and co-founder of Ubuntu_Labe, and Gilberto Ramires, who currently studies Educational Technologies at the Estácio de Sá University.

Basílio recalled that there are already several technological examples inside the favela, “In order to think about technology in favelas, you have to expand your view and the experience with technology beyond social media. We could start this by building an appreciation for what we already have in the favela today. Technology is us.”

According to Basílio, algorithmic racism is a natural feature of Western technology, present in everything from Instagram and its whitening filters, to facial recognition devices. “Technology is shaped in this way because it is a reflection of the white market that creates it, promoting the marginalization of black people… Although technology can be used as an instrument for social change, it is difficult to have equal opportunities and to meet socio-economic requirements when there are structural racism barriers in the way,” said Basílio.

Porfirio pointed out how we can reverse this process of technological estrangement by adapting computational thinking, “Technology must lead the student to become a creative thinker, to develop through collective work that involves experimenting with new ways of relating with the world… Encouraging students to be creative is essential to developing their qualities.” According to Porfirio, in order to apply this creative thinking, four important elements are needed: self-esteem and initial encouragement; references and access; mutual support and community strength; and, finally, opportunities.

Ramires pointed out that technology is a set of techniques, implemented in many different forms, exemplifying that “the Marginal Yoga project, for example, uses the technology of physical self-care and applies it in the Baixada Fluminense.” Ramires defended the concept of Afrofuturism as a way to contemplate the real possibilities of the black population occupying and directing their future through collective power. “To work with education is to work with responsibility,” he concluded.

Siqueira highlighted that when it comes to favela education, even if trajectories are individual, successes are collective. Sharing one’s own experiences in order to understand and empathize with others, provides a sense of ancestry and connection that allows us to value not only our own experience, but the experience of the other. “This is what is known as an affection quilombo,” said Siqueira. 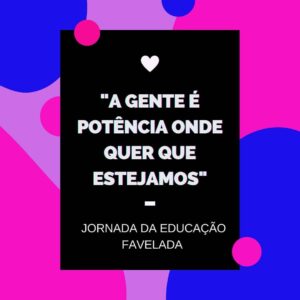 On the third day of the Fair, the theme was “Favela and the Future,” with speakers Rosa Diaz, who is a social scientist and Project Coordinator of Rio’s Atados platform, and Gizelly Vinagre, a Guadalupe resident, qualified flight attendant, undergraduate student in International Relations at UFRJ, and scholarship recipient to pursue a degree in Accounting Sciences at Veiga de Almeida University.

Diaz explained how the Atados platform uses technology as a social good, putting future volunteers in contact with organizations. “In times of crisis, creating bonds between people is important to be able to organize and create real change.” Diaz said that during the pandemic, demand has increased 45% compared to previous years, and that there was also a large digital drive for donations.

“It is always said that the favela is the periphery, but for me it is the center,” said Siqueira. Along with other educators, she is part of the Bola pra Frente Institute in Complexo do Muquiço, in the North Zone. “We have to put our worldview out there so that we can reinvent ourselves by creating our own references… Muquiço in the world, and the world in Muquiço,” said Siqueira. The Bola pra Frente Institute is the only “extra” place in the neighborhood where students can have access to sports, educational and cultural activities with an integrated education methodology.

“Through the Bola pra Frente project, we went for a walk through the [Muquiço] favela and I found out why the houses follow a specific pattern and the way they look from above… it has to do with the Deodoro railway workers… actually, my grandfather worked [on the railroad] and I didn’t know,” said one of the Fair’s young participants.

Giselly Vinagre, a member of the Bola Pra Frente Institute, declared that despite the many difficulties she underwent in pursuing an education, the institute provided her with enough self-confidence to persist, and enough power to say, “I not only want my life to change, but I want the lives of others to change too.”

Watch Some of the Talks from the 1st Favela Education Fair Here: