The death of 28 people in Jacarezinho, a favela in the North Zone of the city of Rio de Janeiro, was labeled a mere “police operation” by the State of Rio de Janeiro’s security forces, despite the massacre that resulted. The event, which occurred on May 6, was the largest massacre in the history of Rio. Various reports of summary executions, torture, home invasions and even the confiscation of mobile phones are being investigated by the Public Prosecutor’s Office of Rio de Janeiro and the Civil Police.

The massacre cannot be called an operation because it did not aim to hold the suspects criminally responsible and take them in alive for questioning. It was an incursion which resulted in the application of a summary execution sentence. The detainees who surrendered were executed despite neither presenting a threat nor resisting. Among the dead, just four were targets of the investigation which motivated the operation.

The dynamics of the incursion into the Jacarezinho favela are repeated in other areas. Over the last five years, Greater Rio de Janeiro’s Baixada Fluminense region recorded at least twelve massacres in eight cities. These data come from a survey carried out by the region’s Fórum Grita Baixada organization, using reports released in the media. The Jacarezinho massacre had one less victim when compared with the largest massacre ever recorded in the state of Rio de Janeiro.

The largest massacre in the state of Rio took place in March 2005, when 29 people were killed in a single night in different parts of the municipalities of Nova Iguaçu and Queimados. Investigations demonstrated that the victims were killed at random, revenge killings following the dissatisfaction of a group of police officers with the change of command in the Duque de Caxias battalion. The investigations and potential penalties on the corporation were purportedly the trigger for the killing.

Massacre—chacina in Portuguese—is the term used to describe the occurrence of multiple killings in the same act and in the same place, but it does not have a specific classification in the Brazilian Penal Code. For this reason, the Civil Police do not record them as such, classifying them as premeditated murder (when there is intent to kill) instead. Consequently, the Public Security Institute (ISP) follows this example in their organization of official data. “Massacre” is thus a nonexistent term as an indicator—in the same way that forced disappearances are categorized by police using generalized terminology, as “missing persons.” Such terms have the immediate effect of making critical episodes and cases invisible, as well as making it more difficult to establish public policies that target the reduction of these crimes.

In the absence of an accurate indicator, massacres are included under unsuitable labels like “premeditated murder” and intentional violent lethal crimes (which group together premeditated murder and serious physical injury or armed robbery resulting in death). According to the ISP, the 13 municipalities which make up the Baixada Fluminense region recorded, together, 965 premeditated murders in 2020. In the first trimester of 2021, 264 had been recorded. Intentional violent crimes in the region totaled 1,002 cases in 2020 and have maintained a stable trend in the first three months of 2021, with 274 incidents. 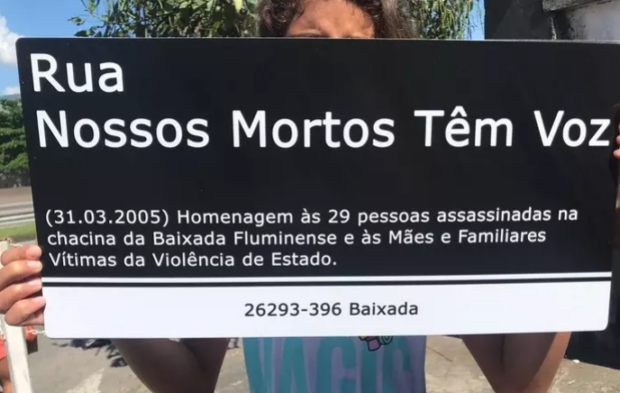 As a result, there is a confusing inconsistency between official data and the real situation. We must consider that the records originate from the reports of residents who sometimes live in the peripheral areas where the crimes occurred. To make any such reports official in these places, it is necessary to go into police stations which operate in areas controlled by off-duty policy mafias, known as militias, for example. This means exposing oneself to risk of death, as explained by sociologist José Claudio Souza Alves (author of From Barons to Extermination, a history of violence in the Baixada Fluminense), who has studied the behavior of militias for over 25 years, at a Public Hearing on Homicides and Forced Disappearances in the Baixada Fluminense in 2019.

The Baixada Fluminense is a region made up of 13 municipalities, where almost 4 million people live, according to the last census carried out by the Brazilian Institute of Geography and Statistics (IBGE), in 2010. In this group of territories, massacres and forced disappearances began with the death squads during the military dictatorship (1964-1985) and continued to unfold amongst the countless murders organized by extermination groups in the 1980s and 1990s.

In the 2000s, although there is no consensus among specialists in public security, the advent of the Pacifying Police Units (UPPs) security policy in the state capital of Rio de Janeiro caused violence to spread across the state and strengthened militia groups. In total, of the 38 UPPs installed, only one was in an area controlled by a militia, in the community of Batan, in the West Zone of Rio proper.

Massacres and forced disappearances both work at the intersection of three elements: the police deployment that make up the groups and do the killing; the financing by economic groups; and the support of the State through agents outside of the security forces who act as legislators, public administrators and members of the judiciary, and who guarantee the functioning of the group and make use of its services.

In the second half of the 2010s, the Baixada Fluminense had already established itself as a breeding ground for militia groups, set up in the region or who had divisions coming from other parts of the state, like the North and West zones of the municipality of Rio. In a little over ten years, six paramilitary groups, officially known in the region, surpassed the area controlled by drug trafficking factions. Militia groups expanded three times faster than the factions created by civilians which established the drug trade in the state of Rio over the past 35 years.

Below, we list the 12 massacres mapped by Fórum Grita Baixada, a social movement made up of civil society organizations and individuals drawn together in support of human rights, justice and citizen public security initiatives in the Baixada Fluminense:

Massacre in Guapimirim, April 3, 2016. Four people were killed close to Praça Sapê, in Belford Roxo. Ravel Plácido de Paula Simões, 19, was arrested as a suspect of committing the crime. He already had a record for bodily injury without intent, caused by a car accident, for threats and for setting fire to a house, which allegedly belonged to one of the victims of the massacre. The motives for the crime were not uncovered.

Massacre in Paracambi, March 31 2017. Four people were killed on the banks of Rio Lages. The victims were reportedly drug users and were allegedly killed by an extermination group active in the region. The same group was allegedly also responsible for killing four other drug users in an abandoned house in the Chacrinha neighborhood in Japeri, in September 2012.

Massacre in Nova Iguaçu, April 9, 2018. Four people were killed in the Luz neighborhood in Nova Iguaçu. According to witnesses, the victims had been committing small thefts on one of the access roads to Via Light, a highway which cuts through the region. Those responsible for the crime were not identified.

Massacre in Duque de Caxias, April 28, 2018. Five people were shot dead leaving a funk party on Praça Governador Paulo Torres, in the Vila Operária neighborhood in Duque de Caxias. Witnesses said that hooded men went past shooting in the direction of the victims, two women and three men, who were in a trailer.

Massacre in Nova Iguaçu, April 13, 2019. Nine people were killed within a few hours in different Nova Iguaçu neighborhoods. The majority of the victims were hit in the head. The bodies of three men and one woman were found on Estrada de Adrianópolis; another four on Estrada Carlos Sampaio and another on Estrada da Limeira. Eight of the victims were from Morro São Simão, where rival factions were fighting for control of drug trafficking in the community.

Massacres in Miguel Couto, Nova Iguaçu. On September 28 2019, three men were found dead in the garage of a bus company in the Miguel Couto neighborhood. A little over a month later, on November 1, another four young people, between ages 20 and 23, were also shot dead. The crime occurred two kilometers from the location of the first massacre. On April 23 2020, another three people were executed. According to witnesses, men went past in a car firing at the victims. It is suspected that all the crimes were committed by the same militia.

Massacre in Belford Roxo, June 29, 2019. Shots fired at regulars in a bar in the Vila Daguimar neighborhood left four dead and 13 injured. The target was allegedly a local militiaman.

Massacre in Nova Iguaçu, October 14 2020. A Civil Police operation to try to arrest militiamen who were reportedly gathered in the region known as KM 32 ended with five suspects dead. According to the Civil Police Secretariat, the action was one of the initiatives of the task force set up by the corporation to combat militias in the Baixada Fluminense.

Massacre in Itaguaí, October 16, 2020. The police killed 12 suspects in a confrontation with a militia. The group was in a convoy that was intercepted on Rodovia Rio-Santos, near Itaguaí, by a task force set up to guarantee security during the elections in the state of Rio. Among the dead was former military police officer Carlos Eduardo Benevides Gomes, aka Cabo Benê, one of the state’s most wanted men and said by the police to be one of the heads of the militia in Itaguaí at the time.

Massacre in Mesquita, May 3, 2021. An attack in a bar left five people dead and another three injured on Travessa Marina in the Jacutinga neighborhood in Mesquita. According to witnesses, those responsible went past in a car firing with pistols and rifles at the victims. 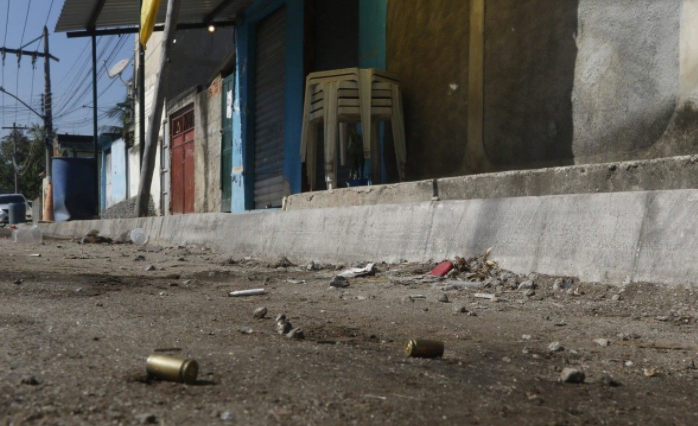