Cuts in technical support, delayed stipends, and lack of supplies: these are some of the complaints made by workers of the Hortas Cariocas program, a community gardening program coordinated by Rio de Janeiro’s Municipal Environmental Secretariat (SMAC). Problems started in February of this year and have caused the loss of thousands of seedlings. The alleged dismantling of the program was the target of a complaint made by the environmental NGO Baia Viva (Living Bay) to the federal and state Public Prosecutor’s offices. The complaint highlights the importance of the Hortas Cariocas program as a public policy that addresses food insecurity in the city, especially given the increasing rate of hunger among the poorest due to the pandemic.

Created in 2006, the program uses idle land in favelas and schoolyards to plant leafy greens and vegetables, using local workers for cultivation. At the moment, 49 gardens are active, of which 25 are located in schoolyards. A portion of the food produced is distributed at no cost to vulnerable families. Despite international recognition as an impactful socio-environmental policy that generates employment and guarantees food security, the program has been suffering cuts that are affecting its ability to function.

In the Dirce Teixeira Garden, located in Canal do Anil, in Rio’s West Zone, 80,000 seedlings were lost between February and May. This garden, whose main function is the cultivation of seedlings for the program’s 48 other gardens, has had no technical team for three months. According to Cláudia Fraga, who is responsible for the garden, two agricultural engineers had been supporting land management and transportation of the seedlings. However, after their contracts were up in February, the gardens were left unattended.

“We can’t transport the seedlings to the other gardens without engineers. Over 80,000 seedlings died; we had to feed them to the animals,” says Fraga, who has been working for Hortas Cariocas for five years. The seedlings, which are not suitable for human consumption, became food for chickens and turtles, as shown in the photos included in Baia Viva’s complaint to the Public Prosecutor’s Office. Besides logistical support, the technical team plays a fundamental role in the functioning of the gardens. According to Fraga, the engineers were responsible “for pest control, nursery supplies, and instructing the gardeners in plant cultivation.” 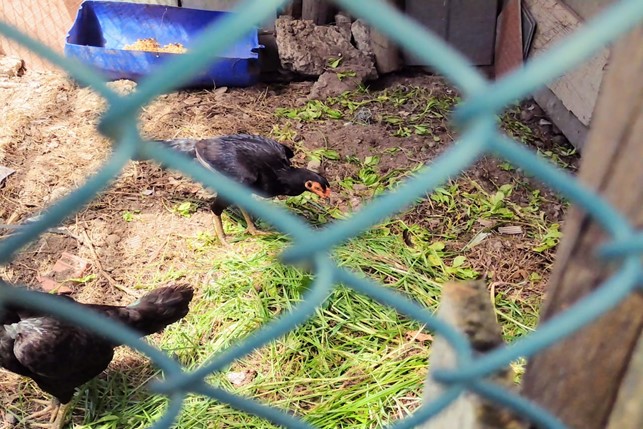 The impacts are also seen in the tilapia cultivation pilot project, which functions in the Dirce Teixeira Garden. Fish cultivation, started at the beginning of last year, is a novel activity whose objective was to strengthen food security in favelas during the pandemic. However, without the technical team, losses from the project started to multiply. “We lost over 200 fish due to lack of technical support. I feed them and clean the filters, but without instructions there’s not much we can do,” says Fraga.

In one community garden alone, in Campo Grande, also in the West Zone, around 60,000 seedlings have been lost. Although this garden does germinate seeds, it is mainly focused on growing vegetables. Approximately 500 units used to be donated by the project every month. In the last few months, without the necessary technical support, the gardeners have seen production drop. Besides the difficulty in receiving the seedlings for cultivation, keeping the soil fertile and pest-free has also been difficult. “The weather has changed; it’s now autumn and lots of pests have started to appear on our plants. We don’t use any type of pesticide, we make everything organic; the agronomists showed us how to make pepper and onion sprays, which drive away pests without contaminating the vegetables,” explains a garden worker, who prefers to remain anonymous. 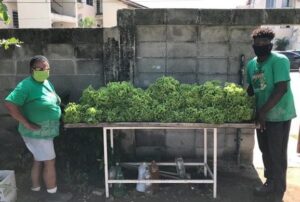 The contractual impasse for hiring technical support has gutted the community garden in the favela of São Carlos, in Estácio, Central Rio, according to one of its workers. “The soil isn’t healthy, and we don’t know what it needs. And we also haven’t received any seedlings. The garden isn’t producing anything, and the residents say they have never seen it so bare,” says the gardener, who also prefers not to be identified.

The service contract for the three agronomists, a few of the technicians, and the vehicles to transport supplies such as fertilizer and seedlings, expired in February and was not renewed. Asked to comment, the Municipal Environmental Secretariat did not mention technical support, but issued a statement saying that the expected budget for the program this year is R$1.68 million (US$324,000), “which represents 60.8% more than was invested in 2020.” However, according to the complaint filed by Baia Viva, the budget plan only includes funding for staff stipends and “does not include the technical, logistical, and administrative support so vital for the maintenance of the program’s activities.” Baia Viva emphasized that the period of this support, between 2018 and February 2021, coincided with the strong growth in the number of productive gardens as well as the various awards that prove the program’s success.

Last year, Hortas Cariocas was included in the list of actions classified as essential to reach the UN‘s Sustainable Development Goals (SDG). Since then, the project has been included in the organization’s agenda, aiming to incentivize sustainable development programs in various countries. In the preceding year (2019), Hortas Cariocas received further international recognition: an honorable mention in the category of Food Production (Urban Food Systems) at the Milan Pact conference, held in France. 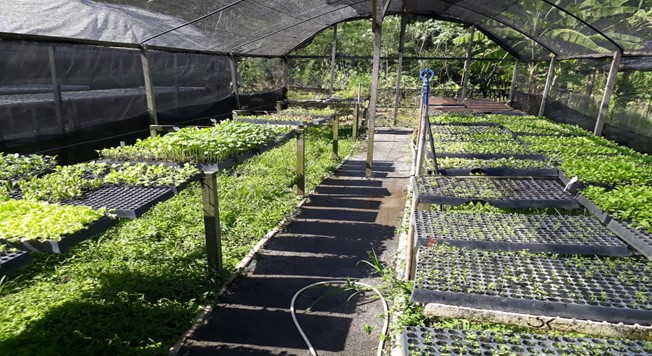 Hortas Cariocas produces around 80 tons of food annually, according to data from SMAC. Besides the production of organic food, the project also generates employment and income in the favelas. The gardeners’ stipends range between R$500 (US$96) to R$630 (US$121) per month. To increase the workers’ benefits, part of the gardens’ production is donated to them and the rest is sold by the workers themselves. The problems reported are being felt both at the dinner table and in the pocketbooks of the families involved. According to the gardeners heard for this article, the stipends paid by city government were delayed starting in February of this year: “They are a month behind with April’s payment. We were paid in March but not in April, and now it’s May,” explains the Campo Grande garden worker.

Some of the complaints made about Hortas Cariocas are also reflected in another important municipal environmental project, the Collective Reforestation Action. In March of this year, Baia Viva lodged a complaint to the federal and state Public Prosecutor’s offices about budget cuts and mass firings of program workers. The complaint emphasizes that the Reforestation Action had grown to 1000 participants, divided into teams of 15 people each, but that these levels were falling with each successive management team. At the start of 2021, there was a new staff reduction, which until then had numbered only 453 workers. According to Baia Viva, “if this mistaken decision stands, we will end up with the smallest number of reforestation personnel in decades.”

The Collective Reforestation Action program was established in the late 1980s during a time when Rio often suffered from mudslides in periods of strong rain, causing great socio-environmental impact to its hillsides and deaths in its favelas. The Reforestation Action was a pioneering initiative that hired local workers for environmental projects. The program has planted more than ten million seedlings along 3,400 hectares of hillsides and slopes in 92 of the city’s neighborhoods. The project “shows that it is possible to align reforestation with income generation for the poorest,” says Baia Viva. 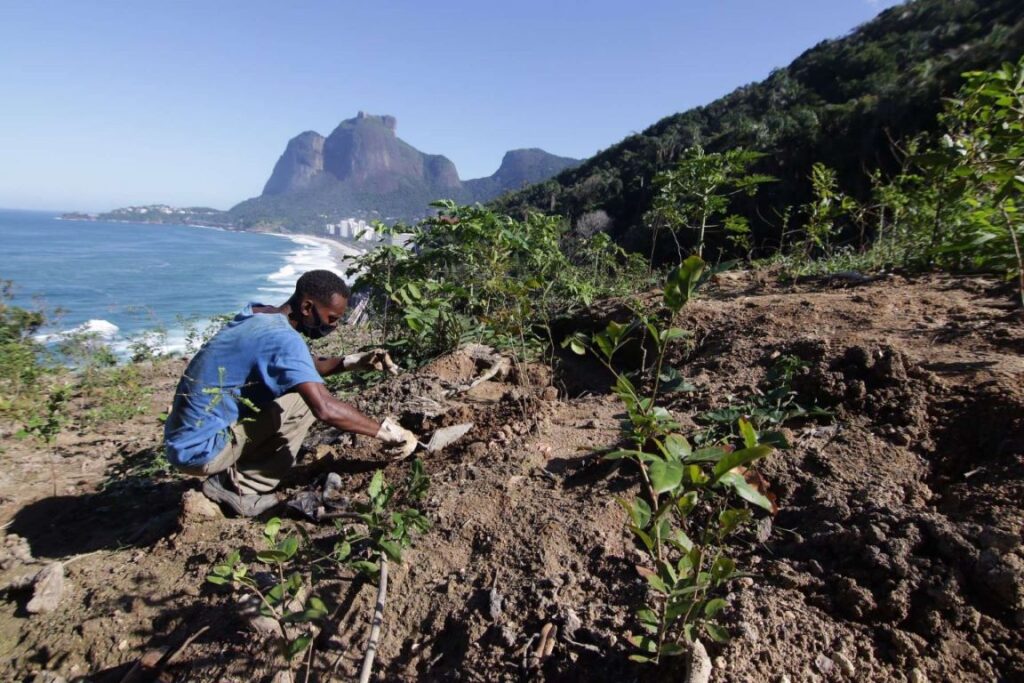 A worker who spoke with this reporter, and who asked not to be identified, says that payments of the program workers’ stipends have been late since February. In March, payments were reduced, and “they fired a lot of workers and reduced stipends by R$100 (US$19) for the workers and R$470 (US$91) for the supervisors.” The stipend paid to reforestation workers is less than a minimum wage.

The budget reduction also affected the functioning of other projects that comprise the Collective Reforestation Action program, like the mobile environmental education actions and the planting itself, as the worker explains: “The Action no longer has a trucking contract for transporting the seedlings; the engineers themselves have resorted to taking them in pickup trucks, if they have one. Without transportation, how can they take the seedlings to the reforestation areas for planting?” they ask.

Asked to comment on the complaints regarding the Hortas Cariocas and Collective Reforestation Action programs, the Municipal Environmental Secretariat reinforced the importance of the programs to the current administration’s environmental policy. In a statement, they wrote, “the Hortas Cariocas program is consolidated. The current city administration plans to invest R$1.68 million (US$324,000) in 2021, which represents 50.8% more than was invested in 2020. The budget transfers in the first quarter surpassed those of the same period last year. There is a clear directive to take natural resources to the areas that need them the most.” Regarding the Collective Reforestation Action, SMAC said that “the technical team of forest engineers in the Municipal Environmental Secretariat has a plan that assures the Secretariat’s action in the nearly 4000 hectares of reclaimed area in the city.”