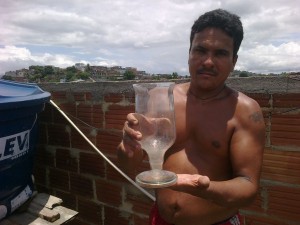 Climbing one of the many slopes of Morro da Pedreira in Costa Barros in Rio de Janeiro’s North Zone, you might not guess you’d find a father up here with a great talent for folk art and a passion for recycling and the environment. The material this man has chosen for his beautiful work is glass.

Often carelessly thrown away, glass becomes one of the villains in this season’s all-too-common flooding. Glass takes hundreds of years to biodegrade, which is why it is commonly recycled, or at least should be.

The artist Alex Sandro, or “Cabeludo” as he’s known in the community (‘hairy,’ despite having cut his hair), transforms bottles of all shapes and sizes into cups, glasses, and boxes. People in the community help him collect the material for his work. “I go around and people give me bottles they’ve set aside for me,” he says. When he doesn’t get enough that way, he goes out and picks up bottles in the street. 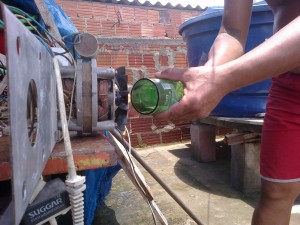 We know that today the solution to our garbage problem is tied directly to what the product represents, and it is with this in mind that he believes in reusing objects and in the success of his products. “Store-bought glasses or cups can cost twice as much as the ones I make, but they still don’t mean as much as mine do to the people who buy them. If someone breaks a normal glass, she says, ‘Oh well’ and later she can go buy another one somewhere. But if she breaks a glass that was handmade especially for her, I’m sure she’ll miss it. Every cup or glass I make is full of feeling.”

A general services assistant in downtown Rio de Janeiro, this hard-working man came to recycling as a way to supplement the family income. “I was unemployed for four years. During that time I took care of the house and had my family making and selling cups and glasses.” Today his oldest child helps him. Alec Sander, 11 years old, is an intelligent boy who already knows the tricks of working with his father. “I learn fast. I help my dad. I wash the bottles and set them out to dry, and I spread the glue. The only thing I don’t do is the cutting because it’s very dangerous,” said the boy. 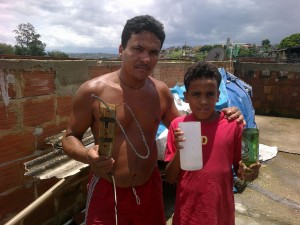 Alex says he was approached by people from a university who wanted to take him to São Paulo to develop his work into a social project. However, he felt that the timing was wrong. “I wasn’t sure. I didn’t want to leave my family here. My son was very young and I couldn’t leave them.” Today he wants to teach what he has learned to youth in the community and show them it’s possible to make some extra money and also contribute to a cleaner, healthier world. “There is still a lack of public sector interest. They talk about sustainability and preservation, but they don’t invest in small projects. Here in my house I can contribute on a small scale. Imagine if I had better equipment and more space. The young people want to learn, and we want to teach, but the investment doesn’t materialize,” he concludes.

As he mentioned, Alex’s equipment is limited, and everything is truly handmade. To cut the bottles he uses an electric shower resistor attached to a piece of wood plugged into an electrical outlet. One flip of the switch, and before long the piece takes shape. Another curiosity is his homemade sander – a washing machine motor, responsible for eliminating the danger of cutting one’s lips on the edge of a glass. His target customer can be found just about anywhere. He sells to bars, to bar patrons, to people in the community. But his best days — or nights — are at the community funk dances. “At the dance everybody knows me and buys from me, mostly because I sell my work at a decent price, and people want to drink from a special glass.” Prices range from R$2 to R$20 depending on the size of the piece, the work involved, and the rarity of the bottle used. 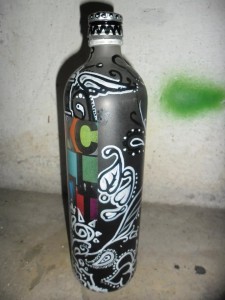 Walter Vinicius, or Tim, from the Lagartixa community in Costa Barros, is another artist making a name for himself in bottles. A talented graffiti artist, bottles have given him a new way to express himself. He has adapted the art he developed on city walls to use on beverage and olive oil bottles. He works with spray paint and adds details with permanent markers that don’t wash off. Tim speaks of the importance of his work. “People usually think of these bottles as trash, but I try to find another solution for them. Besides making some money for myself, I’m reducing the impact on nature.” He describes how he finds his customers. “My friends bring me full bottles. I paint them and give them back so they can put them in their houses and help spread the word. A lot of times people want personalized bottles to give as presents.”

In a nearby junkyard, a used bottle goes for about R$0.15. At that price, both artists could afford to buy their bottles, but they don’t do it that way. They prefer to rely on their neighbors’ contributions and a growing awareness of environmental preservation and reuse. They are concerned artists and micro-businessmen who have discovered that people are throwing away sustainable income.