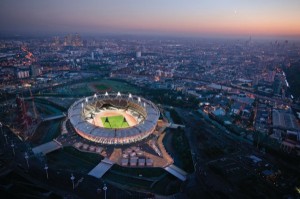 Last year’s London Olympics is widely viewed as a success. From Danny Boyle’s spectacular opening and closing ceremonies to the smooth organizational running of the Games, the event seemed to represent a model hosting of an international mega-event and, despite the British public’s complaints of overspending and questioning of value in the run up to the Games, the country was swept by a wave of national pride as the Games came and went.

But what of the Olympics’ local impacts and long term legacy in East London, the main site of the 2012 Games and the Olympic Park?

The East End of London has historically been the poorest part of the city. In the 19th century, London’s population grew rapidly and the east of the capital became characterized by a concentration of the urban poor and immigrants that led to overcrowding and the creation of slums. The Docks on the River Thames and related industries such as ship-building dominated the economy and were major employers in the area at this time, the height of the British Empire with commodities arriving from colonies all around the world. The gritty, industrial character of East London prevailed long after the fall of the British Empire and the Docks’ decline in the second half of 20th century, with the area continuing to be one of the poorest areas of the country, home to a diverse mix of immigrant and white British communities.

The image of the East End as synonymous with poverty and squalor has been exploited by developers in recent years to implement aggressive urban development projects by private companies, starting with Canary Wharf in the 1980s. For many commentators and local activists, the Olympics is the latest and greatest property development opportunity in a process of gentrification that is redesigning the East End, driving out the area’s traditional populations. 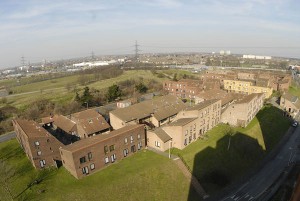 Julian Cheyne, 65, has been a resident of East London for 25 years. For 19 years he lived on the Clays Lane housing estate, before being displaced in 2007 to make way for the Olympic Park. Clays Lane was purposely built to house vulnerable single people in a range of flats, shared houses and bungalows and formerly operated as a cooperative. A total of 425 Clays Lane residents were moved out of the 2.5km area that is now the Queen Elizabeth Olympic Park, along with another housing estate, two traveller communities and the area’s industrial businesses.

Having been active in following the entire Olympic process in East London from pre-bid negotiations to present, writing about and protesting against the developments that expel and marginalise local people, Julian’s conclusion is that on a local level the Olympics is an exercise in property development that displaces poor people and industry from valuable land. 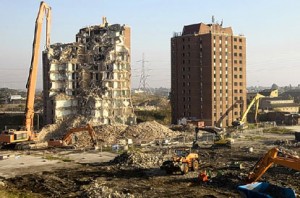 Looking out over the Olympic Park, where his former community lay, he says: “Gentrification is happening in East London, it’s not just down to the Olympics. But the Olympics is a particular kind of process because you grab a large piece of land at a knocked down price and you set up a planning authority which takes control of that.” He goes on: “The Olympics is about finding partners in the property industry and thinking ahead.”

The planning authority for the Olympic and surrounding areas in East London is the London Legacy Development Corporation. The LLDC was created in April 2012 under the Localism Act 2011, and has complete planning authority over the area, overriding the traditional planning powers of the local borough councils. The Corporation’s Planning Decisions Committee is chaired by Phillip Lewis, Chief Executive of the property division of Kirsh Group, an investment company, and is largely comprised of property industry executives. 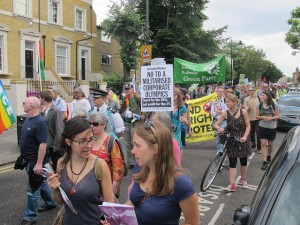 The LLDC’s stated aim is the regeneration of this area in East London. Regeneration, a term coined during the 1980s is predicated on the Thatcherite economic concept that investing wealth in an area will ‘trickle down’ to the poorer parts where it is most needed. Anna Minton, in her 2011 book Ground Control: Fear & Happiness in the 21st Century, argues that this is a fallacy and that the vast retail malls, private office spaces and gated condominiums created under the untested urban planning authorities in the UK so far have only served to cement social and economic divisions: “Trickle down hasn’t worked in any of the places I visit where the same model of economic growth based on increasing property value has been rolled out. Yet this model endures because of the high rates of growth it brings in good times, even if the benefits are very unevenly spread, entrenching enclaves of poverty as well as wealth.”

The Olympics, which present an enormous opportunity for redevelopment of a large area, is a primary vehicle for this kind of model, whereby poor people are driven out or displaced. A report published in 2007 by the UN-funded Centre for Housing Rights and Evictions (COHRE) concluded that, between 1988 and 2008, the Olympics have displaced more than two million people around the world and is one of the major causes of real estate inflation.

In an article for Cease Magazine in April 2012, economic geographer Ashok Kumar argued that this is the real reason cities bid to host the Olympics, saying “Any reading of Olympic history reveals the true motives of each host city. It is the necessity to shock, to fast track the dispossession of the poor and marginalised as part of the larger machinations of capital accumulation. The architects of this plan need a spectacular show; a hegemonic device to reconfigure the rights, spatial relations and self-determination of the city’s working class, to reconstitute for whom and for what purpose the city exists. Unlike any other event, the Olympics provide just that kind of opportunity.” 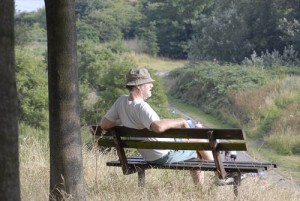 Julian, who now lives in subsidised housing in another part of East London and continues his activism on the impacts of Olympic development in London, echoes this view: “Change happens, but to what extent does it happen to the benefit of local people, to people who live there already? By and large poor people, the least able to retain control of the areas where they live?… Places that are valuable and occupied by poor people get bought up and poor people move out to less salubrious parts of town.”

Looking at London, and indeed Beijing, Barcelona and Atlanta, it is impossible to feel secure about Rio’s own hosting of the Games not replicating the same model of displacement and marginalization, especially given the Rio authorities’ record of interactions with its poor. With it revealed that 75% of Rio’s Olympic Park will be sold to developers after the Games, and the authorities’ insistence on the removal of Vila Autódromo and dozens of other communities across the city, it appears Rio is set not only to repeat its own past mistakes, but those of all recent Olympic cities.