On December 12, 2012, a meeting took place in the park’s Pau-da-Fome head office with the Advisory Council of the PEPB and representatives of the State Institute for the Environment (INEA). The agenda, focused on the Park’s Management Plan, was presented by the administrator of the State Park, Alexandre Predoso.

The meeting was attended by officials of INEA, researchers of the Federal University of Rio de Janeiro (UFRJ), a lawyer representing Pastoral das Favelas, residents of the park, and Council members, of which some members are also residents of communities located in or around the park. This is the case for William Hadid, a biologist living in the park and a representative of Agrovargem; Maraci Soares, member of the Alto Camorim Residents’ Association; farmer and resident of Monte da Paz community José Antônio, who is also vice-president of the Farmers and Breeders’ Association of Jacarepaguá.

According to the park’s administrator, the PEPB’s Management Plan has been finalized. In it is specified that residence in the park will not be permitted, and that the socio-economic registration of the current residents for relocation would begin in January 2013. This statement goes against everything the Council has been developing regarding the land regularization of traditional people living in the area even before the park was established in 1974, and all the people currently living in farmer communities in the area.

The question is a very complex one, since the area is very extensive and there are a great variety of housing situations within the area of the park: luxury condominiums, recent settlements, farmers’ communities from traditional cultures, cooperatives of agriculturists with organic plantations, and urban communities. The estimate is that 5000 homes might be removed from the park.

The position of the park’s Advisory Council on the Management Plan is presented in a document composed after the Council’s last meeting in June 2012, as argued by lawyer Evandro Satlher (2010). Satlher argues that the creation of a Conservation Unit (UC) without proper evaluation of the most adequate protection measures according to current uses, or without addressing the land regularization question, generates what the lawyer terms ‘subjective deterritorialization:’ what happens when the residents of a Conservation Unit find themselves all of a sudden in a situation of legal uncertainty, because in spite of not being removed, their territoriality will be denied, and they will start experiencing increased obstacles in realizing certain activities and uses of space.

Regarding the land question in the park, the Council members advocate that the procedures should be guided by the principle of support to the families that have been living in the interior of the park for many decades, relying on family farming for a living, and who have also been preserving the green areas over the years.

Among the reasons that support this argument is the State Law 2.393 from April 20, 1995, which “authorizes the executive power to assure native communities residing in Conservation Units of the State of Rio de Janeiro for more than 50 years the right to use the occupied areas, as long as they depend, for their livelihood, directly and primarily on the preserved local ecosystems, the essential attributes of such ecosystems, and when fulfilled the requirements of this Law (Art. 1º from Law 2.393/1995)”.

However, during the last meeting on December 12, the PEPB’s administrator asserted that the Management Plan was already finalized, pointing to the removal of the park’s residents. This goes against the document written by Council members in June of the same year, during the process of elaboration of the Management Plan that all Council members considered to be happening in a participatory manner.

Annelise Fernandez, sociologist and professor at the Federal University of Rio de Janeiro (UFRJ), and Secretary of the Advisory Council, argues in relation to the Council’s and the communities’ participation in the development of the Management Plan, that: “In formal terms, participation is made viable through the Council’s meeting, in workshops on the Management Plan, and in the possibilities offered to revise the document. In practice however, this does not work, because the counselors are not consulted (but merely informed) about decisive processes. They know nothing about the actions of INEA, which involve the fate of these people, making representatives (residents and counselors) feel rendered in front of their communities. We still have not had access to the finalized Management Plan, after the last modification request.”

“Although the existence of laws guaranteeing the right of native and traditional people in Conservation Units – and the need to study these groups – is mentioned in the document (Management Plan), the use of the phrase ‘all residents will be removed, in January we will start with the socio-economic registration of these people’ suggests that these conditions will not be respected,” Annelise highlights. “In a document elaborated by the Advisory Council, the need is pointed out to form an intersectoral Working Group between the municipality’s secretariats, INEA, counselors, and members of the affected communities. Also, any measure should be subjected to wide distribution and monitoring by society and Council,” Annelise finalizes. 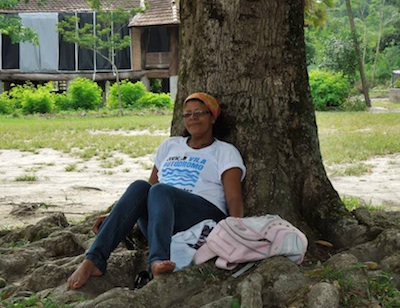 Maraci Soares, a counselor present at the meeting on the 12th, resides in Alto Camorim, a community that has been fighting to obtain the title of Quilombola. Maraci expressed her outrage during the meeting when she heard that it is stated in the Management Plan that settlement will not be allowed in the park. The community of Alto Camorim is an expressive example of traditional communities in the area of the PEPB. Maraci explains that “the community of Alto Camorim has been here for more than 100 years, because my cousin Moacir Francisco de Azevedo, who still lives here today and is 89 years old, was born in the community. His father Caetano, whose name appears in the 1936 book Sertão Carioca by Armando Magalhães Corrêa, worked for Vitória de Sá, who was the owner of these lands from Camorim to Vargem Grande.”

Today, the Alto Camorim consists of 200 houses and has approximately 1000 inhabitants, with many of them relying on family farming for their livelihood. But these families’ peace has become a constant preoccupation due to these latest eviction threats.