It is hard to contain water flowing downwards, smoke rising, and the tourist invasion of pacified favelas. Something must be done to prevent the positivity of the moment from turning into “communities just for show.” The pacified favelas have become targeted by a consumer’s lust seldom seen in Rio de Janeiro. From the moment the Pacifying Police Units (UPPs) installed themselves, in some favelas it is like a new sarcophagus of Tutankamon, the Egyptian pharaoh, has been discovered. A legion of tourists, researchers, business men, and marketers ‘discovered’ the favelas.

During its almost 80 years of existence, Santa Marta, the first favela to have a UPP, has always received foreign visitors, most of the times in a very discrete manner. In some cases the visitors were notable: Queen Elizabeth, Senator Kennedy, Gilberto Gil. Even Michael Jackson did not allow media presence when he shot his video clip in the favela. In 2008 (with the arrival of the UPP) came the era of celebrities and displaying the favela to the world. 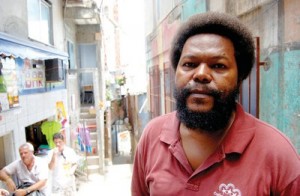 However, some questions need to be posed and answered as the government plans to continue investing in this approach: what exactly is a favela prepared to receive tourists? What ‘make-up’ is needed in order to make the tourist feel safe? What kinds of products do tourists want to find there? If the hill is not private property, if there is no owner, each and every resident has the right to an opinion on what is happening to their place of residence.

These and other questions should guide the debate among residents themselves, and between residents and public officials, as proposals are being elaborated to stimulate tourism in the pacified favelas. If residents do not organize themselves and take on leadership in the touristic and entertainment actions in Santa Marta, we will see the natives (those from inside the favela) serving as guinea pigs for ventures and initiatives from outsiders, at the expense of a local identity that will slowly lose its characteristics.

Perhaps we should adhere to the principles of community tourism: integrity of local identities, leadership and autonomy for the residents, which might help us find strategies to receive those from outside without succumbing to the violent rules of market tourism.

Itamar Silva is President of Grupo Eco – Santa Marta, director of the Brazilian Institute of Social and Economic Analysis (iBase), and an Ashoka Fellow