For original article in Portuguese in Vidiga! click here.

Victims of the greed generated by the pacification of Vidigal, the Institute Todos na Luta (All in the Fight), responsible for the training of young athletes in boxing, had to abandon the important position it has held in the community for over 20 years. Now, it is a race against time to raise funds and renovate the new space, in order to resume their activities, which have been suspended since December.

In mid 2011, everything was going fairly well for the Institute. After 20 years in the community, Raff Giglio officially founded the organization, which teaches boxing, citizenship and culture in Vidigal. Seven of these years had been dedicated strictly to social work. The institute had sponsors, and they had access to an excellent space, located at the bottom of the Costa Azul condominium. One detail that drew the attention of anyone visiting the Institute, as with much of Vidigal, was the incredible ocean view out over Niemeyer Avenue.

However, luck ran out for the group in November of that year, when Vidigal was pacified. With police presence came real estate speculation. Soon, Raff and his students were asked to leave the building. Even with the rent paid religiously and on time, other plans were being made for this space.

A court settlement allowed them to remain there until December 2012. However, at that point, apart from losing their headquarters, they also lost their sponsor who refused to renew the contract with the organization.

While searching for a new location, classes continued to be taught. It was not easy to find a property available in Vidigal, let alone one big enough. In the end, the most appropriate place was a large warehouse, in bad shape, but with the potential to house the group.

With a solid boxing career, strong character references and professionalism, Raff gave up his private boxing school in 2004 in order to teach the residents of Vidigal. At the same time, he was responsible for discovering and training the Olympic medalist Esquiva Falcão, who received a silver medal in the London Olympics. He brought him to Rio, paid for his travels, housed him at the academy and supplied his food for a year, until he went on to São Paulo. Raff was rewarded for the love he showed to Falcão and his brother, Yamaguchi Falcão, another medalist. Upon returning from the Olympics, the two brothers passed through Vidigal, after visiting Brasilia and being greeted by President Dilma, even before going to see their parents in Espírito Santo State.

Classes stop
With an intense schedule of activities, which included everything from lessons for beginners, to the creation of a High Performance team with a focus on the Olympics, the activity of the Institute was not simply limited to 100 children and young adults that attended. Rather, participation extended to the families who received, in addition to basic staples food baskets, regular visits from a social worker and invitations to participate in the Institute’s various events.

All this has now stopped, as the Institute searches for the funds necessary to renovate the new headquarters, whose rent is currently being paid by actor Malvino Salvador. He has been training for 5 years with Raff.  This is another important characteristic of the Institute “Todos na Luta.” They also provide boxing training specifically designed for actors who are learning the sport and experience for their movie roles. This was the case for actors Malvino, de Eriberto Leão and Thiago Rodrigues who prepared and trained for 6 months to act as the brothers, Ulysses and Zenon, in ‘War of the Sexes.’

Art and fight
The many actors involved in this boxing gym set the tone for how things work there: two-hour classes, one for training, the other for learning citizenship and culture. The kids watched videos, created recycling workshops and discussed important topics such as drug use.

On special occasions, directors with a recognized talent, such as Selton Mello, arrived to participate in debates with the students.

Contributions
The activities of “Todas na Luta” remain inactive until they can raise at least a portion of the R$240,000 required to renovate their new working space. The roof must be redone and the inside made livable, at least enough to set up the boxing ring and allow the High Performance athletes to resume training, which cannot stop. 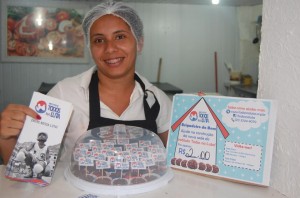 To raise the money, they literally got their hands dirty by making brigadeiros. They are selling the sweet at the local market, so there is at least some income being generated. Other contributions are welcome by making donations on the Institute’s website.

Here’s how you can help:

-Make donations through the site

Check out these videos presenting the Institute on SporTV and the Institue being supported by Malvino Salvador: