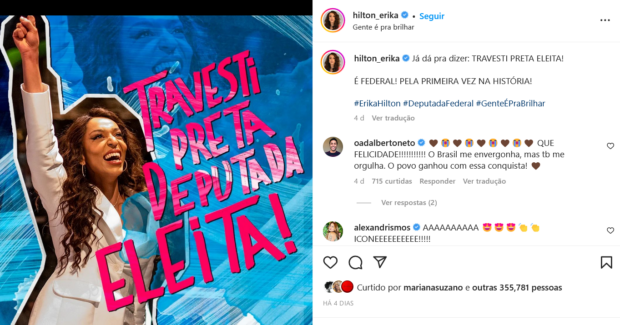 While the elections for executive roles—governor and president—take place in two rounds, elections for state deputies, federal deputies and senators take place in round one. This is why the result of the first round defines the face of politics in Brazil.

If on the one hand, the new Congress elected on October 2 reflects a flash flood by the far right, on the other hand, the entry of diverse candidates representing numerous causes and social movements represent the seeds that have spread and sprouted as a consequence.

The 2022 elections also opened prospects for other trans women who, despite not being elected, gained prominence and received votes indicative of their popularity. Robeyoncé Lima (Socialism and Liberty Party in Pernambuco, PSOL-PE), currently a city councilwoman in Recife, is an example. Despite being the fourth most voted candidate in the capital of Pernambuco, with over 80,000 votes, she was not elected, due to an electoral quota. This was because her party coalition did not obtain the minimum number of votes required to guarantee her a seat in the House of Representatives. Besides her, Benny Briolly (Socialism and Liberty Party in Rio de Janeiro, PSOL-RJ), currently a councilwoman in Niterói, ended up 329 votes away from a seat in the Rio de Janeiro Legislative Assembly (ALERJ).

Guilherme Boulos (PSOL-SP), national coordinator of the Homeless Workers’ Movement (MTST), was elected with 1,001,453 votes, making him the federal deputy with the most votes in São Paulo. He exceeded Eduardo Bolsonaro (Liberal Party, PL), son of President Jair Bolsonaro, by 259,752 votes in the race for federal deputy in the state of São Paulo—the largest electoral college in the country with 34,667,793 eligible voters.

Moreover, the Socialism and Liberty Party (PSOL), which includes Erika Hilton, Briolly, Petrone, Boulos and was home to assassinated councillor and human rights activist Marielle Franco, increased in size from eight to twelve elected federal deputies. The bench of the PSOL-Rede federation gained the biggest proportional increase in the National Congress, growing by 40%, from a bench of 10 deputies to 14 (12 from PSOL and 2 from Rede).

Another instigating change is that, after an unprecedented mobilization in the 2022 elections, the National Congress will have five indigenous people elected by popular vote: Célia Xakriabá (Socialism and Liberty Party in Minas Gerais, PSOL-MG), Juliana Cardoso (Workers’ Party in São Paulo, PT-SP), Paulo Guedes (Workers’ Party in Minas Gerais, PT-MG), Silvia Waiãpi (Liberal Party in Amapá, PL-AP), and Sônia Guajajara (PSOL-SP). It is the largest number in the history of Brazil. Only two indigenous parliamentarians had been elected previously: Mário Juruna (Democratic Labor Party in Rio de Janeiro, PDT-RJ), in 1982, and Joênia Wapichana (Sustainability Network Party in Roraima, Rede-RR), in 2018. However, Wapichana was not reelected in 2022.

The indigenous candidates who ran in the 2022 elections were driven in part by the activism of indigenous people and organizations, such as the Articulation of Indigenous Peoples of Brazil (APIB). There were twelve candidates for federal deputy and 18 for state deputy, across 20 different states.

Sonia Guajajara (PSOL-SP), coordinator of APIB, and Célia Xakriabá (PSOL-MG) are two of the indigenous people that were elected. Both being progressive candidates, they won due to a campaign focused on the fight against illegal mining, for the preservation of indigenous culture and the environment.

The priority of these two future parliamentarians will be to fight against projects such as the regulation of land exploitation on indigenous lands and the “time frame” thesis—which considers indigenous territories only those that were occupied when the Constitution was ratified, on October 5, 1988.

The Landless Rural Workers Movement (MST) also made history in the 2022 elections. In total, the MST nominated 15 candidates of its own, running for state and federal deputy in 12 Brazilian states. Two candidates were elected to the National Congress: Valmir Assunção (Workers’ Party in Bahia, PT-BA) and Marcon (Workers’ Party in Rio Grande do Sul, PT-RS), and four state deputies to the legislative houses of Pernambuco, Ceará, Rio de Janeiro and Rio Grande do Sul.

The Black Coalition for Rights, which promoted the Quilombo in the Parliaments project, elected 26 candidates among federal and state deputies. Over 120 candidates involved in the project, across 24 states, gained a total of 4,223,028 votes.

However, this number was nowhere near Quilombo in the Parliaments’ goal of increasing the number of black elected officials in Congress committed to the anti-racist agenda. The drastic underrepresentation of black people in the National Congress has been maintained in this election.

In total, eight black candidates were elected as federal deputies. Among them were Benedita da Silva (Workers’ Party in Rio de Janeiro, PT-RJ), who is from a favela, Henrique Vieira (PSOL-RJ)—an evangelical pastor not aligned with Bolsonarism—and Erika Hilton (PSOL-SP), alongside 18 state deputies and 97 other candidates who are next in line should a replacement be needed.

The Workers’ Party (PT) bench—the party of former president and current presidential candidate Lula—also had successes. The number of elected parliamentarians increased from 56 to 80. Moreover, the number of women in the Federal Chamber of Deputies also increased with 18 elected deputies. Among them was Juliana Cardoso. Born and raised in the East Zone, on the outskirts of the city of São Paulo, she is the first indigenous woman in the party’s history to be elected.

The composition of the new Congress and Senate shows how the ideological contest between Lulism, Bolsonarism, anti-PT and anti-Bolsonarism agendas is not solely reduced to the presidential battle. There was hope of electing a more diverse Congress committed to an agenda of social justice, human rights, environmental conservation, and anti-racism. It may appear as though this did not happen when we look at the composition of the elected parliament, with the Liberal Party (PL), President Bolsonaro’s party, now the largest party in Congress with a bench of 99 federal deputies and 8 senators (of the 27 elected in the 2022 elections). However, for those who seek a more compassionate, representative, fair and fraternal Brazil, it is undeniable that the elected officials presented in this article bring a glimmer of hope.