The photographic essay “Vila Autódromo, Fragments of Life,” created by photographer JV Santos in partnership with the group Enter Without Knocking, is the product of a course at the School of Popular Photography, created by the documentary photographer João Roberto Ripper with the support of the Favela Observatory. This is an excerpt from the memoirs of a family that lives in Vila Autódromo. At this very moment the community is suffering tremendous pressure from City authorities to accept the public housing that is being built “for them” to move to in early 2014, though the majority of residents has consistently been against resettlement, the community holds collective title, and the Olympic project does not require or plan on the use of their land. This is the story of the Santos Rocha “Flamily,” Seu Carlos and Dona Evanilde.

They have known each other for 20 years. At that time Carlos da Silva Rocha was a fisherman. “I don’t even remember the day, time or precise moment. I know that I said to a friend of ours: I like that blonde girl over there, I want to get to know her, and that was that (he laughs),” Seu Carlos remembers what he can. Maria Evanilde Lopes dos Santos came to Rio when she was 10 years old. “My mother was the first to leave Ceará for Rio de Janeiro. Gradually she called for the children to be sent,” says “Xuxa,” as she is known by her neighbours. 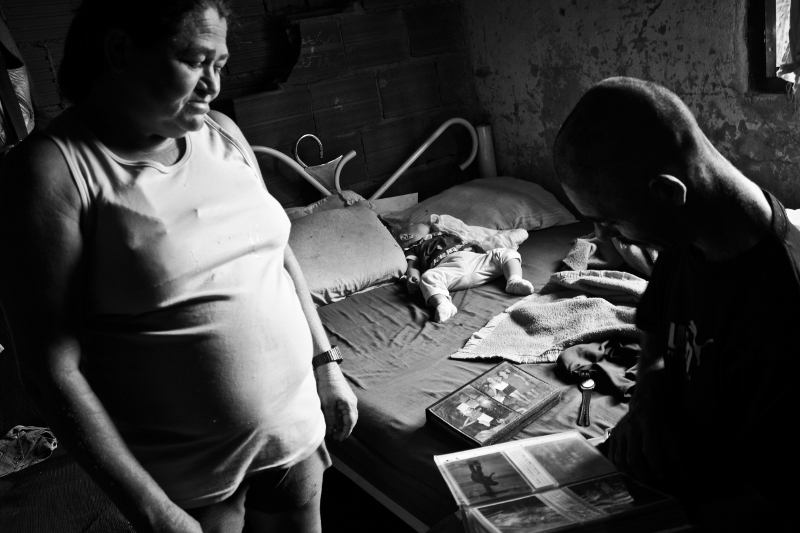 Dona Evanilde remembers how difficult life was when she met Seu Carlos. “When I met Carlos, he got me pregnant but had nowhere to take me. So we lived in the old Fishing Village. That was the first time we were evicted. I was 7 to 8 months pregnant with Fabricia, and Eduardo Paes (now Mayor) wanted to flatten our shack with me inside?! Ah I said I would not leave my house!” Evanilde recounts with outrage. Seu Carlos remembers sadly, “She was pregnant with our first child and he ordered the guy to throw the machine right on top of her.” 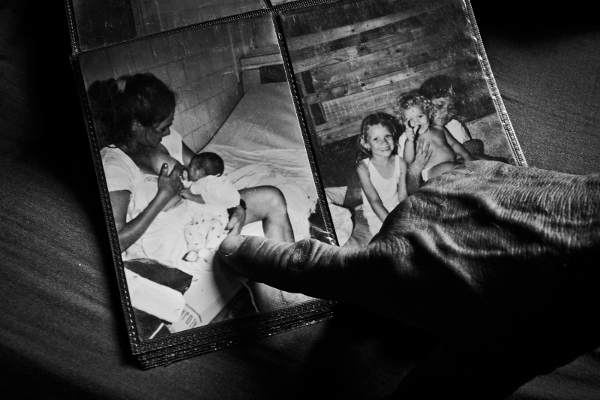 Despite all this they continued building their family and fighting for the right to housing. “A neighbour told me that this lot here in Vila Autódromo had been abandoned for a long time, so I decided to occupy it. That was almost 20 years ago now,” remembers the warrior Evanilde. The family was growing. “She already had one daughter from another relationship, Fabiana. As we both were obsessed with Flamengo (football club) we decided to always choose names beginning with ‘F.’ So after came Fabrícia, Fabiano, Fábio, Fabíola, Franciele, Fágner and Franciele,” Seu Carlos says proudly. The birth of Franciele is yet another memory of struggle for this family. “Franciele was born in my hands, in front of Curicica Hospital. Evanilde said the baby was coming, but the nurses didn’t have room. She couldn’t take it any longer so I said: take off your panties and let it be born. It was just a matter of taking them off and the girl was born. I even had to unwind the umbilical chord which was wrapped around the child’s neck three times,” that’s how Seu Carlos describes it, not wanting to be reminded of the death of his son Fagner, victim of a urinary tract infection, caused by an error in a medical unit in the same hospital. 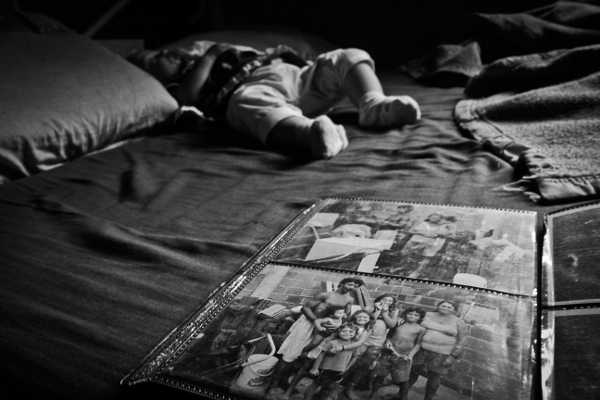 Faced with so many battles, Dona Evanilde, who like her husband works collecting recyclable material to support the family, felt victorious about having a place to live: “Here, even though the work on the house isn’t finished, the house is mine. In another place I wouldn’t be able to do the work on the house, collect scrap metal, and live my normal life.” 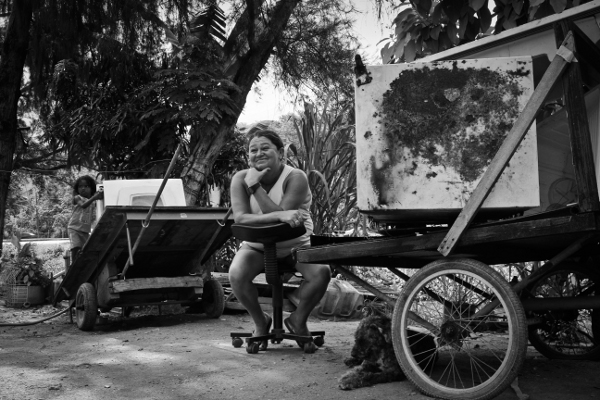 Today their grandchild is the centre of happiness in the house. “Aline is a victory, after many fits and starts. She is the love of our lives,” says the triumphant Evanilde. 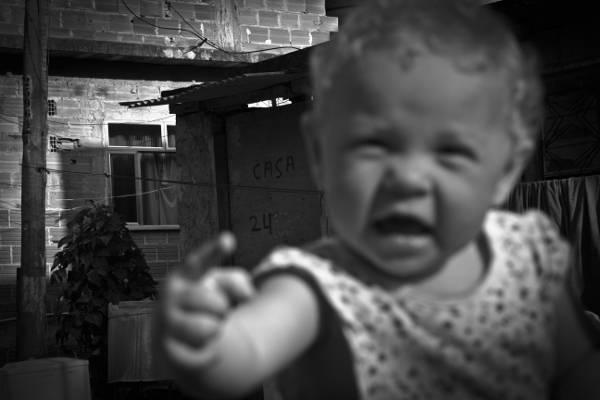 This is the story of the Santos Rocha family, but it could be that of many others, one of the approximately 8,000 families who are going to lose their houses, memories and emotional ties to their neighbourhoods and places where they live in the name of Rio de Janeiro’s preparations for the 2014 World Cup and 2016 Olympic Games. 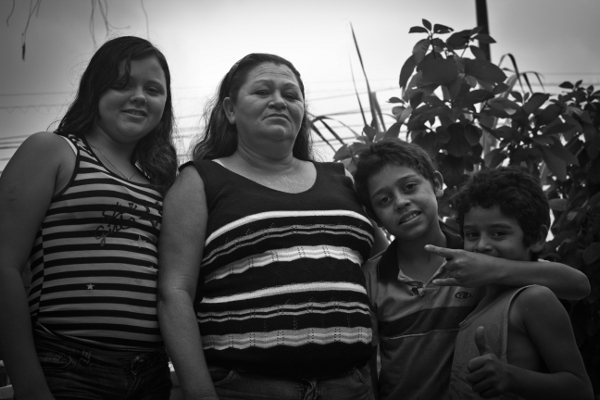 Seu Carlos cuts his hair in front of the house. 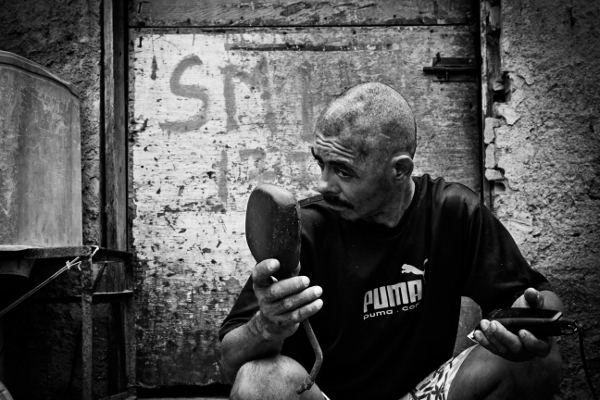 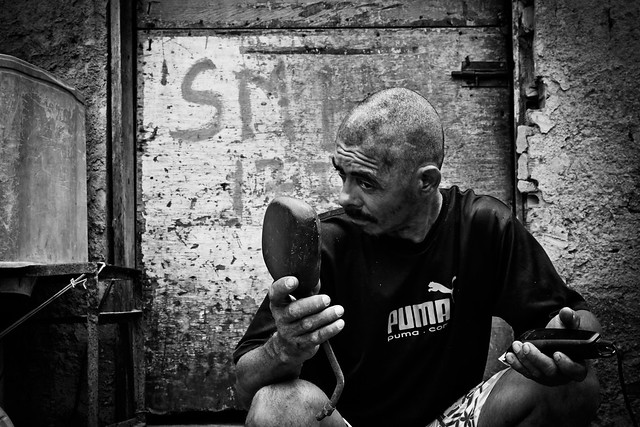