For original article in Portuguese on Yahoo! click here. Article by Raquel Rolnik, Special Rapporteur to the UN on Adequate Housing.

At this point, it does not take writing a thesis or doctoral dissertation to identify the profound meaning of Rio de Janeiro’s Olympic City project–the mega operation of real estate appreciation within the city of Rio de Janeiro. The mayor himself explained this clearly at the launch of Olympic City Monopoly, (a Rio version of the famous board game) by Estrela. In addition to (free) licensing the trademark of ‘Olympic City,’ the city government spent R$1 million for 20,000 copies of the game, which are being distributed to public schools. In May, Estrela will begin selling the product in stores. 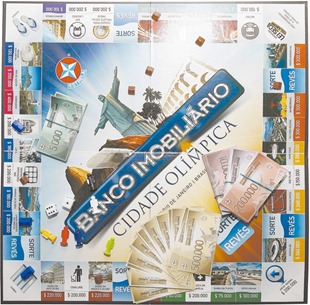 With this latest edition of the board game, which has been around for decades, players do not buy buildings on important roads in the city, but instead the player invests in traditional tourist locations–such as the Aqueducts at Lapa, Copacabana, and the Corcovado, but now also in the new ‘brands’ of Rio as Olympic City: the Marvellous Port (port revitalization program), the Family Clinic (public health clinics), the Bairro Carioca (public housing development), the BRTS (express buses), the Rio Museum of Art, the Museum of Image and Sound, etc. The chance cards and community chest cards, that determine monetary gains and losses of individuals, hold gems such as “Your property value has gone up with the pacification of the neighboring community. Receive R$75,000.”

Many people and various institutions have already condemned the misuse of public funding, the possible illegality involved in using mayoral resources for propagandizing the management of Eduardo Paes/Sérgio Cabral, and are questioning the pedagogical impact of such a game for children and teens. Although I agree with all of this–and the Federal Prosecutors’ Office (Ministério Público) will address some of these concerns–I think it’s dangerous that the critiques focus on these points, reinforcing the idea that the main problem is the mayor spending R$1 million to buy a game and covering up the true scandal–where all these public expenditures (and privatizations!) are being made, which is the nature of what’s at stake with this Olympic City operation.

The main issue is how the game demonstrates, normalizes, and at the same time transforms the actions of the municipal government into something positive through the increase in value of real estate and market size of the city. The questions that won’t lay to rest are: “What’s the nature of the interventions underway?” In what way will they combat inequality and promote socio-territorial inclusion in Rio de Janeiro? Who wins and who loses with these changes? In the game, Estrela and the municipal government respond candidly and clearly to these questions. The effects are positive when they spur an increase in value: in the financial world of city-wide production, that is the only value that matters.

In time: among numerous reactions to the launch of the game, I discovered a few humorous ones that deserve sharing. One is the Facebook page that satirizes the game. Another is Rafucko’s (a Rio broadcaster and video producer). Check it out below.