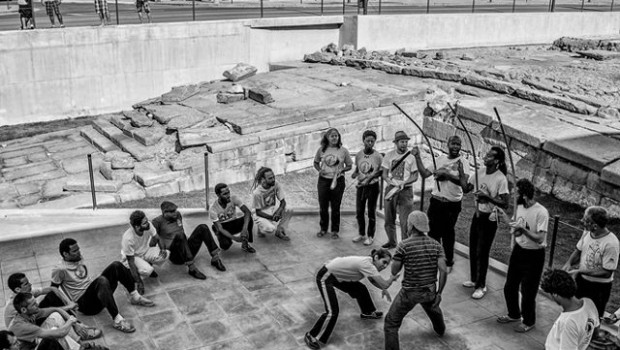 A vision of the tropical paradise

The city of Rio de Janeiro has always been the postcard image for Brazil. A significant portion of the symbols of Brazilianness that now form part of the Brazilian imagination and circulate around the consumer-driven globe comes from Rio. The Rio Carnival, samba, Christ the Redeemer, football; all of these elements contribute to the entertainment and leisure industry at an international level. 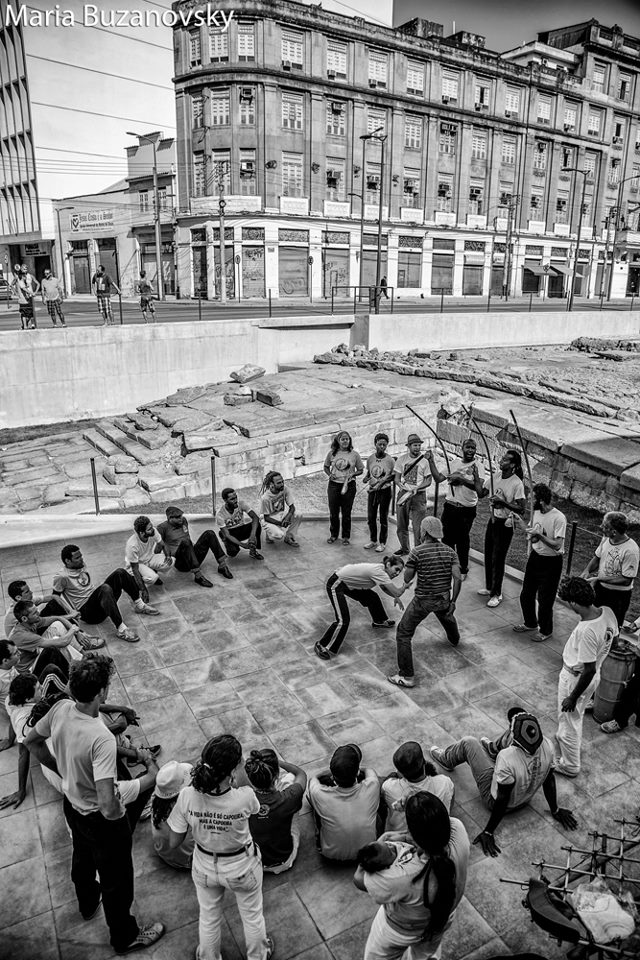 Hermano Viana, in his book ‘The Mystery of Samba’, highlights a historic encounter which occurred in Rio in the early twentieth century between important Brazilian cultural figures. During a casual encounter during a visit to the city, the sociologist Gilberto Freyre went to drink cachaça and listen to music with the social scientist Sérgio Buarque de Holanda, the journalist Pedro Dantas, the composers Villa Lobos and Luciano Gallet, as well as Patrício, Donga e Pixinguinha, eminent figures in the creation of Rio samba. According to Hermano, this meeting of intellectuals from the worlds of social science and culture with geniuses of popular music would become a founding story in explaining “the invention of samba” in Rio, as a symbol of Brazilianness and furthermore demonstrating Rio as the epicentre for the production of Brazilian identity in the national context.

Two other important symbols were responsible for the exotification of Rio and the exportation of its characteristics as symbols of Brazil: Cármen Miranda and Walt Disney’s character Zé Carioca. Despite having been born in Portugal and broadly taking influences from Bahia, Cármen lived in Rio and portrayed the Rio music scene in her films and shows. The character Zé Carioca was created in the forties, following the “Good Neighbor Policy” of the United States and is believed to have been designed by Walt Disney himself, in Rio de Janeiro, as a way to honor the wonderful city. 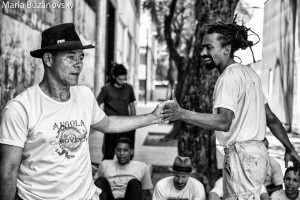 Having been the second Brazilian capital after Salvador, numerous important factors highlighted the city of Rio de Janeiro within the national historical context. The historical and cultural trends which constitute the city’s biography left, over many years, deep impressions in the urban landscape. From an urban perspective the city was continually marked by socio-spatial divisions between the white elite and the vast black and mestiço population who initially occupied shacks and tenements, and later climbed up the hillsides to found favelas, areas of steep slopes and uncertainty.

At the beginning of the nineteenth century, the arrival of the Portuguese royal family caused profound changes in the city, which in demographic terms received a huge number of Portuguese elite, escaping the old continent during the Napoleonic War. The city of Rio de Janeiro was the setting for important political events such as Brazil’s independence, played host to the monarchy of two kingdoms, was where the end of the monarchy was announced along with the beginning of the republic, as well as having been the location for the signing and declaration of the end of slavery. In one way or another, all of these political events affected the urban geography of Rio, creating fragmentation, breaking up the urban space and causing social and spatial segregation for the least privileged groups. 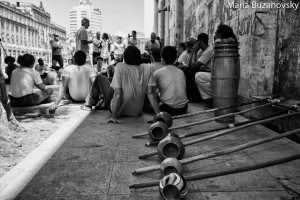 In his book ‘A Capoeira Escrava’, Carlos Eugénio Líbano describes the capoeira gangs as organized groups of blacks and mestiços who occupied areas in the city of Rio to practice their art. It is believed that the groups were extinguished as a result of the police repression unleashed by Sampaio Ferraz, chief of the Rio police, who also practiced capoeira, and also as a result of the urban “cleansing” and remodeling policies which occurred in Rio at the beginning of the twentieth century. At this time the Vaccine Revolt occurred, a popular uprising against the obligatory smallpox vaccination laws. In truth, the obligatory vaccinations constituted a form of state intervention against the poorest elements of the population, who were understood as an “illness” which needed to be exterminated from the city. In the first decades of the twentieth century mayor Pereira Passos carried out huge changes to the urban space of the city of Rio, with the aim to modernize living standards in line with “the civilized West,” leading inhabitants to be divided into two areas: the poorest forming the favelas on the hillsides and the richest moving to the neighbourhoods of Ipanema, Copacabana and the South Zone more generally.

Reinventing Rio in the global context 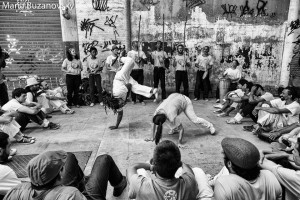 History is often cyclical, and it is no wonder that from time to time policies and forms of social and urban intervention used in the past reappear, adapted to the contemporary situation. As a result of two huge international events, Rio de Janeiro has once again become the target for urban policies that outline profound territorial changes and new forms of hygienism, resembling those of the past but with a subtle adaptation to the present. Of course, we are referring to the interventions linked to the World Cup 2014 and the Olympic and Paralympics Games in 2016, for which Rio will be the principal host. Astronomical efforts are being made to restore Rio de Janeiro to the world tourism map and, in light of the global economic crisis, this is a great financial and political moment for Brazil. Yet despite “noble” proposals for economic advancement, issues denounced by social and cultural movements that deserve attention have instead been brushed over and hidden.

Thinking about the city and roda do Cais do Valongo 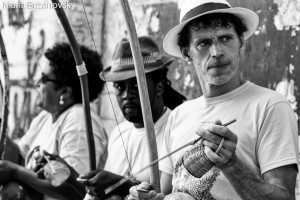 Cais do Valongo (Valongo Wharf) is located in the port of Rio de Janeiro and has always maintained links with Afro-Brazilian culture, be it from having been a warehouse for slaves in Rio or from the presence of capoeiristas, babalorixás and yalorixás (leaders of Afro-Brazilian religions), sambistas and other characters from Rio’s popular culture. Cais do Valongo has itself been the site of great urban change over many years, for example in 1893 when it was extended in preparation for the arrival of the empress who would marry Pedro II and consequently was renamed Cais da Imperatriz.

The Cais de Valongo roda (circular assembly of capoeiristas) was conceived by Carlo Alexandre Teixeira da Silva, known in capoeira as Master Carlão. The master started his study of Angolan capoeira in the 1980s and was part of a generation of capoeiristas in Rio who made efforts to revitalize Angolan capoeira, and also promote the art form outside Brazil. For a time Mestre Carlão lived in London, arranging theatre productions fusing together both traditional theatre and Angolan capoeira and also organizing one of the most important capoeira events in London, The Movement for Change conference. 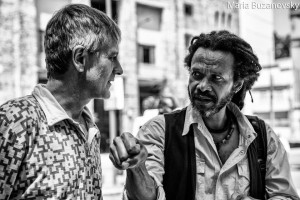 On returning to Brazil to once again live in Rio, Master Carlão held classes close to Cais do Valongo, recognizing the importance of the area and the need to create a symbolic place for the movement. The Cais do Valongo rodas are of special interest as they are the first to be dedicated to Prata Preta, a black leader in the Vaccine Revolts. The roda is also visited by and counts amongst its participants various prominent personalities who study capoeira, black culture and the city of Rio, such as the journalist Décio Teobaldo and the historian Mathias Assunção. The main idea behind the roda, according to Master Carlão, is “to occupy public and historic spaces, to establish our presence in areas which are becoming more and more controlled.” According to the master it is a response to the municipal Shock of Order policy in the occupation of public spaces whereby municipal administrators have implemented strict rules limiting popular culture activity on the streets. According to Master Carlão and other cultural agitators from Rio’s capoeira scene, the area of Cais do Valongo is viewed with great speculative interest by investors, be it as a result of the historical importance or simply as a question of land value, but above all in view of the large investments they intend to make there. As well as the capoeiristas, other groups have used the square such as Jongo groups, the Carnival “bloco” Prata Preta and indigenous groups. 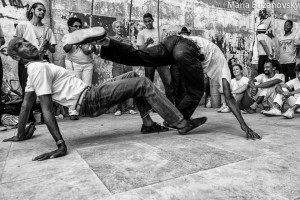 It is important to understand that this activity of occupying and intervening in public spaces by the capoeiristas in part reinforces the cultural practice, highlighting how it is a popular activity in dialogue with the social groups which occupy urban Rio. But they are, above all, a driven and political entity in favor of the city, demanding the right to demonstrate via cultural means and to oppose any form of elitism and socio-spatial segregation which public authorities consider implementing. Note also that the roda do Cais do Valongo is a driving force behind the promotion of the practice of Angolan capoeira in Rio de Janeiro. As well as the assembly and practice of the group, there are discussions, speeches occur and can eventually lead to interventions of other groups. As a result of this activity, leaders of other groups have also boosted their own presence on the streets creating a spontaneous movement, linked to a common sentiment of intervention in the city and joint engagement of Angolan capoeira creating the Conexão Carioca de Rodas na Rua (Rio Connection of Capoeira Street Circles), an initiative by capoeiristas to help integrate already existing street groups into one body. The groups involved in this initiative are Grupo Volta ao Mundo – M. Cláudio (Roda in Praça São Salvador, Laranjeiras); Grupo Kabula Rio – M. Carlão, CM. Leandro, Treinel Fátima (Roda do Cais do Valongo); Grupo Ypiranga de Pastinha – M. Manoel (Roda in Cinelândia, Centro); Grupo Aluandê – C.M Célio (Roda da Feira do Lavradio, Rua do Lavradio); Grupo Valongo – Treinel Maicol and Pedro Rolo and Roda da Praça XV with Prof. Fábio-Pezão of the Instituto Uka – Casa dos Saberes Ancestrais.

The Cais do Valongo roda is here to stay. As well as the ritual of Angolan capoeira, mandinga and the theatricality of its practitioners, the Cais do Valongo roda is a marriage of numerous artistic expressions. Videos have been produced, lectures held, photographic experiments taken – in particular the work here featured by photographer Maria Puppim Buzanovsky should be highlighted – and yet more projects are planned. The rhythm and beat of Rio is reflected in the roda do Cais do Valongo.

Ricardo Nascimento is a geographer, currently undertaking a doctorate in Anthropology at the New University of Lisbon.