On Friday, February 25, a group of concerned citizens gathered along Avenida Marechal Câmara, in front of the Headquarters of Rio de Janeiro’s Public Defenders to protest the increasing proximity of the Mayor Eduardo Paes’ administration to the autonomous Public Defenders office.  They protested outside as the Mayor met inside with the state’s public defenders, reportedly to defend his plans for development in preparation for Rio’s mega events and to seek their cooperation. 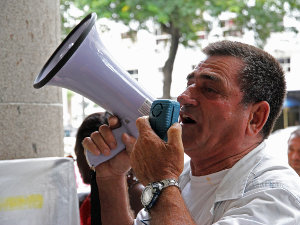 Claiming that several communities are located in areas of environmental risk, the City has begun tearing down homes in poor neighborhoods in Rio’s West Zone from Barra da Tijuca to Jacarepaguá. On the very day of the protest, homes were being torn down in Vila Harmonia. Though residents assert that they are not trying to stand in the way of the government’s construction projects, they demand dignified and adequate alternatives to their current housing situations. “Campo Grande and Cosmos are too far from our jobs and from our families,” Graça, a 15-year resident of Vila Autódromo told me.

Late last year, the community of Vila Harmonia had won an injunction, thanks to the Public Defenders, which suspended demolitions. The Paes administration responded by calling on the Public Defenders to “cooperate” with the city in its infra-structure projects ahead of the sporting mega events. The demonstration took place in front of the building in which Paes was concurrently hosting a lecture about the World Cup and the Olympics, to which all of the Public Defenders were invited. The residents of Rio had gathered outside to defend the Public Defenders from being co-opted by their opponents.

At about 1:30 pm, 20 residents of Vila Autódromo, led by the President of its neighborhood Association, Altair Guimarães, gathered along Rua Santa Luzia, unrolling banners and distributing copies of a letter written to the Public Defenders and the City. 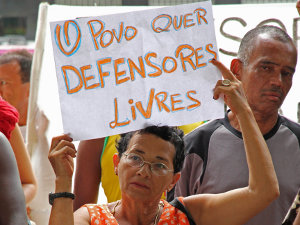 At its height, the demonstration included 150 people: residents and children from Vila Autódromo, Parque Columbia, Vila Harmonia, Vila Taboínha, among other communities; City Councilman Eliomar Coelho; State Deputy Marcelo Freixo and a handful of students from Rio de Janeiro State University (UERJ), not to mention the occasional passer-by who learned of the cause and showed support. The demands of those present were clear: the justice system must remain free and independent; an end to corrupt municipal and state politics; and the respectful treatment to all citizens of Rio de Janeiro, regardless of class.

One resident read aloud the letter which called for any cooperation between the Public Defenders and the Executive branches of government having solely the purpose of facilitating the Public Defenders’ service to the citizens that turn to them, as is set by law. Then, together, the group read article 429 of the Municipal Organic Law, which states plainly that there is to be no removal of squatter communities unless the occupied land presents a physical risk to the citizens that live on it. The group also read passages from the Universal Declaration of Human Rights, ratified by Brazil, establishing the universal right to adequate housing. 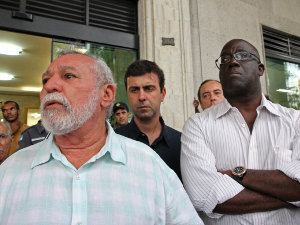 Though some participants lamented the relatively small turnout, the general attitude was one of optimism. “We must be heard,” countless residents exclaimed. Perhaps the greatest accomplishment was when Federal Deputy Edson Santos appeared to receive a copy of the letter. His sister was among the crowd and had apparently called him. He spoke briefly, expressing his awareness of the community’s concerns and confirming his promise to defend the rights of the people of Rio. Still, as the demonstration came to a close, feelings of accomplishment were tempered with a careful apprehension. “The government doesn’t care about the poor. We are counting on the Public Defenders… For now, all we can do is wait,” said Antônio, a resident from Parque Columbia.