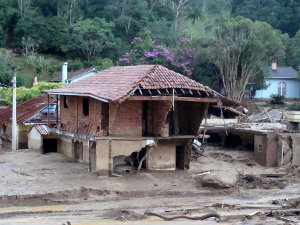 It had been raining for over a month, more than we were supposed to receive in São Paulo for the entire Summer. But Rio had it worse. More than 61cm had fallen in the mountainous region near Petrópolis, Nova Friburgo, and Teresópolis, causing mud to cascade down into the villages and rivers of the area. Many people were at their summer homes for vacation, and almost everyone was sleeping at 3 in the morning when a rush of mud, trees, cars and debris covered homes to their roofs.

It took a day or two for the army to clear a path through the mud to get to the first houses affected. What they found was devastating- whole homes washed away from their foundations, horse farms destroyed with injured animals roaming free, and survivors stranded on all areas of the mountain chain. After watching the death toll rise from 300, to 400, to 500, my boyfriend Luis and I decided we had to do something. Since Luis had worked for the Red Cross in Ceará, he knew the head of the Red Cross in Petrópolis, the nearest city that was not directly affected by the floods. 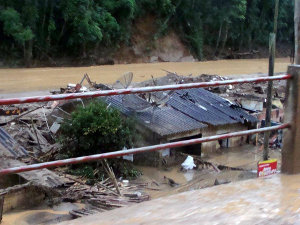 Amidst accepting and organizing donations at the Red Cross, we were needed to represent the Red Cross on a trip to Itaipava, one of the most affected areas, to take pictures and bring donations to a church in the hills. We loaded up the car and began the trek to Itaipava, an upscale resort village about an hour from Petrópolis. We passed lines of cars waiting to donate at army-controlled depots, and made a stop ourselves to carry bread from those on the side of the road who were not allowed to climb the mountain themselves, since car access to Itaipava was limited to residents, the army and the Red Cross.

Well before we reached the affected area we saw piles of muddy furniture sitting on the side of the road and people doing their best to sweep out mud from flooded lower-levels of their homes. We first drove along the river, which had then returned to normal size after tripling its girth during the mudslides. The flood waters leveled some homes and spared others indiscriminately.

As we crossed a bridge, we saw houses on the wrong side of the road which had been flooded up to their roofs in a matter of seconds, even trapping those inside. With the mud so heavy and thick to clear out, the army encouraged mourners to bury their dead inside their houses. But some still attempted to dig out their loved ones, wishing to give them a proper burial. 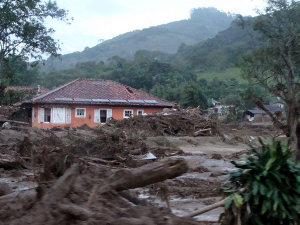 Now on fully mud roads created just days before, we passed a house that had been noticeably more cleared than other sites. Red Cross volunteers explained to us that a family of thirteen was vacationing here when the mudslides struck, killing all but one man, whom they found on the roof of the house and told his rescuers of the victims inside. A hole on the roof had been made through which to retrieve the bodies.

The force of the water and earth rushing down the mountain swept cars, debris and even people and animals miles from their homes. Driving past an overturned car, we pulled to the side to let a giant truck pass, it carried Thoroughbreds down from a demolished farm up ahead. Upon arriving there, we found that while many of the expensive horses were driven to safety, workers stayed behind to look after the property- with no water or electricity, and only hopes for their livelihoods after the debris is finally cleared. 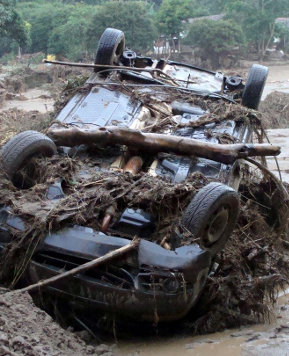 As we continued up the mountain to the growing piles of debris by the roadside, we were stuck in another line awaiting clearance to cross a bridge. A dog wandered down the street, sniffing each car for a trace of its missing owner.

We soon reached the end of the road. Not because the road ended, but because mud and pieces of homes and trees were blocking the way. We could still read the inviting signs for small inns and stores and farms up the road, but there was no way they could be reached except by dirtbike, if they were still there. We looked at ourselves and the landscape, listening to the rain become harder and harder. Night was falling, so we carefully turned around, dropped off the donations, and silently made the trek back down the mountain.