When I first thought about moving to Vidigal, the first and only concern of the few people that found it strange was: what about the drug traffickers? Since I knew the danger in this respect was zero, the hill seemed like a harmless place. My legs, however, found out little by little that this was not the case. 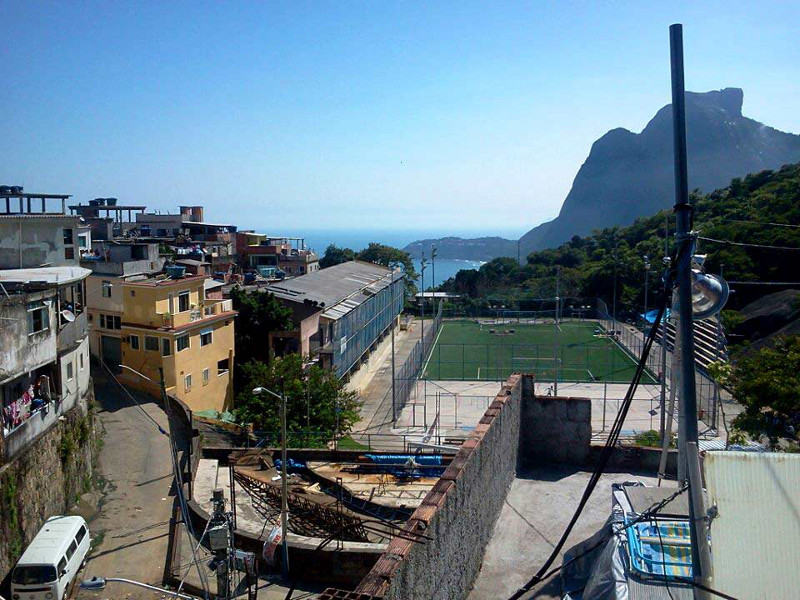 The greatest challenge of the favela for me was learning how to walk up the stairs quickly without falling. I have countless scars from my first year here. Among them, there are a few that have become affective tattoos. They are from the day following the Shock troops’ entrance on the hill on November 13, 2011, the day I consider the official birth date of my website, Vidiga!.

I slipped in the oil poured by drug traffickers to prevent (with relative success) the entry of armored cars to the hill during the occupation. Four intense days of reporting followed, trying to unveil what was happening and what would happen after their entry. I’ll say upfront that nearly a year and a half later, almost nothing’s happened.

I learnt about Vidigal because of its fame, in 2002, when I wondered where so many of the talents in the movie City of God came from. The world turned, perhaps on purpose, and eight years later there I was, working with those same talents, who today have formed the band Melanina Carioca. 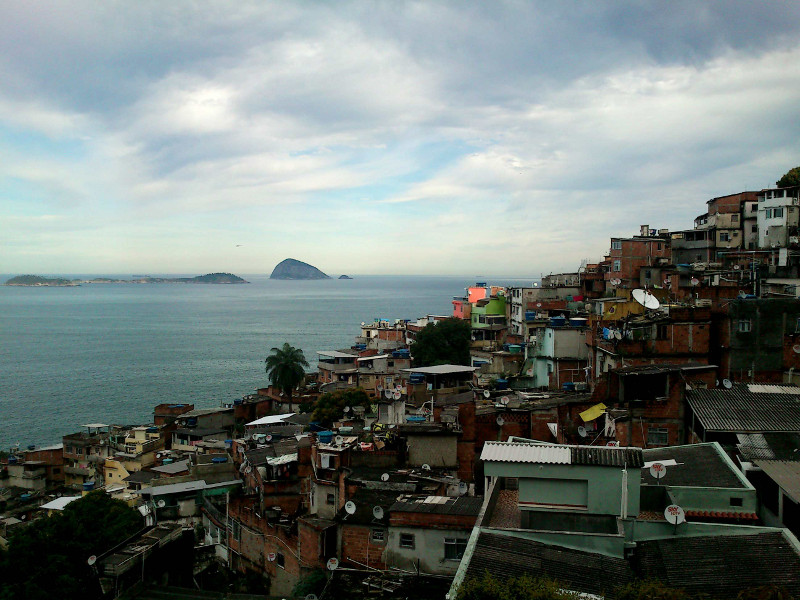 In 2011, after a few months working with them, I finally realized there was no other option than to join the hill that for a long time has been one of the most creative hubs of cultural production in Rio de Janeiro.

Perhaps I’m one of the only people not to move here because of the paradisiacal views (which I didn’t even know about as I’d only visited at night) or because of the proximity to the South Zone beaches.

I just wanted to live the favela, and that is what I did.

Living the favela moved me, a few months after my arrival, from a comfortable house in the lower part to a guesthouse at the top of the hill, today the well-known Alto Vidigal.

Every day I dealt with the dreaded stairs and with the armed men that took care of the Arvrão looking point (and who were not even slightly bothered by the presence of tourists), and on a weekly basis with the baile funk in Largo do Santinho, whose sound rose throughout the hill. 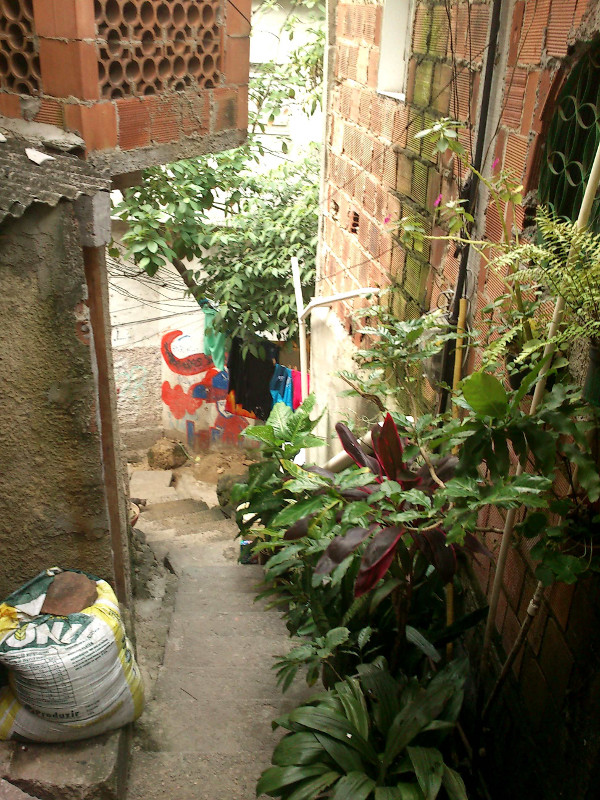 I went to the baile funk, which had its last edition a week before the entry of the police, and it taught me some of what I know today as most important. The most peaceful and diverse party I have ever attended took place on a corner, on a slope. It was run by armed men and attended by what the dominant class calls the dregs of society: poor people and favela residents. Gay couples held each other and danced down to the ground. On the other side, you could buy whatever kind of illegal drugs you were looking for. On this side, the most fabulous drinks I have ever drunk in my life.

And no one fought! No one hit anyone over the head for disagreeing with his sexual orientation. I thought about those elite kids’ clubs where every now and again someone goes home beaten because of a stupid argument.

The lyrics of a funk song summarized this time for me: “it is the right side of the wrong life.”

With the pacification and the intense work on my website, I started to feel what the residents feel. To the point that I have been assaulted and arrested for trying to film the attempted demolition of the soccer field at the top of the favela.

I’d been living on the hill anonymously until that point, then I started to get greetings from strangers that had seen me on TV handcuffed for one of their causes.

I ran out of money and started living in a small house with no air conditioning and no view of the famous sea. I don’t know whether it’s sunny unless I walk outside and climb a small stairway to be able to look up to the sky. They say when you lose one of your senses, you perfect the others. As if it were a radio drama series, today I know everything that’s happening, without seeing it happening. 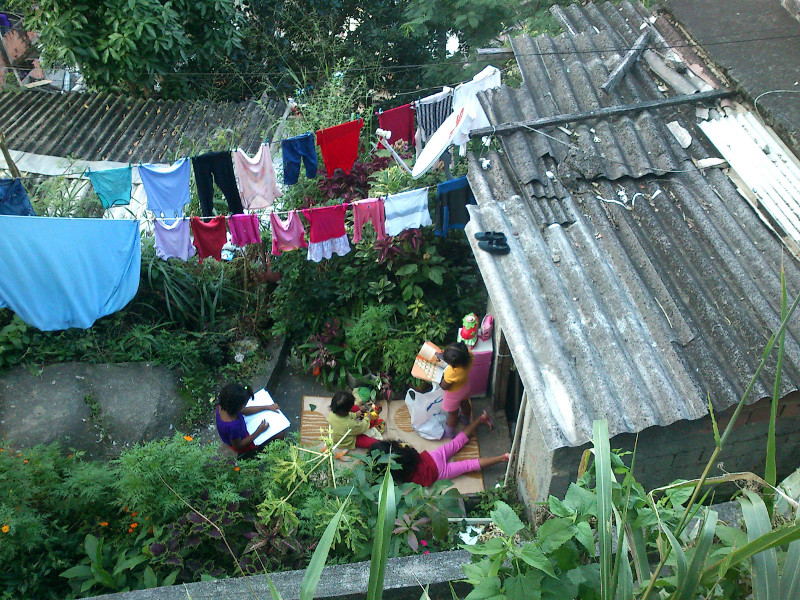 I know it has stopped raining when the kids’ voices echo loud in the streets. I know the day before the water runs out by the comments of one of the housewives in the dozens of surrounding houses – houses that together might occupy the equivalent space of the house in which I was born.

I learned about the bus strike because someone’s relative, a bus driver, was ordered by the company itself not to work that day. That is also how I learn that the alcoholic neighbor has quit cachaça for a while, and I hear the concerned advice his friends give him. I know the children’s names and their favorite games. Without seeing a thing.

Eating at a restaurant, buying groceries or walking along the street are working hours. Intravenous information.

I run into Cícera and ask if she has found a place to set up her barbeque stand. I congratulate Fabinho on the fact that his restaurant has been receiving increasing media attention. I visit Move Id to find out that night’s party really was stopped. I return home running up the stairs. Getting there without falling, I convince my joints that the saints above help too.