On Thursday morning, April 11th, approximately 400 protesters representing various social and political movements marched from Largo do Machado to the Palácio Guanabara in Laranjeiras to demonstrate against the privatization of Rio’s historic Maracanã stadium. Inside the Palace, envelopes were being opened to determine which companies would be able to compete in the bidding process to administer the Maracanã complex for the next 35 years. 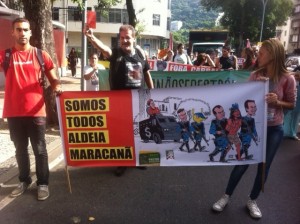 With signs that read “World Cup for whom?” and “We are all Aldeia Maracanã,” protesters highlighted several communities at stake including the Friedenreich Municipal School, the Aldeia Maracanã Indigenous Museum and Village, and the countless families removed at Favela do Metrô and neighboring areas due to the sporting event. They also emphasized the strong alliances between politicians and powerful business interests involved in this “completely extrajudicial” bidding process. One of the two main consortiums vying for the bid is an alliance between AEG (international stadium administrators), Odebrecht (Brazilian construction and engineering company) and IMX (venue and entertainment company owned by billionaire Eike Batista).

Protesters assert that the process is taking place without any public consultation and directly between Mayor Eduardo Paes, Governor Sergio Cabral, and businessman Eike Batista in order to build “yet another shopping mall” with exclusive consumption and leisure spaces, while simultaneously using billions of dollars of public money to destroy this “emblematic space of the city.”

“We defend the perspective that Maracanã is a symbolic space of the city precisely for its popular character, and that this should be maintained,” explained Gustavo Mehl, an organizer from the Rio’s Popular Committee for the World Cup and Olympics, part of the national network of organizers monitoring the impact of the upcoming mega-events nationwide. The Maracanã complex currently contains accessible opportunities for sports, leisure, education and culture that will be lost upon the “hand-over to (Sh)Eike Batista,” as one protester’s playful sign read. 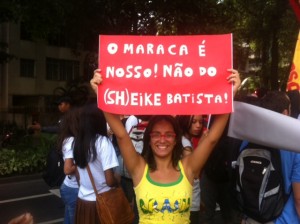 A major point of contention is the plan to demolish and relocate the 48-year-old Friedenreich Municipal School. Carlos Sandes, from the Parent’s Commission, explained that Friedenreich is the 10th best municipal school in Brazil and the 4th best in Rio de Janeiro. “The Friedenreich school will lose all its identity that exists in Maracanã. The school works well… No one understands this!” Sandes fumed that the repercussions of demolishing the school will reverberate beyond Rio de Janeiro and spoke to the devaluation of education throughout Brazil.

Upon reaching the palace, protesters were denied access to proceedings, although legally required to be open to the public. The lack of transparency and curtailment of public participation in the bidding process was seen as the latest iteration of the undemocratic nature of the privatization of Maracanã, which has included forced evictions, police brutality and a general disregard for public opinion.

Marcelo Freixo, State Deputy and head of the Human Rights Commission, also had to negotiate with the authorities to be allowed in. Once inside, he held up the bidding process by demanding that the social movements had a legal right to enter and observe the proceedings. “They are [acting] against the law. This bidding process is public, therefore it guarantees the participation of any interested person,” he stated to reporters. Eventually, a concession was made that four representatives from the protest would be allowed in, which sparked an intense internal debate among the leaders of the movements.

There was concern as to whether only four could truly represent the groups present outside, and that by attending and not being allowed to participate in the proceedings, it would be construed as public sanctioning of the results. “Is it worth it for us to enter so that tomorrow the authorities can say we legitimized the bidding process of Maracanã?” exclaimed one protester. Eventually, it was decided that it was better for everyone to remain outside in solidarity.

Even the criteria for media entry were unclear. At one point, credentialed journalist Daniel Mazola was denied entry into the proceedings. He exclaimed that only press with commitment to the state government was allowed to enter. “I am an advisor to the Brazilian Press Association and member of the Commission of Freedom of the Press and Human Rights… [yet] I am being prohibited from going inside the palace, from observing the process!” After an hour and a series of back and forth confrontations with the police, he was eventually permitted entry. 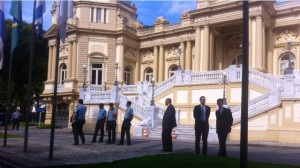 Gustavo Mehl reiterated that the exclusivity of access at the bidding was another example of the “lack of transparency, the authoritarianism, and lack of legitimacy of this process.” He and others urged the international community to recognize the violations of the right to the city–including police brutality, forced evictions, and the privatization of public space–that are taking place in the name of upcoming mega-events in Rio de Janeiro.

A protester concluded, “It is my very strong personal desire for those abroad to see that Rio de Janeiro today is the stage of disputes, the stage of violations because of the World Cup and the Olympics […] If you are abroad, don’t be complicit in this crime that the city of Rio de Janeiro is committing.”