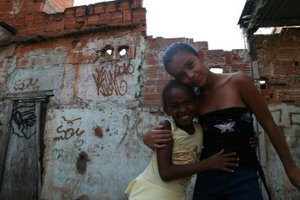 This is part 2 of a two-part article about a community of 60 families on Largo do Campinho, about half of whom have already been evicted to make way for the Transcarioca BRS (Bus Rapid Service) project. For part 1, click here.

Valnei Lima da Silva lives with her husband and two daughters, Taynara (10) and Nayara (17). Valnei, originally from Ceará, a state in Brazil’s Northeast, jokes about her husband’s thick accent, since he’s from Curitiba, in Southen Brazil. Nayara is in her last year of high school, and Valnei fears they’ll be forced to move to Cosmos where they believe there aren’t enough spots in schools for children. Nayara has also just begun a private English course, the first step in her dream to speak English and travel abroad. As we talk, the younger Taynara sits on the table, swinging her legs back and forth, and bashfully giggles every now and then. When she finally gets the courage to speak up, she reveals precious moments in community life, telling of church events at Christmas time last year, when children gathered, ate together, sang, and received presents of clothes and toys.

Valnei is now afraid to leave the girls at home. One day, city workers showed up without warning to tear down the house next door. With the threatening noise of destruction crashing in on their home, the girls hysterically called their mother at work, who rushed home immediately to keep workers from demolishing her home, too. “You have to shout, ‘this is my house! You can’t tear down this wall because it’s part of my house!’” She doesn’t let the girls walk to school alone anymore either; “The houses they tear down are left open and homeless people come to live in them. They use drugs inside, and all the kids here walk by to go to school, with these strangers coming and going.”

Pastor Jessé Gomes de Lima Filho moved to the community from another neighborhood nearby and has lived here for the last 14 years. He and his wife, Rosilene, are particularly worried because they have a sixteen-year-old daughter with special needs. All her medical treatment is taken care of nearby, and the medical services she needs do not exist in Cosmos. No one from Social Services has been sent to speak with them about these issues. 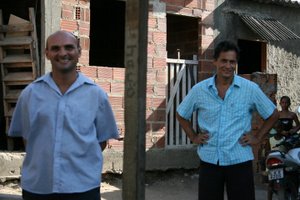 Luciana tells us that workers “pressure women in ways you can’t even imagine. Usually there are only women around when they show up. They will try everything on the women, but if there are men around, they back off.” She mentions that insulting women is common. Sérgio Sartório de Souza shares with us from a husband perspective. “They tell them there’s no way, there are no alternatives, that Cosmos is the only option. We get home at night, tired from work, and have to hear this from our wives. There was one day I had to miss work because it was moving day, so we had to wait at home for the workers. I talked to one about the way he came into my house and spoke with my wife. But the same thing he told my wife, he told me.”

Luciana mentions other shady tactics used by municipal workers, the most appalling of which was to offer, during a meeting on January 5th, to send a government bus to take residents to see the apartments in Cosmos and to have a look around. Luciana explained the trick, “I have to go with my own legs. I have to know the distance. There’s not going to be a city bus everyday at my door to pick me up. This is an illusion that they create so you’ll go with them and you’ll think it’s great and it’s just a pleasure trip. It’s not.” The day the bus showed up, however, residents were told that getting on the bus meant they were accepting the apartment. Luciana refused to go. 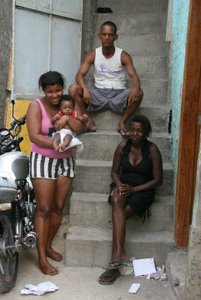 Residents are organizing to make sure there’s always someone home in case government workers show up, and when they do, they gather as many people together at once to follow them around. Over the last two weeks, they haven’t received any new information about their case, except for an article in Globo that said construction would begin in the area on March 1. Since the judge temporarily suspended demolition, they are waiting on a court-ordered appraiser’s visit to move forward. There are rumors that they’re running out of apartments in Cosmos and that evictees will be sent to Santa Cruz, even farther away.

Luciana, though only 24, is now seen as a leader in this community, as someone who’s doing everything she can. “I can’t go out and have fun. This is my life now. People see me as someone who is going after things, but inside I’m worried. There are days when you’re sleeping and wake up with that fear. If I hear a loud noise, I think it’s the tractor. In the middle of the night, I wake up to make sure the moving truck isn’t coming in. Because they come in at 3am with trucks.” She tells us that most residents think they won’t win. “All we want is to receive fair compensation and time to move. We’ve done everything that’s humanly possible. We agree that this is for Rio de Janeiro’s growth. We don’t want to get in the way of anything. We just want it to be just.”