Member of the Urban Agriculture, Agroecology, and Economic Solidarity Movements, Luiz Poeta exudes love, peacefulness, and wisdom through his social activism. We visited him on a sunny afternoon at the center of his own organization, Verdejar (Becoming Green), located along one edge of Complexo do Alemão, a large group of favelas in Rio’s North Zone and site of a large police and military operation last November. Verdejar has an organic garden, an environmental park, and activities with local school children, all projects stemming out of its urban agricultural and ecological center. 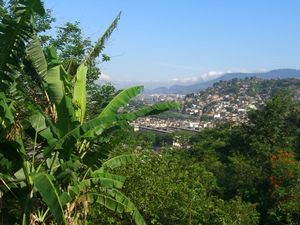 Founded in 1997, Verdejar members began by meeting weekly in this green area to plant and establish long term goals. Since then the organization has expanded and formed partnerships with other groups, forming the Complexo do Alemão Community Council for Health and the Committee for Local Development of Serra da Misericórdia (Mercy Mountain Range, the largest forested area in Rio’s brown North Zone) and even working with City Government to promote preservation of green areas surrounding the Complexo. Verdejar has achieved City Government recognition of this green space as an Urban Protected Area, in order to halt invasion for further construction.

Luiz is also a valuable local historian and his stories of the area, part of Engenho da Rainha (the Queen’s Mill), date back to colonization when the area was still rural. Luiz explains that the Queen who gave her name to the area was Queen Carlota Joaquina, wife of King John VI of Portugal. She had a sugarcane mill, corn fields, and a coffee plantation on the land. As urban expansion increased, she eventually divided it into lots for sale. Her name and reference to the mill remained. 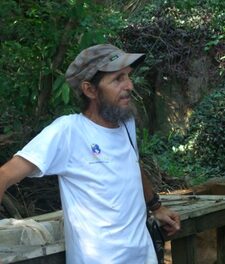 Luiz incorporates his appreciation for local history into his work as an environmental activist and into his own work as a poet. He movingly recited from memory one of his poems about the Serra, the poem that inspired the name for the Verdejar movement. In it he directly addresses the mountains, “your green needs to become green,” and he ended his poem by shouting and raising his right fist into the air, exclaiming, “I love you, Serra da Misericórdia, I love you!”

“I really like to drink from the fountain of love… I think we people are only going to change through love,” claims Luiz. Love is obviously the common thread that weaves through Luiz’s life history and the goals of Verdejar. “Agroecology is a movement that intends to transform the society it encounters. Love is practiced; people hug one another, live together, and value agriculture, womens’ rights and gifts, and quilombos (settlements where descendants of freed slaves still live today). It is a movement for transformation.” 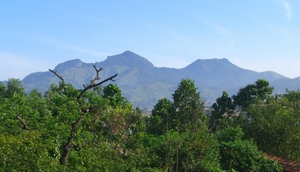 Luiz also actively incorporates art and culture into Verdejar’s work and mission, be it theater, music, or poetry. “Art and culture save people. They are the good things that emerge from the bad things,” says Luiz. Luiz’s vision for the Verdejar movement is long term, and he has great goals for Rio de Janeiro that he admits go beyond his lifetime. “The important thing is getting started. Our goal is to unite Rio de Janeiro and have just one Rio, one that includes people from favelas just as it includes other social classes.”