As the rain started to pour on Tuesday evening, May 28th, around 80 residents from the Horto community protested at the gates of Rio’s Jardim Botânico (Botanical Gardens) where the opening of world famous photographer Sebastião Salgado’s latest exhibition was taking place. Undeterred by the ensuing downpour, residents and supporters banged drums and held their banners high. “To brand as invaders the people who built this park is inhuman” read one held at the entrance to the famous visitor attraction. 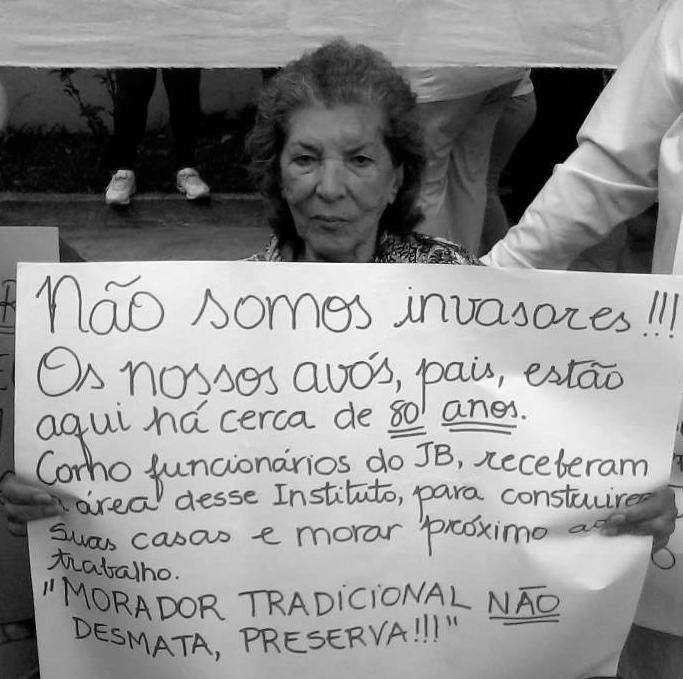 The community of Horto can trace its history back to the 15th century sugarcane plantation that occupied the land before it was disappropriated by King João VI in 1808 first to build a gunpowder factory, then later establish the gardens. Workers came from rural areas of Rio state and were given permission to build their homes near the park’s physical boundaries. In their community named Horto, the Portuguese word for orchard, workers cultivated saplings and plant species to forest the gardens and the adjacent Tijuca National Park.

Despite their well documented history, today the community of Horto–where many residents are elderly and have lived there all their lives–faces near total removal following the announcement by the Federal Minister of the Environment, Izabella Teixeira, on May 7th redefining the limits of the Botanical Gardens. According to this new delimitation, 520 of Horto’s 619 families must be removed to increase the Botanical Garden Institute research area. The decision represents an about turn for the government, who until last year was supportive of a project developed in conjunction with Rio de Janeiro Federal University (UFRJ) that would guarantee both the permanence and land titling of the community and an expansion of the Botanical Gardens’ area.

The decision of May 7th has outraged residents, human rights commentators and the community’s extensive network of supporters in both its denial of the historic importance of the community and residents’ contribution over decades to cultivating and preserving the federally owned Botanical Gardens and surroundings, and for being taken without any participation or dialogue with the community.

Moacyr Paiva has lived in Horto for twenty years after moving to live with his wife whose family has been in the locale since 1910. An impassioned member of the community resistance, he says: “They mean to terminate a community that has historic origins, in which the right to housing in the locale is unquestionable by Brazilian law and international agreements. This is totally unacceptable. It’s an abuse of basic human rights that’s being covered by the big media involved.” 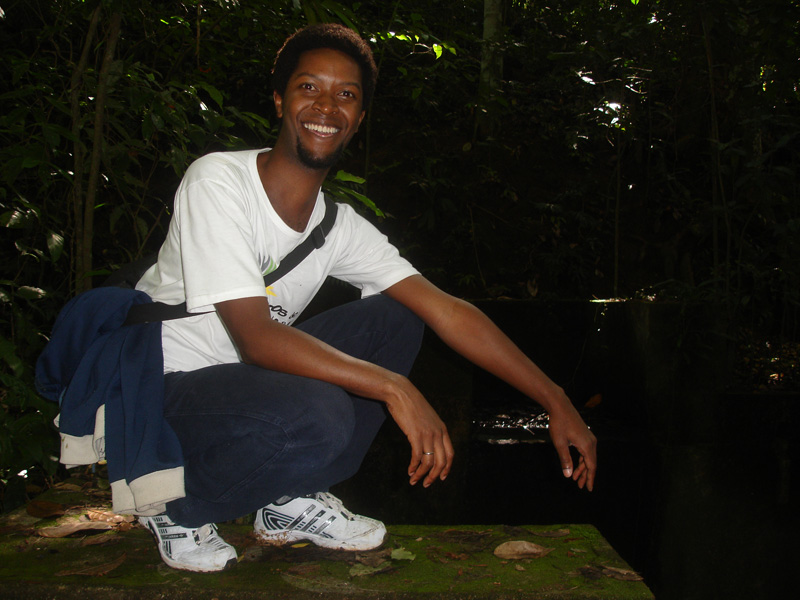 He refers to Brazilian media conglomerate Globo, whose headquarters are based very near Horto, in the Jardim Botânico neighborhood. Globo magnate José Roberto Marinho is on the administrative council for the Friends of Jardim Botânico Association, which filed complaints over the UFRJ land titling project with the Federal Accounts Court and managed to stop it proceeding. While the group has been successful in lobbying for the expansion of the institute at the expense of the area’s only low-income community, their supporters’ greatest influence is in shaping the narrative around the issue. Organizações Globo is Latin America’s largest mass media group with the second largest commercial TV network in annual revenue worldwide, two of the largest daily newspapers in Brazil (O Globo and Extra), radio stations, magazines, websites as well as owning companies on the food industry, real estate and financial markets. Globo coverage of Horto’s case persistently calls the community an “invasion” and residents “invaders,” language which deliberately paints the community as an immoral, illegal squatter settlement in an attempt to deny the community’s historic relationship with the area and gardens and undermine their legitmate right to remain.

Emerson de Souza is a lifelong Horto resident and coordinator of the Museu do Horto, an open-air community museum which has conducted extensive research to document the area’s social and environmental history. Over Sunday feijoada (traditional bean and pork stew) following a community meeting in Horto’s main square, he says: “We’ve managed to collect documents and registers and they all prove the authenticity of the family histories here. They also strengthen our discourse that breaks with the discourse attempting to be hegemonic that calls the residents “invaders.” How can someone whose family’s been here for a hundred years be an invader in the area, especially when [their family] was invited by the government of the time to live in Horto?” 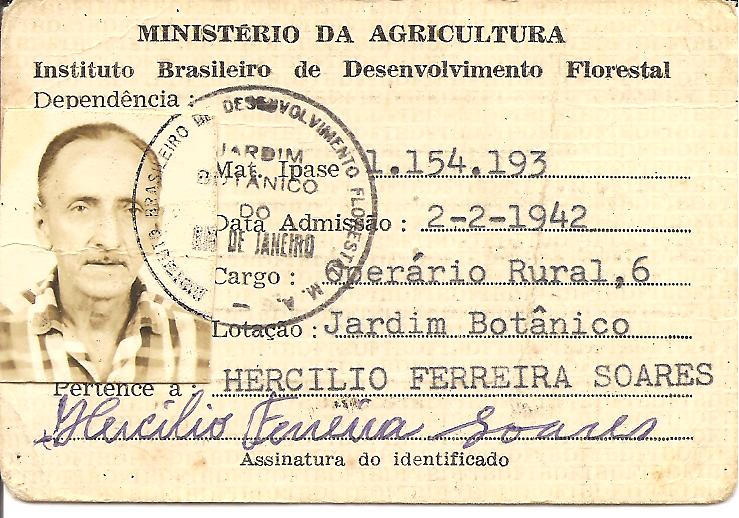 Emerson goes on to talk of how the community’s culture of ecological care, as much in the workplace of the Botanical Gardens as in their community, means they seek to preserve the Atlantic Rainforest in which Horto lies. He says: “This is an area that aids in the protection of the park and not one of invaders that came to destroy nature. They are two very different discourses. One is scientifically proven, the other is speculation.”

Speculation, specifically real estate speculation, is what Horto residents believe is the real motivation behind the removal. They feel that their wealthy neighbors in the mansions surrounding Horto would rather there wasn’t a low-income community in one the most expensive areas of the city, and that their removal will mean a rise in property values. Though the stated reason is an expansion of the Botanical Gardens Institute, 36 year old journalist and lifelong Horto resident, Demétrio Martins can imagine property developments taking precedence. He says: “I believe it’s a lie, that they want to do social cleansing, remove the poor so that in the future they can come with some other fallacy of ecological mansions or an ecological resort… I can see it [happening].”

Indeed this isn’t the first attempt to remove the community. In the 1960s, a condominium was planned for the area, then later a cemetery; both would have required the removal of Horto’s families, but they resisted and won. Then in 1985 lawsuits over the land were brought against residents, with many cases ongoing until today.

Under threat for so long yet secure in their historic, moral and legal rights to remain, the community has mounted an exemplary resistance. After the crushing disappointment of having the, according to Emerson, “super beautiful, wonderful project” developed with UFRJ abandoned, they have mobilized by holding numerous community meetings and demonstrations, reaching out to professionals in strategic areas and working incessantly to counter the Globo narrative and tell their story. They are fighting for participation in the process of defining their future and call for a reversal of the recent decision.

With political support in Brasília at the federal level, essential in representing the community and in keeping them informed of developments, they also count on support from politicians at the state and municipal level. They have developed a manifesto addressed to President Dilma Rousseff calling for participation with signatories including civil society organizations from Brazil and internationally, unions and academics, that was handed by Horto youngster Larissa Rodrigues to Rio State Governor Sérgio Cabral at a demonstration last Monday May 27th. Following the announcement of May 7th, UN Special Rapporteur for Adequate Housing, Raquel Rolnik, wrote a letter to the head of the Supreme Court expressing her deep concern over the potential human rights abuses in Horto’s case.

While their efforts in the political and judicial spheres are essential, their most effective resistance strategies have been in communication and networks. Combining a physical presence on the streets in regular protest events, with a social media presence publishing resident stories, videos and event details on Facebook, Horto has built an organized communication strategy with the aim of reaching as many people as possible, with suggestions to reach out to Vatican news channels in the lead up to the Pope’s visit to Rio in July. Making connections with fellow activists, such as political cartoonist Carlos Latuff who posted a video of Wednesday’s protest on Facebook and vocal commentator André Constantine of the Favela Não Se Cala movement, and participating in the World Cup/Olympics Popular Committee dossier launch, further spread word of their cause. Further still, last year a 17 year old author going by the pseudonym ‘Flávia’, whose family history in Horto goes back five generations, published a book on the stories, memories and anguishes of the community, cheekily titled Diary of an Invador.

Within Horto itself, where signs on houses in Portuguese and English with messages against eviction speak to passersby, internal communication is also impressive. A car with a loudspeaker now passes through the community with updates and demonstration details. Residents communicate with each other publicly online via the Facebook page. Importantly, community meetings are inclusive and participatory. At the meeting of Sunday May 19th where around 300 residents came to discuss and decide on whether they would comply with the government’s registration process, many people spoke in an hours’ long meeting that one international researcher present described as the best example of collective and participatory decision making she’d ever seen.

Residents voted not to comply with the registration, which they identify as a way of the government initiating the eviction process. Letters have been delivered this week in the community pressuring residents to sign up, saying that “the registration is important for the preparation of alternative housing.” Horto residents reject outright the possibility of leaving, as the decision to eradicate their community was taken without any consultation, dialogue or participation on their part.

It’s notable that while Globo uses a language of invasion and pollution to describe Horto, people from the community itself talk in distinctly ecological terms. They speak of “cultivating” their families and culture, living in “complete integration with nature,” that evicting them would be “yanking them from their soil.” With such profound connections to their community and the land, the words of fourth generation Horto resident Ana Beatriz Biazo, 19, aren’t surprising: “We’re always going to resist and fight because we were born here. Our roots are here. There’s no way we can leave.”