On Tuesday afternoon, July 2, more than 5,000 people united in Maré, Rio’s largest favela complex located in the city’s North Zone, in memorial to the ten people slaughtered in the shocking police operation of last week and to demand an immediate end to this type of police operation, where police agents enter favelas and kill with impunity. Organized by Maré residents associations, NGOs, social movements and community groups, the event was designed to be encompassing of all faiths and backgrounds and was entitled “The State That Kills – Never Again.”

Despite heavy rain, that then cleared for the actual event, thousands of Maré residents, human rights activists, NGOs, community groups, lawyers, academics and other concerned Rio citizens gathered on Rua Teixeiro Ribeiro by the 9th footbridge of Avenida Brasil from 3pm onwards. Between 5 and 6pm the demonstration took over the outer westward lanes of Avenida Brasil, one of Rio´s main arteries. Many participants and the large soundsystem float were dressed in black to show respect for the ten dead, including one police officer who died in the violent operation by the Military Police´s Special Operations Battalion (BOPE) last week.

On the afteroon of Monday June 24, an unidentified group performed a spate of armed robberies on Avenida Brasil before fleeing into Maré via the Rua Teixeira Ribeiro entrance. The BOPE then initiated an operation in which ten people died and dozens were injured, and the entire favela was left without electricity for over 36 hours. One Maré resident described it as “the worst operation I’ve ever seen.” On the evening of Tuesday June 25, 500 residents mobilized in an attempt to end the ordeal, forcing out the the BOPE’s war vehicle. A week later, the BOPE´s commanding officer revealed he hadn´t been informed of the operation.

Residents’ statements relay a series of abuses and the psychological terror of the operation. There are reports of a bullet hitting someone as they took there child away from a window, a couple cowering for cover on the floor of an alleyway as bullets flew overhead, BOPE officers breaking down doors and entering innocent people’s homes, someone coming home to find their roof terrace being used as a BOPE base, and numerous reports of verbal abuse by police officers.

At Tuesday’s demonstration, Jailson de Souza e Silva, founder of Observatório de Favelas and one of the organizers of the event told of how he’d been asked if the Confederations Cup had provoked the violent operation. He said: “It would be great if this type of incident only happened every four years. Sadly these are recurring [events].”

Located between Avenida Brasil and the edge of the Guanabara Bay, Complexo da Maré comprises 17 communities and has a total population of 130,000. Though it has a long history of struggle and achievement, rich cultural scene, and is home to several internationally recognized community organizations, violent confrontations between police and drug factions controlling the territory have marked Maré’s recent history and dominate all mainstream news on the neighborhood.

The strong association with violence was something many speaking at Tuesday’s event wished to reverse. Carlos from the Parque União Residents’ Association (one of Maré’s 17 communities) said: “We’re here with the aim of showing that Maré is peaceful. Maré is life. [We want] to show the entire population of Rio that peope here are good people. We’ve come together now to say that we can’t accept this type of violence towards our people anymore… It’s not war anymore, it’s peace.”

The call for peace dominated the speeches of community leaders who took to the microphone. That people want investments in health and education and not war equipment vehicles was repeated many times in both the speeches and the crowd’s chants and signs. Several religious leaders also spoke, with one pastor declaring that “if Jesus Christ were here today he’d be fighting against this state too.” Funk MC Leonardo of APAFUNK spoke and performed, along with actor Paulo Betti who spoke of his solidarity with the community and victims’ families. Later a theater group performed to a slow beating drum, lying on the ground, faces covered with a black cloth inspiring reflection on the lives lost. 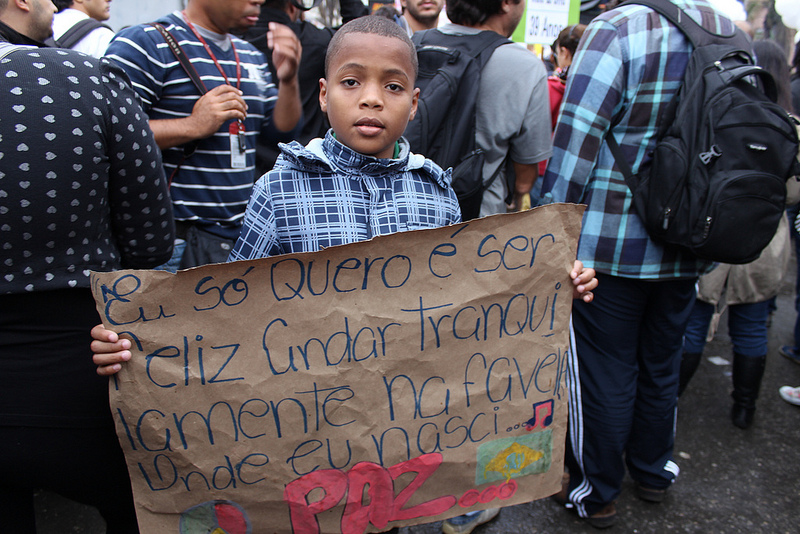 Despite the tragic nature of the operation that prompted the demonstration, Tuesday’s event was firm in its hope for the future. Though sombre in tone, particularly when paying homage to those who died, the overriding conviction that bouyed the sentiment of the crowd was that Maré residents, and favela residents as a whole, be guaranteed rights that have been cruelly denied–the right to come and go, the right to live in peace. In an emotional speech, Deize Carvalho from the Network Against Violence cried ¨Enough! Enough of killings inside the communities! Enough of violence!¨

There was heavy Military Police presence on the other side of the soundcar. Event organizers had arranged with police in advance, requesting security to be able to exercise the democratic right to protest and in an attempt to avoid confrontation between the police and protesters. Organizers stressed many times that the world was watching and it was important to maintain order. The demonstration had a start and end time and following the dispersal from Avenida Brasil, a police officer from the 22nd Battalion (Maré) gave interviews saying, “This was a great success. The organizers informed us of the necessities and we were able to attend to them. It wasn’t necessary to use our equipment. We’d predicted we’d need to, but it was extremely peaceful.”

Such organization, and a certain sense of constrainment during the act, made some concerned that the event may not have the desired political effect. One of the stated demands of organizers is an apology from Governer Sérgio Cabral and Rio State Public Security Secretary José Mariano Beltrame for the “disastrous” operation.

Atila Roque, Executive Director of Amnesty International Brazil, which has been working with local NGOs for several months on a campaign to prevent human rights violations during police operations in Maré, explained: “Maré lost ten people last week. This cannot pass by without recognition, responsibility and humility from the State. It needs to be recognized that it was an error, that it shouldn’t have been like this and from now on commit to not entering into favela territories this way ever again.”