For the original by Guiliander Carpes in Portuguese on Terra click here. 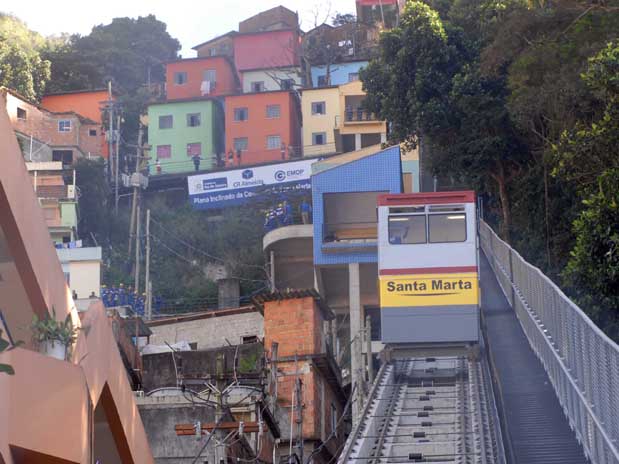 The pacification of favelas in Rio de Janeiro’s South Zone has brought greater security to previously dangerous areas. And in the wake of this step forward, prices have increased on these hillsides. Real estate speculation and threats of removal are now obliging (or luring) residents who have roots in the communities to find a new place to live.

When services such as banks, electric utilities and cable TV entered the favela, many people began to feel compelled to leave – because they don’t have enough money to stay or want to make a saving on the property they have. According to a study by Fundação Getúlio Vargas, rent costs in such communities of Rio de Janeiro have increased by 6.8% more than in the affluent neighborhoods of the city, being that property values in the South Zone have increased by 45% on average over the last two years according to the Housing Union (SECOVI). But there are specific cases where appreciation has surpassed 100%.

“We came to the favela three years ago and have already lived in three different places. At the start we were paying R$300 and now the rent is R$600. The favela is improving a lot, but still it’s not comparable with the set-up in a normal neighborhood,” said Victor Pereira, who works in a home appliances store in Botafogo and lives in the Santa Marta favela.

It is very easy to see renovation work and the vertical expansion of houses within the community. Formally small scale shacks now have two or three floors, a terrace and even a barbecue area. “There are people building additions to their homes and renting rooms to get more money and but even so it is increasingly difficult to find a place with an acceptable standard of living,” he added.

These properties have also increased in value. In Vidigal, a favela between the affluent neighborhoods of Leblon and São Conrado, a large house with a terrace can cost up to R$700,000 (US$313,000). A Terra reporter found a property selling for R$500,000 in the Chapéu Mangueira favela in Leme, and started ‘negotiations’ for a two bedroom, three bathroom home with a covered terrace, coming to a total of 119 square meters, next to the incline of Santa Marta. This was with no official documents, only a letter indicating possession – such documents are gradually being distributed.

“I will sell it for R$170,000 and you can visit the property anytime you want,” said the resident, who identified himself only as Dinho. When the reporter asked the motive behind selling the property, the response was, “I’ve lived here for over 10 years and I think it’s time for me to go back to my city in the Northeast.”

Real estate speculation is also an explanation on the tip of the tongue of residents threatened by removals by the Municipal Housing Secretariat (SMH) at the top of Santa Marta. The building project which will include 64 units of 37 square meters–at a total cost of R$8.7 million–for relocating families is being constructed on risky terrain on a former landfill site, claimed threatened residents.

“Rumors always contain a grain of truth. Many people have said they want to build restaurants or houses for gringos here. I no longer care about the view, I’ve lived in the favela for 33 years, but there are many people who come up here just to look. It’s very pretty,” said Jocimara Liberato, who lives right at the top of the community in a small house with her husband and three children. There are another 54 houses in the same condition as hers and about 150 people threatened by the plans.

Jocimara says that the city government is no longer working on containing the hillsides in the area and that residents are required to pay electricity bills. The Terra reporter arrived at her house on the same day as one of those bills and the charge was R$48. “This is cheap. I’ve already been charged R$105. And I only have an electric shower at home. I pay for public street lighting but you don’t find it here. If you don’t tap into the electricity you can’t see anything at night.”

Pressured by both rising costs and the city government, many people have chosen to leave the hillside, according to the resident. “People are overcome with fatigue and are leaving.”

The State Company for Public Works (Emop) says the construction site for relocated residents is not on risky terrain, according to a report from the Institute of Geotechnical Engineering (Geo-Rio). Work is scheduled for completion in October 2013, when removals should begin. City authorities plan the emptying of the top of Santa Marta hill, the destruction of homes and new work on containing the slopes.

If the state and city government’s schedule is met, just before the 2014 World Cup, it will be possible to get a real sense of the results experienced in the first community which received a UPP.