For the original by Fabíola Gerbase in Portuguese on O Globo click here.

One of the founders of Observatório de Favelas (Favela Observatory) in Maré, the geographer, educator and social activist Jailson de Souza e Silva accumulates publications and projects in his quest to build a new perspective on popular communities. 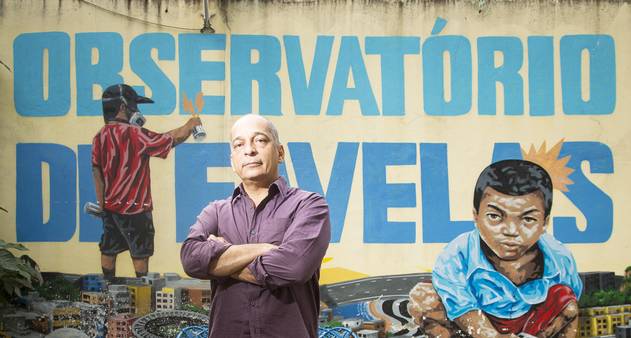 Rio–A man with an easy smile, Jailson de Souza e Silva didn’t feel at ease when asked to produce it a few times last Wednesday afternoon, July 7. While posing for photos for this story at the entrance of the Observatório de Favelas (Favela Observatory), a civil organization he created with friend Jorge Barbosa in Maré in 2001, Jailson reflected that it was not a time when the community was full of smiles. Just over a week after the death of ten people in a BOPE raid into the Nova Holanda favela, part of the Complexo da Maré, the 53-year-old geographer, educator and social activist tried, again, to digest a violent episode occurring in the place he moved out from in 1995 to flee the everyday war. At that time, he went with his family to Niterói (Rio’s sister city across the bay), but the connection with Maré remained. With the creation of the Observatory and the proposal to influence public policies towards the urban periphery, Jailson went on to help the group of favelas squeezed between Avenida Brasil and the Linha Vermelha highways to write their own history and have a stronger voice in the city.

This history is intertwined with Jailson’s own path. The youngest son of Northeastern migrants and born in a community in Brás de Pina where he lived for 11 years without running water, he had a childhood marked by street fights. The violence only stopped when he read. Three times in this interview, Jailson said he was saved by literature. Today, without religion and agnostic, he recounts how he became active in the Catholic Church at the age of 13. He stopped fighting once and for all, and discovered the power of speech and began to think about the issue of inequality. Working ten hours a day as a delivery man, he took the entrance exam to study geography at Rio de Janeiro Federal University (UFRJ). To the dismay of his father, who was a military man and thought that the course was somewhat communist, Jailson passed.

Already at college, one fine day he came across metaphysics. A classmate discussed the concept, which he had never heard of. But the study of the (human) being as (a) being, or metaphysics, didn’t put him off academic life: Jailson ultimately attained a doctorate in Sociology of Education at Rio’s Pontifical Catholic University (PUC). What was really difficult in college was facing blatant prejudice from the professor of the Didactics of Geography class, which he, incidentally, has delivered since 1992 as a professor at the Fluminense Federal University.

“She said I was black, suburban and communist, because I was from an academic center. She even requested I be expelled, alleging that I didn’t have the disposition to be a teacher. On the day of my presentation on a book, she cast me in front of the class, turned to my best friend and asked, ‘Don’t you think he’s offended me a lot?’ I tried to speak and she just told me to shut up. While she complained, I began writing on the board: ‘You are authoritative, rude, arrogant, ill-mannered.’ Everyone was terrified. She read, looked at me, then the class and said: ’I am sure that you all think this too. At least he has the courage to say so. Ten for him, zero for you lot.’ I was amazed. Then I learned that it is better to rebel against unjust situations than it is to just accept them. This story marks my life. I had to work through this anger for years.”

The difficulty faced by students from working class backgrounds to stay in university caught the attention of the Observatory in one of its first projects, Conexões de Saberes (Knowledge Connections). Created in 2002, the proposal was to give financial support to students that, in turn, would produce research on their places of origin. One of the Observatory’s principal fronts of action began to crystallize: training of students and research. Six years later, the program became public policy and was taken up by the Ministry of Education. Previously, the Observatory managed to have 2,000 scholars at 33 universities. More recently, its Popular School of Critical Communication (ESPOCC) began to train youth in fields such as audiovisual, digital culture and affirmative advertising. Today the Observatory has around 350 students enrolled in its projects.

“There are many intellectuals from the favelas speaking for the favelas today. No longer is it just the middle sectors in that role. I am an intellectual of the periphery and I am proud of that, as I am proud of my name. Jailson is a typical name for a northeastern migrant. Souza e Silva are the most common [names] in Brazil. But I hate this talk that I’m a nice guy, a hero. This was the way I found in order to give meaning to my life,” says Jailson, father of three, who says his only luxuries are a taste for good beer and leather rucksacks. “We are looking to change the image of the favela, always characterized by its failings. We assert that it has strength, creativity. The favela is the city, it’s not a problem. Our pragmatic utopia is to build a city where its people recognize themselves for their differences and their search for equality.”

A fundamental part of this quest for Jailson is to guarantee that public security become a right of the communities’ residents. In this sense, a recent project of the Observatory and partnering organizations began to advise residents of Maré not to accept, for example, police entry into their homes without a legal warrant. Such action helps pave the way for the Pacifying Police Unit (UPP) installation process in Maré, which was announced for March of this year but has not yet started. Jailson regrets that on the night of the BOPE operations agents invaded homes. One of them was the home of his 32 year-old foster son, Rodrigo.

“They came in asking if he was hiding drugs and money, where he had got hold of such a nice watch, a cool phone. They said that he was a thief. They were terrifying. This is what it is to be young and black in a favela. Sometimes, they say that we protect gangs, but our concern is the residents,” says Jailson, who has suffered threats from drug trafficking gangs from other favelas, militias and the police. “Thinking about the UPP, I think it is a great improvement over the logic of war and extermination. The problem is that the logic of police occupation continues. The rules must come from City Hall, as in the rest of Rio, not from the police. What does the captain of the UPP have to do with a mototaxi, permit or funk party? This is violence coming from the police themselves. The state cannot transfer to them the responsibility of organizing the territory. The UPP that we want is a Public Policy Unit. We want the State to stop being divided and implement equal policies throughout the city.”

The notion of the divided State, as opposed to the ‘Divided City,’ the title of an emblematic book by journalist Zuenir Iconic Ventura, is for Jailson closer to the reality of the urban periphery. In the book ‘The New Carioca,’ written with Jorge Barbosa and Marcus Vinicius Faustini, Jailson included a letter to Zuenir, explaining why he sees the State as a divided entity.

Zuenir says, “I spent ten months visiting Vigário Geral to write the book, but of course I have the utmost respect for the inside view. My view was one of estrangement. Jailson is a man of Maré. I am (an outside) witness. I admire his work. These are actions in the periphery that unite the divided city.”

Filmmaker and theatre director, Faustini believes one of the main contributions of the activist is theoretical: “Jailson is the first theorist with the view that the favela is not a mere space, but a place of desiring subjects. He influences activists, artists and other theorists with this. In his doctoral thesis, he shows the extent to which the education system only considers the desires of the middle class.”

As far as it depends on Jailson, the next and most ambitious project of the Observatory may subvert the logic of this system. In 2018, he expects to see the Maré University Center up and running, a public institution, but initially not state, with eight undergraduate courses. For him, the challenge will be to develop innovative teaching methodologies. The plan is to be registered with the Ministry of Education and Culture in 2017, the year of Jailson’s (theoretical) retirement.

“When I retire, I hope to just take care of this in life. Have you ever imagined a campus in Maré?”