For the original in Portuguese on Pela Moradia click here.

Families occupy the steps of the Finance Ministry building in downtown Rio.

Approximately 50 people, residents of the Horto and Vila Autódromo communities, along with the National Movement of Housing Vindication (MNLM, by the Portuguese acronym) held a vigil Wednesday, July 17th, at the entrance of the Ministry of Finance building, located at 375 Av. Presidente Antônio Carlos. The event began after a meeting with the families and Marina Esteves, the Secretary for National Heritage (SPU, by the Portuguese acronym).

At the meeting residents demanded that the inter-ministerial commission’s decision be revised to allow the families to remain in Horto. They also demanded the implementation of the 2010 plan by the Federal University of Rio de Janeiro (UFRJ) and the SPU to grant land titles. Other conditions include the transformation of four abandoned buildings belonging to Brazil’s social security agency (INSS) in downtown Rio into affordable housing, and the implementation of the Popular Urbanization Plan for Vila Autódromo developed by the UFRJ Institute of Urban and Regional Planning.

The families remained on the steps of the building until the morning of July 18, to coincide with a meeting in Brasília of the President with Minister Gilberto Carvalho and representatives of national organizations that are demanding housing and the granting of land titles, including the MNLM, the CMP (Center for Popular Movements), the União Nacional de Moradia Popular and CONAM (Confederação Nacional das Associações de Moradores).

In addition, legislation to change the Code of Civil Procedures is pending in Congress. The organizations are insisting that repossession injunctions be granted only when the social function of the property in question is firmly established. 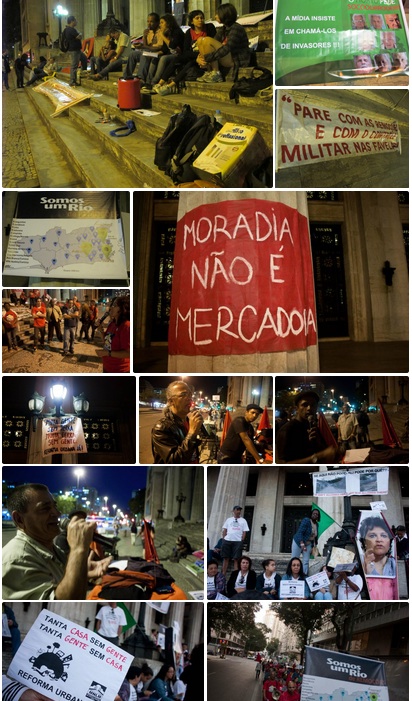