You don’t respect me as a citizen with full rights. I don’t respect your initiatives, and laws which I didn’t participate in creating.

Favelas are the greatest proof that we can progress free of what has today become a “someone,” the immense and all powerful organism, the synthesis of centralization, of authority, which dominates political, economic and social power: the State. Which, via laws created without consulting us, which we’re not even encouraged to get to know, the State subdues us and confines us in the illusionary discourse that it is representing us and thinking of the social good.

The State has never been present in an effective way in the favelas, has never showed an interest in their development. Open sewage, lack of adequate housing, general difficulties of diverse sorts, in addition to terrible education have always guaranteed easy votes. In this so-called democracy, what is advertised as “the weapon of the poor,” the vote, when not violated, is given willingly through the promise of some “cure” for a seemingly timely demand (vote buying). This democracy where voting is an obligation.

Guided purely by capitalism, partisan politicians use public resources as if they were property of the state, forgetting that the State is not a ‘someone’ who can own property, but that it is comprised of administrative divisions which belong to all citizens. Following this misunderstanding of the State as an individual, top-down “public policies” are created which have no meaningful connection to reality. Take the favelas, where there is no popular participation in the development of policies which will directly affect people’s day-to-day life; a perfect example of which is the public security policy of the Pacifying Police Unit (UPPs).

As is common when speaking against the UPP, we are accused of being defenders of drug traffickers, and much worse… The real questions are very simple: How has the drug traffic come to exist? And how has it become so financially powerful? How do drugs and arms get into the favelas? A lot of people in suits are getting rich with this!

Beyond putting a stop to the drug traffic (and knowing that this is very lucrative for specific politicians and oligopolies), it is important to work at the foundation, improve education, respect human rights and look after our children, in order to break the traffic at its roots. However, to be represented by the State, in the “democracy” we live in, means precisely to strengthen the cycle of dependency and survival which leads our young people to choose the path of crime, of which there is frequently no return.

The UPP is nothing! It is not this marketing policy of “Pacification” that will block the diverse entry points which lead a young dreamer to set foot in a risky life. No one dreams of becoming a drug trafficker! No mother wants to bury her son! We can no longer accept empty discourses which circle around superficiality.

We have prisons that dehumanize, treat people as animals, teach them not to feel. Places that should be for recuperation, but end up doing the opposite. We have a society that only uses the word ‘miscegenation’ to seem interesting. For prejudice is alive and kicking everywhere. Particularly with ex-convicts.

The UPP is no more than a re-election policy, created with no interest in the well-being of the favela population. It is merely the arm of the State which functions to “keep order,” which is very different from the discourse of “bringing peace.”

Peace without voice is not peace, it’s FEAR. — Marcelo Yuka

The UPP is like George Orwell’s 1984, like the “big brother” fencing us in on all sides. The police are defenders of the “State as someone,” carrying out orders to defend it, even when the State totally violates citizen rights. Not only in the favelas, but also in the protests. It has historically been like this! 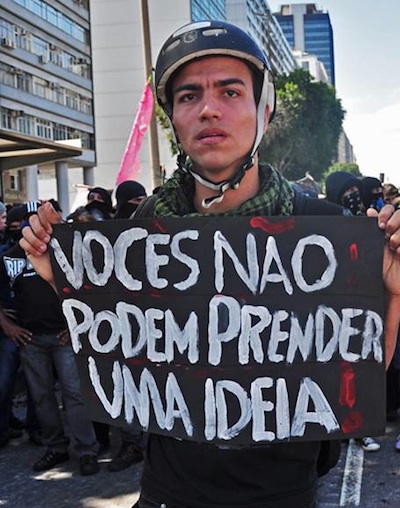 When the UPP arrives in the favelas, it becomes a reference, example of monopoly, a bull-dozing intervention which proposes the “State as someone” in the area: complete and authoritative territorial control. An example of this is how a security institution becomes the main channel of mediation between the state and the demands from the favela, even more so, it is entrusted with making decisions over art and culture. That is truly surreal!

Annulling Resolution 013 informally is easy. To pacify in propaganda, even more so. What is difficult to forget is what is tattooed onto people’s retinas: hatred exercised by police towards the favela population through abuse, arbitrariness, disrespect, violations, aggression and assassinations. The UPP pacification is only containment of the popular classes and armed authoritarianism! An unacceptable policy!

Proudhon’s interpretation is very interesting: government of man by man is servitude. “To be governed is to be inspected, spied on, directed, legislated, regulated, docketed, indoctrinated, preached at, controlled, assessed, weighed, censored, ordered about, by men who have neither the right, nor the knowledge, nor the virtue… To be governed is to be at every operation, at every transaction, noted, registered, enrolled, taxed, stamped, measured, numbered, assessed, licensed, authorized, admonished, forbidden, reformed, corrected, punished. It is, under the pretext of public utility, and in the name of the general interest, to be placed under contribution, trained, ransomed, exploited, monopolized, extorted, squeezed, mystified, robbed; then, at the slightest resistance, the first word of complaint, to be repressed, fined, despised, harassed, tracked, abused, clubbed, disarmed, choked, imprisoned, judged, condemned, shot, deported, sacrificed, sold, betrayed; and, to crown all, mocked, ridiculed, outraged, dishonored. That is government; that is its justice; that is its morality.”

For the demilitarization of the Military Police!
The State that kills – never again!

— By Raull Santiago, from the  Occupy Alemao Collective (Ocupa Alemão).