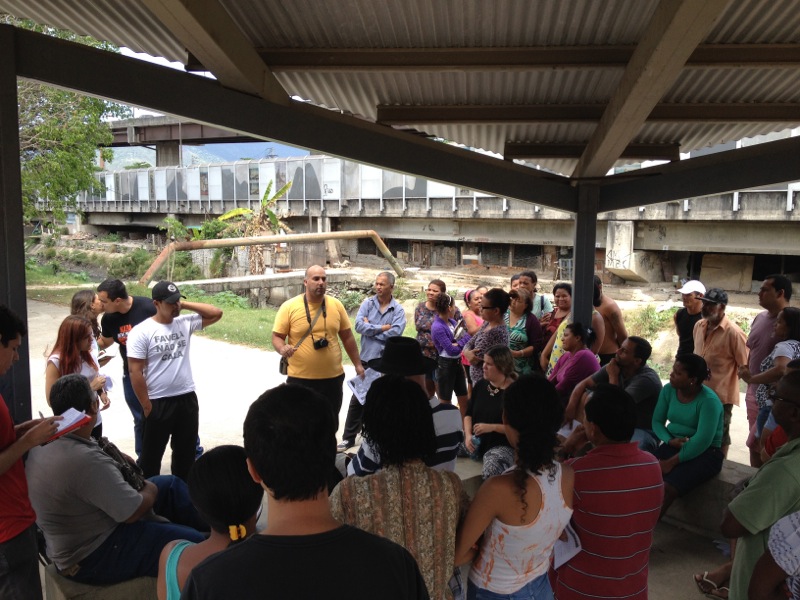 “The solution to your problems does not come from the outside!” André Constantine proclaimed before a group of residents at a meeting in Complexo do Caju on Sunday, October 6. “We are here, also ‘favelados,’ feeling your same pain,” the Favela Não Se Cala activist continued. “We are here in solidarity with the struggle of Caju.” Members of the Free Pass Movement and residents from other favelas also took part in the meeting.

Sunday’s meeting represents the first step in the “organic, non-partisan, and participatory” process of incorporating existing grassroots mobilization in Caju into the citywide activist network Favela Não Se Cala. André urged residents to see the challenges they faced in Caju–including severe air pollution from neighboring factories, geographic segregation due to cross-cutting highways and surrounding industrial equipment, and the threat of eviction in order to build an overpass linking two major roadways–as part of what he says is the broader model of urban development underway in Rio that favors private interests at the expense of the city’s poor. 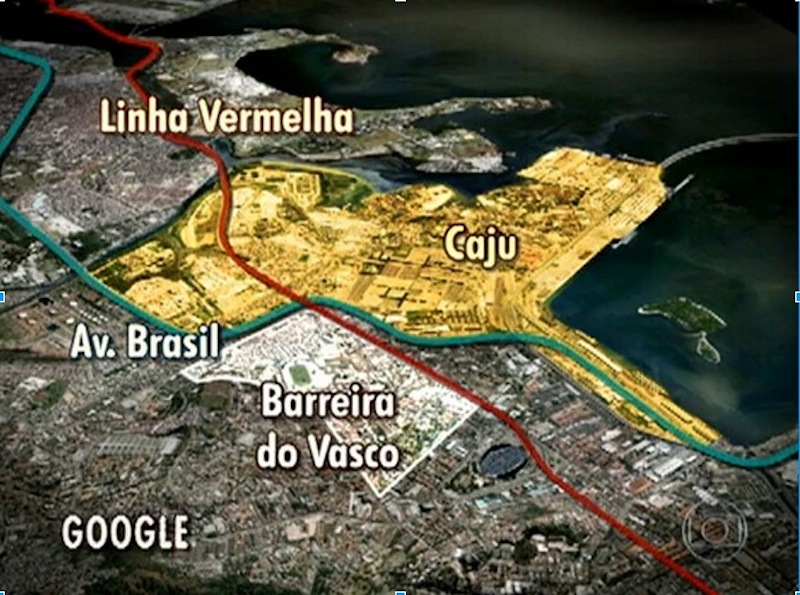 Residents of Caju, which is located at the northern edge of Rio’s Port Region, fear their community is becoming the industrial dumping ground for the City’s port revitalization project, Porto Maravilha. Caju is already a victim of exclusionary urban planning strategies and historically low investment in public services such as healthcare and education. The burden from the port revitalization includes environmental damage from industrial development and a rise in traffic as well as planned evictions to allow for the construction of an overpass connecting the Linha Vermelha highway to the Rio-Niteroi Bridge.

In a statement celebrating the recent arrival of a Pacifying Police Unit (UPP) in Complexo do Caju in March of this year, Governor Sergio Cabral referred to the UPP installation as “the rebirth of the region” and claimed the area “needs the UPP for the residents and even for the economic aspect [as] the area brings in nearly R$1 billion in taxes per year for the city.” At the meeting on Sunday, Caju residents conveyed a different story, one in which promised upgrades in sanitation and infrastructure have not been fulfilled, and in which the arrival of the UPP is the first in a series of steps to control the population and strategically consolidate the area into an industrial park. 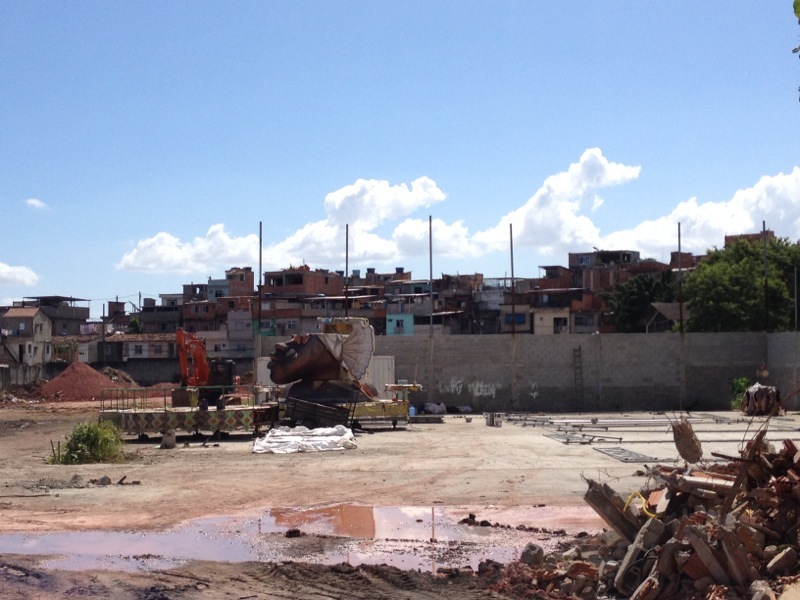 Myllena Cunha, a young energetic community leader and student at the Fluminense Federal University (UFF), challenged the government interventions in the region: “Why would you close schools and hospitals in the neighborhood with one of the lowest Human Development Index figures in the city?” she asked. “The movement should be reversed. Why does the governor send an invasion of the UPP and not an invasion of schools and hospitals?”

Alexandre Moicano, another organizer from Caju, declared that the proposed overpass–conceived without community input and with work originally set to begin in January of this year–will inevitably displace residents. Both he and André warned that the City’s claim that only a few houses will initially be removed could result in many more removals down the line.  André explained that municipal employees use the tactic of negotiating with individual families in an attempt to fragment resistance and cause it to fail. 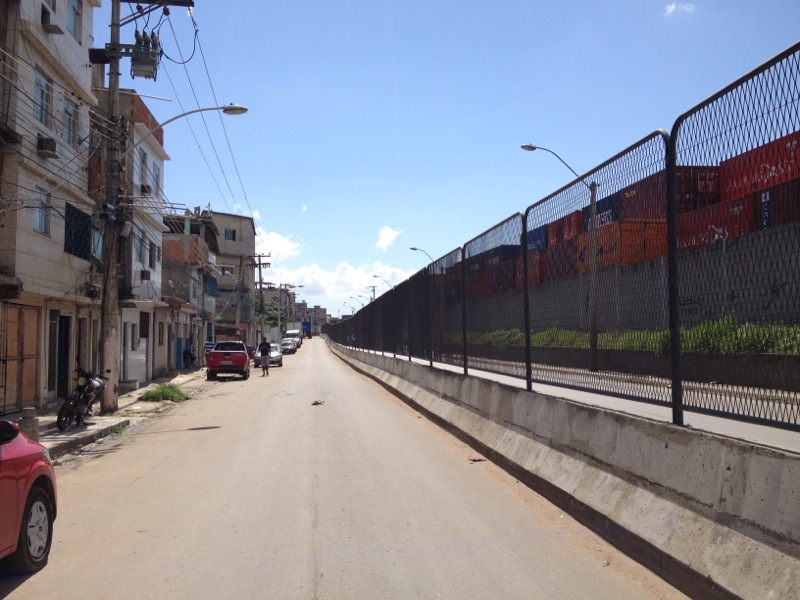 Health risks and environmental degradation threaten residents of the Caju favelas, which are enclosed on all sides by access routes, parking for trucks, highways, factories, and cemeteries. “Not a single project considers the quality of life here,” explained Alexandre, going on to say that the newly launched asphalt plant likely violates environmental regulations given its proximity to residential areas, and that the levels of air pollution must be among the highest in Rio. Though the director of the Caju health center has requested resources to study air quality in the area, Moicano fears that the results of this research would be so damaging to the Mayor’s image that they will not be released. “We do not know where to look for the data,” he explained. “The research was done, however the information is not shared with us.”

Nearly 80 community organizers and residents were present at the Praça do Campinho in the Chatuba favela to discuss means of expressing grievances and becoming protagonists in the struggle. The assembled crowd grew over the course of the two-hour meeting and, by the end, even the elderly men playing dominoes in the corner of the pavilion were drawn into the discussion. Fiery speeches situated Caju’s struggles alongside those of diverse favelas across the city, in which residents are either being forcibly removed or pushed out through processes of gentrification and rising costs of living. Throughout the meeting, one Favela Não Se Cala organizer passed out “Manifesto Against Removals” pamphlets, a document written in powerful and accessible language that captured the spirit of the movement. 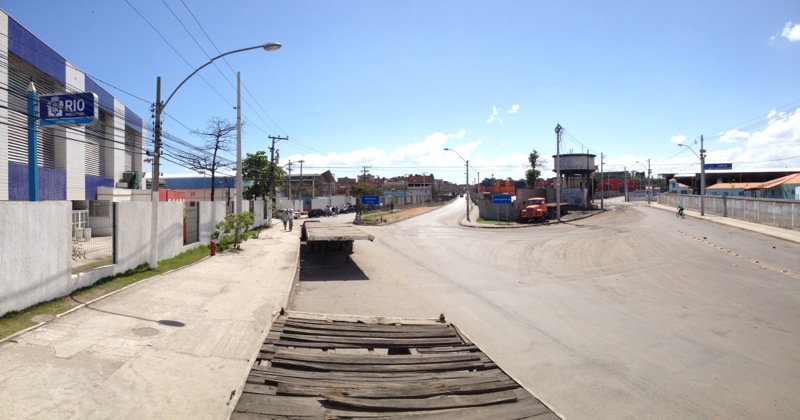 Myllena explained tangible steps that Favela Não Se Cala will take toward justice for residents and highlighted its experience aggregating and articulating resistance struggles throughout the city. Organizers plan to work with a technical team in the coming weeks that includes architects to assess the impact of current and future public works projects and lawyers to denounce coercive tactics used by City authorities to remove families.

Leaders emphasized the importance of community participation and solidarity in these early stages of mobilization. “We can bring architects and engineers to evaluate what the impact of this overpass will be, but this apparatus won’t help if there isn’t internal organization,” André explained. The meeting concluded with the collection of signatures and contact information for the soon-to-be-created Residents’ Commission and the announcement of the next meeting on Sunday, October 20, with the technical team.